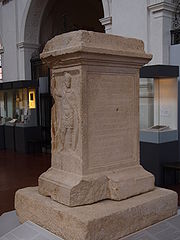 The Juthungi were a Germanic tribe in the region north of the rivers Danube
Danube
The Danube is a river in the Central Europe and the Europe's second longest river after the Volga. It is classified as an international waterway....
and Altmühl
Altmühl
The Altmühl is a river in Bavaria, Germany. It is a left tributary of the Danube and is approximately 230 km in length.The source of the Altmühl is located close to the city of Ansbach. From here the river runs southeastwards as a narrow brook to enter the Altmühlsee north of Gunzenhausen...
in the modern German state of Bavaria
Bavaria
Bavaria, formally the Free State of Bavaria is a state of Germany, located in the southeast of Germany. With an area of , it is the largest state by area, forming almost 20% of the total land area of Germany...
.

The tribe was mentioned by the Roman
Roman Empire
The Roman Empire was the post-Republican period of the ancient Roman civilization, characterised by an autocratic form of government and large territorial holdings in Europe and around the Mediterranean....
historians Publius Herennius Dexippus and Ammianus Marcellinus
Ammianus Marcellinus
Ammianus Marcellinus was a fourth-century Roman historian. He wrote the penultimate major historical account surviving from Antiquity...
. The meaning of their name is “descendants”, and refers to the ancient Suebi
Suebi
The Suebi or Suevi were a group of Germanic peoples who were first mentioned by Julius Caesar in connection with Ariovistus' campaign, c...
an tribe of the Semnoni
Semnoni
thumb|350px|The Semnones are located near the centre of the map. The orange area shows one view of the extent of the [[Suebi]]an tribes in the first century AD.The Semnones were a Germanic tribe which was settled between the Elbe and the Oder in the 1st century when they were described by Tacitus...
.

The Juthungi invaded Italy
Italy
Italy , officially the Italian Republic languages]] under the European Charter for Regional or Minority Languages. In each of these, Italy's official name is as follows:;;;;;;;;), is a unitary parliamentary republic in South-Central Europe. To the north it borders France, Switzerland, Austria and...
in 259–260, but on their way back they were defeated near Augsburg
Augsburg
Augsburg is a city in the south-west of Bavaria, Germany. It is a university town and home of the Regierungsbezirk Schwaben and the Bezirk Schwaben. Augsburg is an urban district and home to the institutions of the Landkreis Augsburg. It is, as of 2008, the third-largest city in Bavaria with a...
on 24–25 April 260 by Marcus Simplicinius Genialis (this is recorded on a Roman memorial stone found in 1992). At this time the Roman Empire
Roman Empire
The Roman Empire was the post-Republican period of the ancient Roman civilization, characterised by an autocratic form of government and large territorial holdings in Europe and around the Mediterranean....
lost the Limes
Limes
A limes was a border defense or delimiting system of Ancient Rome. It marked the boundaries of the Roman Empire.The Latin noun limes had a number of different meanings: a path or balk delimiting fields, a boundary line or marker, any road or path, any channel, such as a stream channel, or any...
area in this region. Between 356 and 358 the Juthungi and the Alamanni invaded the province of Raetia
Raetia
Raetia was a province of the Roman Empire, named after the Rhaetian people. It was bounded on the west by the country of the Helvetii, on the east by Noricum, on the north by Vindelicia, on the west by Cisalpine Gaul and on south by Venetia et Histria...
, and destroyed Castra Regina
Regensburg
Regensburg is a city in Bavaria, Germany, located at the confluence of the Danube and Regen rivers, at the northernmost bend in the Danube. To the east lies the Bavarian Forest. Regensburg is the capital of the Bavarian administrative region Upper Palatinate...
(the Roman capital of the province, and one of the biggest Roman military camps in south Germany, with massive stone walls and a village). A second invasion of Raetia in 383 was repelled by an army of Alans
Alans
The Alans, or the Alani, occasionally termed Alauni or Halani, were a group of Sarmatian tribes, nomadic pastoralists of the 1st millennium AD who spoke an Eastern Iranian language which derived from Scytho-Sarmatian and which in turn evolved into modern Ossetian.-Name:The various forms of Alan —...
and Huns
Huns
The Huns were a group of nomadic people who, appearing from east of the Volga River, migrated into Europe c. AD 370 and established the vast Hunnic Empire there. Since de Guignes linked them with the Xiongnu, who had been northern neighbours of China 300 years prior to the emergence of the Huns,...
. Between 429 and 431 the Roman general Aëtius
Flavius Aëtius
Flavius Aëtius , dux et patricius, was a Roman general of the closing period of the Western Roman Empire. He was an able military commander and the most influential man in the Western Roman Empire for two decades . He managed policy in regard to the attacks of barbarian peoples pressing on the Empire...
also fought against the Juthungi in Raetia.