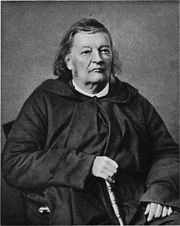 Justinus Andreas Christian Kerner (September 18, 1786 – February 21, 1862) was a German
Germany
Germany , officially the Federal Republic of Germany , is a federal parliamentary republic in Europe. The country consists of 16 states while the capital and largest city is Berlin. Germany covers an area of 357,021 km2 and has a largely temperate seasonal climate...
poet
Poet
A poet is a person who writes poetry. A poet's work can be literal, meaning that his work is derived from a specific event, or metaphorical, meaning that his work can take on many meanings and forms. Poets have existed since antiquity, in nearly all languages, and have produced works that vary...
and medical writer.

Here he completed his Reiseschatten von dem Schattenspieler Luchs (1811), in which his own experiences are described with caustic humour. He next collaborated with Uhland and Schwab in the Poetischer Almanach for 1812, which was followed by the Deutscher Dichterwald (1813), and in these some of Kerner's best poems were published. In 1815 he obtained the official appointment of district medical officer (Oberamtsarzt) in Gaildorf, and in 1818 was transferred to Weinsberg
Weinsberg
Weinsberg is a town in the north of the German state Baden-Württemberg. It was founded ca. 1200 and is situated in the Heilbronn district. The town has about 11,800 inhabitants. It is noted for its wine...
, where he spent the rest of his life

His house, the site of which at the foot of the historical Schloss Weibertreu was presented to him by the townspeople, became a mecca for literary pilgrims, all of whom were made welcome. Gustav IV Adolf of Sweden
Gustav IV Adolf of Sweden
Gustav IV Adolf of Sweden also Gustav Adolph was King of Sweden from 1792 until his abdication in 1809. He was the son of Gustav III of Sweden and his queen consort Sophia Magdalena, eldest daughter of Frederick V of Denmark and his first wife Louise of Great Britain. He was the last Swedish...
came with a knapsack on his back. The poets, Christian Friedrich Alexander von Württemberg and Nikolaus Lenau
Nikolaus Lenau
Nikolaus Lenau was the nom de plume of Nikolaus Franz Niembsch Edler von Strehlenau , was a German language Austrian poet.-Biography:...
were constant guests, and in 1826 Friederike Hauffe (1801–1829), the daughter of a forester in Prevorst, a somnambulist and clairvoyante, arrived; she forms the subject of Kerner's famous work Die Seherin von Prevorst, Eröffnungen über das innere Leben des Menschen und über das Hineinragen einer Geisterwelt in die unsere (The Seeress of Prevorst, revelations of the human inner life and about the penetrations of the spirit world into ours, 1829; 6th ed., 1892). In 1826 he published a collection of Gedichte which were later supplemented by Der letzte Blütenstrauß (1852) and Winterblüten (1859). Among others of his well-known poems are the charming ballad Der reichste Fürst; a drinking song, Wohlauf, noch getrunken, and the pensive Wanderer in der Sägemühle. 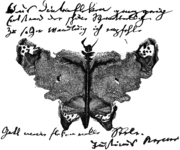 In addition to his literary productions, Kerner wrote some popular medical books, dealing with animal magnetism
Animal magnetism
Animal magnetism , in modern usage, refers to a person's sexual attractiveness or raw charisma. As postulated by Franz Mesmer in the 18th century, the term referred to a supposed magnetic fluid or ethereal medium believed to reside in the bodies of animate beings...
, a treatise on the influence of sebacic acid
Sebacic acid
Sebacic acid is a dicarboxylic acid with structure 8, and is naturally occurring.In its pure state it is a white flake or powdered crystal...
on animal organisms, Das Fettgift oder die Fettsäure und ihre Wirkung auf den tierischen Organismus (1822); a description of Wildbad and its healing waters, Das Wildbad im Königreich Württemberg (1813); while he gave a pretty and vivid account of his youthful years in Bilderbuch aus meiner Knabenzeit (1859); and in Die Bestürmung der württembergischen Stadt Weinsberg im Jahre 1525 (1820), showed considerable skill in historical narrative.

In 1851 he was compelled, owing to increasing blindness, to retire from his medical practice, but he lived, carefully tended by his daughters, at Weinsberg until his death. He was buried beside his wife, who had died in 1854, in the graveyard of Weinsberg, and the grave is marked by a stone slab with an inscription he himself had chosen: Friederike Kerner und ihr Justinus.


Association with George Rapp and the Harmony Society