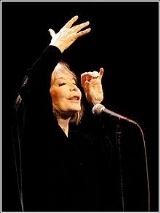 Encyclopedia
Juliette Gréco, ʒy.ljɛt gʁe.ko — also Michelle – (born 7 February 1927) is a French actress and popular chanson
Chanson
A chanson is in general any lyric-driven French song, usually polyphonic and secular. A singer specialising in chansons is known as a "chanteur" or "chanteuse" ; a collection of chansons, especially from the late Middle Ages and Renaissance, is also known as a chansonnier.-Chanson de geste:The...
singer.

Juliette Gréco was born in Montpellier
Montpellier
-Neighbourhoods:Since 2001, Montpellier has been divided into seven official neighbourhoods, themselves divided into sub-neighbourhoods. Each of them possesses a neighbourhood council....
to a Corsica
Corsica
Corsica is an island in the Mediterranean Sea. It is located west of Italy, southeast of the French mainland, and north of the island of Sardinia....
n father and a mother who became active in the Résistance
Resistance
- Physics :* Electrical resistance, a measure of the degree to which an object opposes an electric current through it* Friction, the force that opposes motion** Drag , fluid or gas forces opposing motion and flow...
, in the Hérault
Hérault
Hérault is a department in the south of France named after the Hérault river.-History:Hérault is one of the original 83 departments created during the French Revolution on 4 March 1790...
département of southern France. She was raised by her maternal grandparents. Gréco also became involved in the Résistance, and was caught but not deported because of her young age. She moved to Saint-Germain-des-Prés
Saint-Germain-des-Prés
Saint-Germain-des-Prés is an area of the 6th arrondissement of Paris, France, located around the church of the former Abbey of Saint-Germain-des-Prés....
in 1946 after her mother left the country for Indochina
Indochina
The Indochinese peninsula, is a region in Southeast Asia. It lies roughly southwest of China, and east of India. The name has its origins in the French, Indochine, as a combination of the names of "China" and "India", and was adopted when French colonizers in Vietnam began expanding their territory...
.

Gréco became a devotee of the bohemian fashion of some intellectuals of post-war France. A famous description of Gréco is that her voice "encompasses millions of poems". She was known to many of the writers and artists working in Saint-Germain-des-Prés, such as Jean-Paul Sartre
Jean-Paul Sartre
Jean-Paul Charles Aymard Sartre was a French existentialist philosopher, playwright, novelist, screenwriter, political activist, biographer, and literary critic. He was one of the leading figures in 20th century French philosophy, particularly Marxism, and was one of the key figures in literary...
and Boris Vian
Boris Vian
Boris Vian was a French polymath: writer, poet, musician, singer, translator, critic, actor, inventor and engineer. He is best remembered today for his novels. Those published under the pseudonym Vernon Sullivan were bizarre parodies of criminal fiction, highly controversial at the time of their...
.

Gréco spent the post liberation years frequenting the Saint Germain cafes, immersing herself in political and philosophical Bohemian culture. As a regular figure at music and poetry venues like Le Tabou
Le Tabou
Le Tabou was a cellar club located at 33 Rue Dauphine in Saint Germain des Pres, Paris. The club opened shortly after Club des Lorientais on 11 April 1947...
on Rue Dauphine
Rue Dauphine
Rue Dauphine is a street in Saint-Germain-des-Prés in the VIe arrondissement of Paris, France.It was named after the Dauphin, son of Henry IV of France.The Pont Neuf crosses the river Seine in front of the Rue Dauphine....
, Greco became acquainted with Miles Davis
Miles Davis
Miles Dewey Davis III was an American jazz musician, trumpeter, bandleader, and composer. Widely considered one of the most influential musicians of the 20th century, Miles Davis was, with his musical groups, at the forefront of several major developments in jazz music, including bebop, cool jazz,...
and Jean Cocteau
Jean Cocteau
Jean Maurice Eugène Clément Cocteau was a French poet, novelist, dramatist, designer, playwright, artist and filmmaker. His circle of associates, friends and lovers included Kenneth Anger, Pablo Picasso, Jean Hugo, Jean Marais, Henri Bernstein, Marlene Dietrich, Coco Chanel, Erik Satie, María...
, even being given a role in Cocteau’s film Orphée in 1949. That same year, she began a new singing career with a number of well-known French writers writing lyrics; Raymond Queneau
Raymond Queneau
Raymond Queneau was a French poet and novelist and the co-founder of Ouvroir de littérature potentielle .-Biography:Born in Le Havre, Seine-Maritime, Queneau was the only child of Auguste Queneau and Joséphine Mignot...
's "Si Tu T’Imagines" was one of her earliest songs to become popular.

Gréco was portrayed by actress Anna Mouglalis
Anna Mouglalis
-Biography:Anna Mouglalis was born in Nantes, Loire-Atlantique, to her Greek father and French mother. She spent her youth in the Var département, before moving back to Nantes with her family. Her father is a doctor and her mother is a masseuse. Until 2001 she studied at the Conservatoire National...
in the film Gainsbourg (Vie héroïque) (2010).

Gréco is featured in "Lovers of Saint-Germain-des-Prés", a chapter written in screenplay format in PARISIANS: An Adventure History of Paris, by Graham Robb (New York: W. W. Norton & Company, 2010).