Guesde was the inspiration for a famous quotation by Karl Marx
Karl Marx
Karl Heinrich Marx was a German philosopher, economist, sociologist, historian, journalist, and revolutionary socialist. His ideas played a significant role in the development of social science and the socialist political movement...
. Shortly before Marx died in 1883, he wrote a letter to Guesde and Paul Lafargue
Paul Lafargue
Paul Lafargue was a French revolutionary Marxist socialist journalist, literary critic, political writer and activist; he was Karl Marx's son-in-law, having married his second daughter Laura. His best known work is The Right to Be Lazy...
, both of whom already claimed to represent "Marxist" principles. Marx accused them of "revolutionary phrase-mongering" and of denying the value of reformist
Reformism
Reformism is the belief that gradual democratic changes in a society can ultimately change a society's fundamental economic relations and political structures...
struggles. This exchange is the source of Marx's remark, reported by Friedrich Engels
Friedrich Engels
Friedrich Engels was a German industrialist, social scientist, author, political theorist, philosopher, and father of Marxist theory, alongside Karl Marx. In 1845 he published The Condition of the Working Class in England, based on personal observations and research...
: "ce qu'il y a de certain c'est que moi, je ne suis pas Marxiste” (“what is certain is that [if they are Marxists], [then] I myself am not a Marxist”).


In the early movement

He was born in Paris
Paris
Paris is the capital and largest city in France, situated on the river Seine, in northern France, at the heart of the Île-de-France region...
on November 11, 1845, on the Ile-St-Louis. He began his career as a clerk in the Interior Ministry
Minister of the Interior (France)
The Minister of the Interior in France is one of the most important governmental cabinet positions, responsible for the following:* The general interior security of the country, with respect to criminal acts or natural catastrophes...
, but, on the outbreak of the Franco-Prussian War
Franco-Prussian War
The Franco-Prussian War or Franco-German War, often referred to in France as the 1870 War was a conflict between the Second French Empire and the Kingdom of Prussia. Prussia was aided by the North German Confederation, of which it was a member, and the South German states of Baden, Württemberg and...
, he was editing Les Droits de l'Homme at Montpellier
Montpellier
-Neighbourhoods:Since 2001, Montpellier has been divided into seven official neighbourhoods, themselves divided into sub-neighbourhoods. Each of them possesses a neighbourhood council....
, and had to take refuge in Geneva
Geneva
Geneva In the national languages of Switzerland the city is known as Genf , Ginevra and Genevra is the second-most-populous city in Switzerland and is the most populous city of Romandie, the French-speaking part of Switzerland...
in 1871 from a prosecution instituted on account of articles which had appeared in his paper in defence of the Paris Commune
Paris Commune
The Paris Commune was a government that briefly ruled Paris from March 18 to May 28, 1871. It existed before the split between anarchists and Marxists had taken place, and it is hailed by both groups as the first assumption of power by the working class during the Industrial Revolution...
. There he read the works of Karl Marx
Karl Marx
Karl Heinrich Marx was a German philosopher, economist, sociologist, historian, journalist, and revolutionary socialist. His ideas played a significant role in the development of social science and the socialist political movement...
. In 1876, he returned to France to become one of the chief French advocates of Marxism
Marxism
Marxism is an economic and sociopolitical worldview and method of socioeconomic inquiry that centers upon a materialist interpretation of history, a dialectical view of social change, and an analysis and critique of the development of capitalism. Marxism was pioneered in the early to mid 19th...
, being imprisoned for six months in 1878 for taking part in the first Parisian International Congress
Second International
The Second International , the original Socialist International, was an organization of socialist and labour parties formed in Paris on July 14, 1889. At the Paris meeting delegations from 20 countries participated...
. He edited at different times Les Droits de l’Homme, Le Cri du peuple, and Le Socialiste, but his best-known organ was the weekly Égalité.

He had been in close association with Paul Lafargue
Paul Lafargue
Paul Lafargue was a French revolutionary Marxist socialist journalist, literary critic, political writer and activist; he was Karl Marx's son-in-law, having married his second daughter Laura. His best known work is The Right to Be Lazy...
, and through him with Karl Marx
Karl Marx
Karl Heinrich Marx was a German philosopher, economist, sociologist, historian, journalist, and revolutionary socialist. His ideas played a significant role in the development of social science and the socialist political movement...
, whose daughter Lafargue had married. It was in conjunction with Marx and Lafargue that he drew up the programme accepted by the National Congress of the French Workers' Party
French Workers' Party
The Parti Ouvrier Français was the first Marxist party in France, created in 1880 by Jules Guesde and Paul Lafargue, Marx's son-in-law...
at Le Havre
Le Havre
Le Havre is a city in the Seine-Maritime department of the Haute-Normandie region in France. It is situated in north-western France, on the right bank of the mouth of the river Seine on the English Channel. Le Havre is the most populous commune in the Haute-Normandie region, although the total...
in 1880, which laid stress on the formation of an international labour party working by revolution
Revolution
A revolution is a fundamental change in power or organizational structures that takes place in a relatively short period of time.Aristotle described two types of political revolution:...
ary methods. The following year, at the Reims
Reims
Reims , a city in the Champagne-Ardenne region of France, lies east-northeast of Paris. Founded by the Gauls, it became a major city during the period of the Roman Empire....
Congress, the orthodox Marxian programme of Guesde was opposed by the "possibilists", who rejected the intransigeant attitude of Guesde for the reformist
Reformism
Reformism is the belief that gradual democratic changes in a society can ultimately change a society's fundamental economic relations and political structures...
policy of Benoît Malon
Benoît Malon
Benoît Malon , was a French Socialist, writer, communard, and political leader....
.


Leader of the intransigents 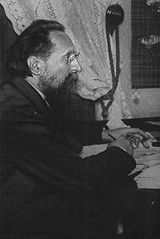 At the Congress of Saint-Étienne
Saint-Étienne
Saint-Étienne is a city in eastern central France. It is located in the Massif Central, southwest of Lyon in the Rhône-Alpes region, along the trunk road that connects Toulouse with Lyon...
, the difference developed into separation. Those who refused all compromise with a capitalist
Capitalism
Capitalism is an economic system that became dominant in the Western world following the demise of feudalism. There is no consensus on the precise definition nor on how the term should be used as a historical category...
government followed Guesde, while the reformists formed several groups. Guesde took his full share in the consequent discussions between the Guesdists, the Blanquists
Louis Auguste Blanqui
Louis Auguste Blanqui was a French political activist, notable for the revolutionary theory of Blanquism, attributed to him....
, the Possibilists
Possibilism (French Socialist)
The Possibilists was a trend in the French socialist movement led by Paul Brousse, Benoît Malon and others who brought about a split in the French Workers' Party in 1882...
, and others. In 1893 he was returned to the Chamber of Deputies
Chamber of Deputies of France
Chamber of Deputies was the name given to several parliamentary bodies in France in the nineteenth and twentieth centuries:* 1814–1848 during the Bourbon Restoration and the July Monarchy, the Chamber of Deputies was the Lower chamber of the French Parliament, elected by census suffrage.*...
for Lille
Lille
Lille is a city in northern France . It is the principal city of the Lille Métropole, the fourth-largest metropolitan area in the country behind those of Paris, Lyon and Marseille. Lille is situated on the Deûle River, near France's border with Belgium...
, with a large majority over the Christian Socialist
Christian socialism
Christian socialism generally refers to those on the Christian left whose politics are both Christian and socialist and who see these two philosophies as being interrelated. This category can include Liberation theology and the doctrine of the social gospel...
and Radical candidates. He brought forward various proposals in social legislation forming the programme of the Workers' Party, without reference to the divisions among the Socialists, and, on November 20, 1894, succeeded in raising a two days' discussion of the collectivist principle in the Chamber.

In 1902 he was not re-elected, but resumed his seat in 1906. In 1903 there was a formal reconciliation at the Reims Congress of the sections of the party, which then took the name of the Socialist Party of France
Socialist Party of France (1902)
The Socialist Party of France was founded in 1902, during a congress in Commentry, by the merger of the Marxist French Workers' Party led by Jules Guesde and the Blanquist Central Revolutionary Committee of Édouard Vaillant....
. All socialist tendencies were then unified in 1905 in the French Section of the Workers' International (SFIO), the French section of the Second International
Second International
The Second International , the original Socialist International, was an organization of socialist and labour parties formed in Paris on July 14, 1889. At the Paris meeting delegations from 20 countries participated...
. Guesde, nevertheless, continued to oppose the reformist policy of Jean Jaurès
Jean Jaurès
Jean Léon Jaurès was a French Socialist leader. Initially an Opportunist Republican, he evolved into one of the first social democrats, becoming the leader, in 1902, of the French Socialist Party, which opposed Jules Guesde's revolutionary Socialist Party of France. Both parties merged in 1905 in...
, whom he denounced for supporting one "bourgeois
Bourgeoisie
In sociology and political science, bourgeoisie describes a range of groups across history. In the Western world, between the late 18th century and the present day, the bourgeoisie is a social class "characterized by their ownership of capital and their related culture." A member of the...
" party against another. In 1900, he had already opposed him on the question of socialist participation to "bourgeois" government. His defence of the principle of freedom of association led him, incongruously enough, to support the religious Congregations against Émile Combes
Émile Combes
Émile Combes was a French statesman who led the Bloc des gauches's cabinet from June 1902 – January 1905.-Biography:Émile Combes was born in Roquecourbe, Tarn. He studied for the priesthood, but abandoned the idea before ordination. His anti-clericalism would later lead him into becoming a...
.

World War I
World War I
World War I , which was predominantly called the World War or the Great War from its occurrence until 1939, and the First World War or World War I thereafter, was a major war centred in Europe that began on 28 July 1914 and lasted until 11 November 1918...
, which threatened France's existence, had the effect of changing the uncompromising attitude of Guesde. In August 1914, Guesde was included in the national unity government of René Viviani
René Viviani
Jean Raphaël Adrien René Viviani was a French politician of the Third Republic, who served as Prime Minister for the first year of World War I. He was born in Sidi Bel Abbès, in French Algeria. In France he sought to protect the rights of socialists and trade union workers.-Biography:His...
as a Minister without Portfolio
Minister without Portfolio
A minister without portfolio is either a government minister with no specific responsibilities or a minister that does not head a particular ministry...
, and continued to serve in that role until the end of 1916. During this period, he adopted patriotic positions and sometimes even nationalist views.

Besides his numerous political and socialist pamphlet
Pamphlet
A pamphlet is an unbound booklet . It may consist of a single sheet of paper that is printed on both sides and folded in half, in thirds, or in fourths , or it may consist of a few pages that are folded in half and saddle stapled at the crease to make a simple book...
s he published in 1901 two volumes of his speeches in the Chamber of Deputies entitled Quatre ans de lutte de classe 1893-1898 (Four years of class struggle).