Gendai budō
Budo
is a Japanese term describing martial arts. In English, it is used almost exclusively in reference to Japanese martial arts.-Etymology:Budō is a compound of the root bu , meaning war or martial; and dō , meaning path or way. Specifically, dō is derived from the Buddhist Sanskrit mārga...
includes such ways as aikido
Aikido
is a Japanese martial art developed by Morihei Ueshiba as a synthesis of his martial studies, philosophy, and religious beliefs. Aikido is often translated as "the Way of unifying life energy" or as "the Way of harmonious spirit." Ueshiba's goal was to create an art that practitioners could use to...
, judo
Judo
is a modern martial art and combat sport created in Japan in 1882 by Jigoro Kano. Its most prominent feature is its competitive element, where the object is to either throw or takedown one's opponent to the ground, immobilize or otherwise subdue one's opponent with a grappling maneuver, or force an...
, jūkendō
Jukendo
is the Japanese martial art of bayonet fighting, and has been likened to kendo . Jukendo techniques are based on sojutsu or bayonet techniques from the 17th century, when firearms were introduced to Japan....
, iaidō
Iaido
is a modern Japanese martial art associated with the smooth, controlled movements of drawing the sword from its scabbard, striking or cutting an opponent, removing blood from the blade, and then replacing the sword in the scabbard...
, karate-do, kendo
Kendo
, meaning "Way of The Sword", is a modern Japanese martial art of sword-fighting based on traditional Japanese swordsmanship, or kenjutsu.Kendo is a physically and mentally challenging activity that combines strong martial arts values with sport-like physical elements.-Practitioners:Practitioners...
, kyūdō
Kyudo
, literally meaning "way of the bow", is the Japanese art of archery. It is a modern Japanese martial art and practitioners are known as .It is estimated that there are approximately half a million practitioners of kyudo today....
, and shorinji kempo
Shorinji Kempo
was established by as a system for self-improvement and training in Japan in 1947 based on Shaolin kungfu ....
. Certain ryūha (schools) of these arts, however, can be classified as koryū
Koryu
is a Japanese word that is used in association with the ancient Japanese martial arts. This word literally translates as "old school" or "traditional school"...
, having been established before the Meiji Restoration
Meiji Restoration
The , also known as the Meiji Ishin, Revolution, Reform or Renewal, was a chain of events that restored imperial rule to Japan in 1868...
(for example, Musō Jikiden Eishin-ryū
Muso Jikiden Eishin-ryu
, is a koryū sword art, and one of the most widely practiced schools of iaijutsu in the world. Often referred to simply as "Eishin-ryū," it claims an unbroken lineage dating back to the sixteenth century....
ha of iaijutsu
Iaijutsu
, the art of drawing the Japanese sword. One of Japanese martial disciplines in education of the classical warrior .-Etymology:"Iaijutsu" was known before the Tokugawa period but it is unclear exactly when the term "iaijutsu" first came into use, or when exactly drawing the katana from its...
is more than 400 years old). 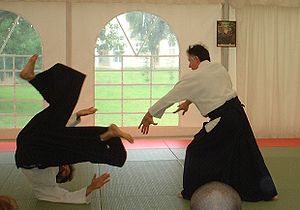 The Japanese art of sumo
Sumo
is a competitive full-contact sport where a wrestler attempts to force another wrestler out of a circular ring or to touch the ground with anything other than the soles of the feet. The sport originated in Japan, the only country where it is practiced professionally...
is often defined as a gendai budō. This definition is incorrect, however, as sumo is, in fact, an ancient art that has attained popularity and media coverage in the modern era.

Gendai budō often have origins in koryū
Koryu
is a Japanese word that is used in association with the ancient Japanese martial arts. This word literally translates as "old school" or "traditional school"...
, or the traditional Japanese martial arts. For example, Kano Jigoro
Kano Jigoro
was the founder of judo. Judo was the first Japanese martial art to gain widespread international recognition, and the first to become an official Olympic sport. Pedagogical innovations attributed to Kanō include the use of black and white belts, and the introduction of dan ranking to show the...
(嘉納 治五郎 Kanō Jigorō, 1860–1938) founded judo in part as an attempt to systematize the myriad traditions of jujutsu
Jujutsu
Jujutsu , also known as jujitsu, ju-jitsu, or Japanese jiu-jitsu, is a Japanese martial art and a method of close combat for defeating an armed and armored opponent in which one uses no weapon, or only a short weapon....
which existed at the time. Kendo similarly derives from the many schools of kenjutsu
Kenjutsu
, meaning "the method, or technique, of the sword." This is opposed to kendo, which means the way of the sword. Kenjutsu is the umbrella term for all traditional schools of Japanese swordsmanship, in particular those that predate the Meiji Restoration...
that evolved over the centuries.

Gendai budō generally stress martial arts
Martial arts
Martial arts are extensive systems of codified practices and traditions of combat, practiced for a variety of reasons, including self-defense, competition, physical health and fitness, as well as mental and spiritual development....
as a study of life principles, for example as a means to refine one's approach to conflict or danger. Most, therefore, agree that it is improper to classify koryū as nothing more than fighting techniques, or to classify budō as merely a show or game. Rather, this perspective suggests that both koryū and gendai budō contain elements of both dō
Do (Way)
A Dō is any one of a number of spiritual, martial, or aesthetic disciplines that evolved in Japan and Korea. The term "Dō" is borrowed from the Chinese philosophical concept of Tao , a word meaning 'way', 'path', 'route', or sometimes more loosely, 'doctrine' or 'principle'...
(path, with spiritual overtones) and jutsu (technique). Many martial artists see the two as fundamentally interconnected, and the difference in emphasis may nonetheless manifest in various ways in content of the instruction, such as the focus on the state of mind during a technique or a focus on the technique itself.

Koryū teaching methods emphasized a sharp and observant mind in the student. Sometimes the teacher would merely demonstrate a technique once and then withdraw to let the students piece it together themselves. The detailed, repeated, and "scientific" explanations of many gendai budō are a marked contrast to this style. This fuels many debates about martial arts pedagogy, and much inquiry into how teachers of either koryū and budō can make their particular type of instruction effective.

These rankings replaced the various certificates awarded within koryū. Gendai budō also generally do not contain the same strong entrance oaths and rituals as koryū, such as the keppan ("blood oath"). Whereas in most gendai budō dojo
Dojo
A is a Japanese term which literally means "place of the way". Initially, dōjōs were adjunct to temples. The term can refer to a formal training place for any of the Japanese do arts but typically it is considered the formal gathering place for students of any Japanese martial arts style to...
all are welcome provided they follow basic rules of conduct, koryū instructors often strictly scrutinize candidates.
The source of this article is wikipedia, the free encyclopedia.  The text of this article is licensed under the GFDL.