Encyclopedia
Juan Soriano was a Mexican
Mexico
The United Mexican States , commonly known as Mexico , is a federal constitutional republic in North America. It is bordered on the north by the United States; on the south and west by the Pacific Ocean; on the southeast by Guatemala, Belize, and the Caribbean Sea; and on the east by the Gulf of...
painter
Painting
Painting is the practice of applying paint, pigment, color or other medium to a surface . The application of the medium is commonly applied to the base with a brush but other objects can be used. In art, the term painting describes both the act and the result of the action. However, painting is...
and sculptor
Sculpture
Sculpture is three-dimensional artwork created by shaping or combining hard materials—typically stone such as marble—or metal, glass, or wood. Softer materials can also be used, such as clay, textiles, plastics, polymers and softer metals...
.

Soriano, son of Rafael Rodríguez Soriano and Amalia Montoya Navarro, was born in Guadalajara
Guadalajara, Jalisco
Guadalajara is the capital of the Mexican state of Jalisco, and the seat of the municipality of Guadalajara. The city is located in the central region of Jalisco in the western-pacific area of Mexico. With a population of 1,564,514 it is Mexico's second most populous municipality...
and displayed his first painting at age 14. He moved to Mexico City
Mexico City
Mexico City is the Federal District , capital of Mexico and seat of the federal powers of the Mexican Union. It is a federal entity within Mexico which is not part of any one of the 31 Mexican states but belongs to the federation as a whole...
in 1935, where after a difficult start he was accepted into the local art scene.

He became a member of the Mexican School cultural movement also featuring Frida Kahlo
Frida Kahlo
Frida Kahlo de Rivera was a Mexican painter, born in Coyoacán, and perhaps best known for her self-portraits....
and poet Octavio Paz
Octavio Paz
Octavio Paz Lozano was a Mexican writer, poet, and diplomat, and the winner of the 1990 Nobel Prize for Literature.-Early life and writings:...
. He also joined the Liga de Escritores y Artistas Revolucionarios
Liga de Escritores y Artistas Revolucionarios
The Liga de Escritores y Artistas Revolucionarios was a Mexican association of revolutionary artists and writers. It was established in the house of its first president Leopoldo Méndez in 1933 in due to the disbanded "Sindicato de Trabajadores Técnicos, Pintores y Escultores" , and was defined as...
.

Soriano experimented with abstract work as well as portraits and self portraits. He also became a sculptor in terracotta, ceramics and later bronze.

In 1957, he was awarded the José Clemente Orozco prize by the government of Jalisco
Jalisco
Jalisco officially Estado Libre y Soberano de Jalisco is one of the 31 states which, with the Federal District, comprise the 32 Federal Entities of Mexico. It is located in Western Mexico and divided in 125 municipalities and its capital city is Guadalajara.It is one of the more important states...
. In 1985, Bellas Artes staged an exhibition in honor of his fifty years in the art world. In 1987, he was awarded the National Art Prize by the Mexican government. The Spanish Government awarded Soriano its Valazquez Plastic Arts Prize. 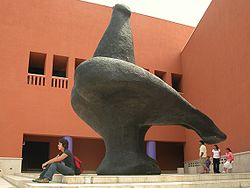 During his career, his works featured in 130 exhibitions held in Mexico, the US, China, France and Poland. Soriano has works on display in public places in Mexico such as a large dove outside the Museum of Contemporary Art in Monterrey
Monterrey
Monterrey , is the capital city of the northeastern state of Nuevo León in the country of Mexico. The city is anchor to the third-largest metropolitan area in Mexico and is ranked as the ninth-largest city in the nation. Monterrey serves as a commercial center in the north of the country and is the...
.