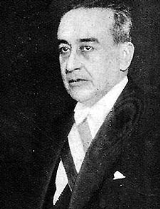 Encyclopedia
Juan Esteban Montero Rodríguez (February 12, 1879 - February 25, 1948) was a Chile
Chile
Chile ,officially the Republic of Chile , is a country in South America occupying a long, narrow coastal strip between the Andes mountains to the east and the Pacific Ocean to the west. It borders Peru to the north, Bolivia to the northeast, Argentina to the east, and the Drake Passage in the far...
an political figure. He served twice as president of Chile
President of Chile
The President of the Republic of Chile is both the head of state and the head of government of the Republic of Chile. The President is responsible of the government and state administration...
between 1931 and 1932.

He was born in Santiago
Santiago, Chile
Santiago , also known as Santiago de Chile, is the capital and largest city of Chile, and the center of its largest conurbation . It is located in the country's central valley, at an elevation of above mean sea level...
, the son of Benjamín Montero and of Eugenia Rodríguez. Juan Esteban Montero studied at the colegio de San Ignacio and at the Universidad de Chile. He graduated as a lawyer on September 16, 1901, and soon after became professor of civil and Roman law at his alma mater. He also worked as a government lawyer and in private practice. He married Graciela Fehrman Martínez, with whom had three children: Juan Esteban, Benjamín and Carmen.

Montero's first incursion in politics was in 1931, when President Carlos Ibáñez del Campo
Carlos Ibáñez del Campo
General Carlos Ibáñez del Campo was a Chilean Army officer and political figure. He served as dictator between 1927 and 1931 and as constitutional President from 1952 to 1958.- The coups of 1924 and 1925 :...
named him Minister of the Interior and Social Welfare. After the resignation of president Ibáñez on July 26, 1931 he reluctantly agreed to serve in similar position to Ibáñez's successor, Pedro Opazo
Pedro Opazo
Pedro Opazo Letelier was a Chilean politician and provisional vice president of Chile in 1931.He was born in Talca, the son of Ursicino Opazo and Margarita Letelier. He completed his studies in his native city, and then attended the Universidad de Chile, where he became a physician...
; just to find himself promoted to president the very next day, after Opazo's resignation. Montero, as a way out of the political impasse, immediately called for presidential elections. In the meanwhile he assumed as Vice President.

Very soon after, Montero accepted the presidential nomination of the Radical Party
Radical Party (Chile)
The Radical Party of Chile was a Chilean political party. It was formed in 1863 by a split in the Liberal Party. Not coincidently, it was formed shortly after the organization of the Grand Lodge of Chile, and it has maintained a close relationship with Chilean Freemasonry throughout its life...
, and in order to qualify, he resigned his vicepresidency on August 20, 1931. The position was assumed by Manuel Trucco
Manuel Trucco
Manuel Trucco Franzani was a Chilean politician and provisional vice president of Chile in 1931.He was born in Cauquenes, the son of Napoleón Trucco Morano and of María Franzani Monigette. He completed his studies in his native city, and at the Instituto Nacional...
. The Trucco administration was only supposed to be a caretaker one, keeping order in the country until the presidential elections. Nonetheless it was faced with very difficult moments such as the Sailors' mutiny
Sailors' mutiny
The Chilean naval mutiny of 1931 was a violent rebellion of the Chilean Navy enlisted men against the government of Vice President Manuel Trucco.-Background:...
in the navy
Chilean Navy
-Independence Wars of Chile and Peru :The Chilean Navy dates back to 1817. A year before, following the Battle of Chacabuco, General Bernardo O'Higgins prophetically declared "this victory and another hundred shall be of no significance if we do not gain control of the sea".This led to the...
, caused by the reduction of the salaries of the enlisted men (September 1-5, 1931), which was controlled only after an aerial bombing of the fleet, but which predicted difficult times ahead.

Supported by the Liberals
Liberal Party (Chile)
The Liberal Party of Chile was a Chilean political party created by a faction of pipiolos in 1849. After the conservative victory in the Chilean Civil War of 1829 the liberals became the principal opposition party to the Conservative Party...
and Conservatives
Conservative Party (Chile)
The Conservative Party of Chile was one of the principal Chilean political parties since its foundation in 1836 until 1949, when it broke apart. In 1953 it reformed as the United Conservative Party and in 1966 joined with the Liberal Party to form the National Party...
as well as the Radicals, Juan Esteban Montero was the clear winner of the presidential elections, obtaining almost 64% of the popular vote, defeating leftist José Santos Salas, a protégé of former President Carlos Ibáñez. He took over on November 15, in the midst of a political and economic chaos that resulted from the market crash of 1929
Wall Street Crash of 1929
The Wall Street Crash of 1929 , also known as the Great Crash, and the Stock Market Crash of 1929, was the most devastating stock market crash in the history of the United States, taking into consideration the full extent and duration of its fallout...
. His program called for the implementation of an austerity program that involved the reduction of public expenditures and public salaries, a downsizing of the public administration and an increase of the foreign debt. Notwithstanding these harsh measures, the depreciation of the currency continued, and inflation soared while the Central Bank reserves were at an all time low. This economic program only managed to cause widespread discontent, while in no way improving the economy, and in turn led to his downfall.

On June 4, 1932, colonel Marmaduke Grove staged a coup d'état by taking over the Air Force base
Chilean Air Force
The Chilean Air Force is the air force of Chile, a branch of the Chilean military.-History:The first step towards the current FACh was taken by Teniente Coronel Pedro Pablo Dartnell, when he founded the Servicio de Aviación Militar de Chile on December 20, 1910, being trained as a pilot in France...
of El Bosque, in Santiago, and demanding the resignation of President Montero. Montero refused to call on the army to put down the coup, and instead chose to resign. That same night, the victorious revolutionaries organized a Government Junta
Government Junta of Chile (1932)
Government Junta of Chile , was a political structure established during the anarchy that followed the resignation of President Carlos Ibáñez del Campo...
composed of retired General Arturo Puga
Arturo Puga
General Arturo Puga Osorio , was a Chilean military officer and Chairman of Government Junta in 1932.On June 4, 1932 he became Chairman of the Government Junta that was established after the resignation of President Juan Esteban Montero...
, Eugenio Matte and Carlos Davila
Carlos Dávila
Carlos Gregorio Dávila Espinoza , was a Chilean political figure, Chairman of Government Junta of Chile in 1932, and Secretary General of the Organization of American States from 1954 until his death in 1955.-Early life:...
, with colonel Grove as their minister of Defense. After this episode, Montero retired completely from politics, and went back to private practice and business. He died in Santiago, on February 25, 1948, at the age of 69.