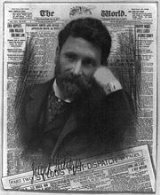 Overview
Joseph Pulitzer born Politzer József, was a Hungarian-American newspaper publisher of the St. Louis Post Dispatch and the New York World
New York World
The New York World was a newspaper published in New York City from 1860 until 1931. The paper played a major role in the history of American newspapers...
. Pulitzer introduced the techniques of "new journalism
New Journalism
New Journalism was a style of 1960s and 1970s news writing and journalism which used literary techniques deemed unconventional at the time. The term was codified with its current meaning by Tom Wolfe in a 1973 collection of journalism articles he published as The New Journalism, which included...
" to the newspapers he acquired in the 1880s and became a leading national figure in the Democratic party
Democratic Party (United States)
The Democratic Party is one of two major contemporary political parties in the United States, along with the Republican Party. The party's socially liberal and progressive platform is largely considered center-left in the U.S. political spectrum. The party has the lengthiest record of continuous...
. He crusaded against big business and corruption. In the 1890s the fierce competition between his World and William Randolph Hearst
William Randolph Hearst
William Randolph Hearst was an American business magnate and leading newspaper publisher. Hearst entered the publishing business in 1887, after taking control of The San Francisco Examiner from his father...
's New York Journal introduced yellow journalism
Yellow journalism
Yellow journalism or the yellow press is a type of journalism that presents little or no legitimate well-researched news and instead uses eye-catching headlines to sell more newspapers. Techniques may include exaggerations of news events, scandal-mongering, or sensationalism...
and opened the way to mass circulation
Newspaper circulation
A newspaper's circulation is the number of copies it distributes on an average day. Circulation is one of the principal factors used to set advertising rates. Circulation is not always the same as copies sold, often called paid circulation, since some newspapers are distributed without cost to the...
newspapers that depended on advertising
Advertising
Advertising is a form of communication used to persuade an audience to take some action with respect to products, ideas, or services. Most commonly, the desired result is to drive consumer behavior with respect to a commercial offering, although political and ideological advertising is also common...
revenue
Revenue
In business, revenue is income that a company receives from its normal business activities, usually from the sale of goods and services to customers. In many countries, such as the United Kingdom, revenue is referred to as turnover....
and appealed to the reader with multiple forms of news, entertainment and advertising.

Today he is best known for posthumously establishing the Pulitzer Prize
Pulitzer Prize
The Pulitzer Prize is a U.S. award for achievements in newspaper and online journalism, literature and musical composition. It was established by American publisher Joseph Pulitzer and is administered by Columbia University in New York City...
s.
The first Pulitzers emigrated from Moravia
Moravia
Moravia is a historical region in Central Europe in the east of the Czech Republic, and one of the former Czech lands, together with Bohemia and Silesia. It takes its name from the Morava River which rises in the northwest of the region...
to Hungary
Hungary
Hungary , officially the Republic of Hungary , is a landlocked country in Central Europe. It is situated in the Carpathian Basin and is bordered by Slovakia to the north, Ukraine and Romania to the east, Serbia and Croatia to the south, Slovenia to the southwest and Austria to the west. The...
at the end of the 18th century.