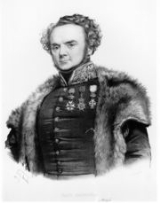 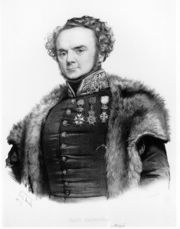 Joseph Paul Gaimard was a French
France
The French Republic , The French Republic , The French Republic , (commonly known as France , is a unitary semi-presidential republic in Western Europe with several overseas territories and islands located on other continents and in the Indian, Pacific, and Atlantic oceans. Metropolitan France...
naval surgeon and naturalist
Natural history
Natural history is the scientific research of plants or animals, leaning more towards observational rather than experimental methods of study, and encompasses more research published in magazines than in academic journals. Grouped among the natural sciences, natural history is the systematic study...
.

Along with Jean René Constant Quoy
Jean René Constant Quoy
Jean René Constant Quoy was a French zoologist.Along with Joseph Paul Gaimard he served as naturalist aboard La Coquille under Louis Isidore Duperrey during its circumnavigation of the globe , and the Astrolabe under the command of Jules Dumont d'Urville...
he served as naturalist on the ships L'Uranie under Louis de Freycinet
Louis de Freycinet
Louis Claude de Saulces de Freycinet was a French navigator. He circumnavigated the earth, and was one of the first to produce a comprehensive map of the coastline of Australia.-Biography:...
1817-1820, and L'Astrolabe under Jules Dumont d'Urville
Jules Dumont d'Urville
Jules Sébastien César Dumont d'Urville was a French explorer, naval officer and rear admiral, who explored the south and western Pacific, Australia, New Zealand and Antarctica.-Childhood:Dumont was born at Condé-sur-Noireau...
1826-1829. During this voyage they discovered the now extinct giant skink of Tonga Tachygia
Tachygia
Tachygia is an extinct genus of skink from Tonga. The type and only known species is T. microlepis.-References:** World Conservation Monitoring Centre 1996. . Downloaded on 20 July 2007....
microlepis.

He was the scientific leader on La Recherche (1835–1836) during its expedition to the Arctic Sea. In 1835 Gaimard visited Iceland
Iceland
Iceland , described as the Republic of Iceland, is a Nordic and European island country in the North Atlantic Ocean, on the Mid-Atlantic Ridge. Iceland also refers to the main island of the country, which contains almost all the population and almost all the land area. The country has a population...
, returning again the following summer as the head of a scientific mission funded by the French government. Out of this trip came the 9 volume Voyage en Islande et au Groënland (8 text volumes, one of geographical illustrations), which was said at the time to be the definitive study of the islands. In 1838, he was the leader of a scientific expedition to Spitsbergen
Spitsbergen
Spitsbergen is the largest and only permanently populated island of the Svalbard archipelago in Norway. Constituting the western-most bulk of the archipelago, it borders the Arctic Ocean, the Norwegian Sea and the Greenland Sea...
.

His numerous scientific publications include a major work on the results of each of these four great expeditions.

At least two species have been named in his honor: