Encyclopedia
Josep Maria Jujol Gibert (ʒuˈzɛb məˈɾi.ə ʒuˈʒɔɫ; September 16, 1879 – May 1, 1949) was a Catalan
Catalonia
Catalonia is an autonomous community in northeastern Spain, with the official status of a "nationality" of Spain. Catalonia comprises four provinces: Barcelona, Girona, Lleida, and Tarragona. Its capital and largest city is Barcelona. Catalonia covers an area of 32,114 km² and has an...
architect
Architect
An architect is a person trained in the planning, design and oversight of the construction of buildings. To practice architecture means to offer or render services in connection with the design and construction of a building, or group of buildings and the space within the site surrounding the...
.

Jujol's wide field of activity ranged from furniture designs and painting, to architecture
Architecture
Architecture is both the process and product of planning, designing and construction. Architectural works, in the material form of buildings, are often perceived as cultural and political symbols and as works of art...
. He worked with Antoni Gaudí
Antoni Gaudí
Antoni Gaudí i Cornet was a Spanish Catalan architect and figurehead of Catalan Modernism. Gaudí's works reflect his highly individual and distinctive style and are largely concentrated in the Catalan capital of Barcelona, notably his magnum opus, the Sagrada Família.Much of Gaudí's work was...
on many of his most famous works.

Josep Maria Jujol was born in Tarragona
Tarragona
Tarragona is a city located in the south of Catalonia on the north-east of Spain, by the Mediterranean. It is the capital of the Spanish province of the same name and the capital of the Catalan comarca Tarragonès. In the medieval and modern times it was the capital of the Vegueria of Tarragona...
where he lived until age 9. He was the son of
Andreu Jujol, a school director, and of Teresa Giberti i Vives. He was born on the top floor of the public school, Sant Joan, where his father worked. He began to draw at an early age, and always had an admiration for nature. According to his biography, he would roam the hills of Terragona and its Roman ruins. They lived at the school for nine years before his father was transferred in 1888 to Carrer Zurbano in Gràcia
Gràcia
Gràcia is a district of the city of Barcelona, Catalonia, Spain. It comprises the neighborhoods of Vila de Gràcia, Vallcarca i els Penitents, El Coll, La Salut and Camp d'en Grassot i Gràcia Nova. Gràcia is bordered by the districts of Eixample to the south, Sarrià-Sant Gervasi to the west and...
, which is now integrated into the City of Barcelona
Barcelona
Barcelona is the second largest city in Spain after Madrid, and the capital of Catalonia, with a population of 1,621,537 within its administrative limits on a land area of...
. He was transferred once again in 1893 to the City of Barcelona. There Jujol began to walk the medieval district and developed an admiration for the gothic architecture
Gothic architecture
Gothic architecture is a style of architecture that flourished during the high and late medieval period. It evolved from Romanesque architecture and was succeeded by Renaissance architecture....
and began to draft the buildings. The family moved to the Gran Via where he experienced modern buildings. In 1901, he was accepted in the Architectural program. 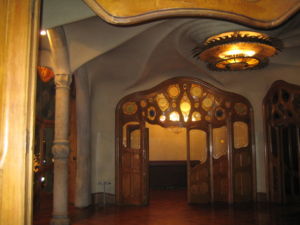 While attending school, he first worked with Antoni Maria Gallissa i Soque (Don Antoni), whom he admired as a person and an architect. His first project was a commission for Don Antoni to decorate the Carrer Fenen for the Festes de la Merce. Jujol had to create the metal frames and stained glass
Stained glass
The term stained glass can refer to coloured glass as a material or to works produced from it. Throughout its thousand-year history, the term has been applied almost exclusively to the windows of churches and other significant buildings...
windows. He continued to work for Don Antoni until 1903. He then began to work in the studio of Josep Font i Guma. Where he collaborated with him on the Trinity altar in the Basilica de Santa Maria del Mar. In his spare time he completed plans for an amusement park
Amusement park
thumb|Cinderella Castle in [[Magic Kingdom]], [[Disney World]]Amusement and theme parks are terms for a group of entertainment attractions and rides and other events in a location for the enjoyment of large numbers of people...
that was to emulate the solar system. The plan was never revived.

In 1906 he received his certificate as an architect and was able to work on his own. One of his first projects was to decorate Don Antoni's entrance stairway with his famous trademark of graffiti.

Jujol became acquainted with Antoni Gaudi
Antoni Gaudí
Antoni Gaudí i Cornet was a Spanish Catalan architect and figurehead of Catalan Modernism. Gaudí's works reflect his highly individual and distinctive style and are largely concentrated in the Catalan capital of Barcelona, notably his magnum opus, the Sagrada Família.Much of Gaudí's work was...
through their mutual friend, Dr. Santalo. Gaudi soon worked in partnership with Jujol. Their first project together was Casa Batllo
Casa Batlló
Casa Batlló is a building restored by Antoni Gaudí and Josep Maria Jujol, built in the year 1877 and remodelled in the years 1904–1906; located at 43, Passeig de Gràcia , part of the Illa de la Discòrdia in the Eixample district of Barcelona, Spain...
. It is speculated in Jujol's biography that he had a great influence on Gaudi's use of colouration and shapes. However, it is not for certain. Gaudi had great respect towards Jujol's views and entrusted him with his projects for many years.