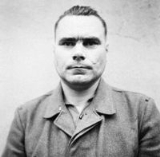 Encyclopedia
Josef Kramer was the Commandant
Commandant
Commandant is a senior title often given to the officer in charge of a large training establishment or academy. This usage is common in anglophone nations...
of the Bergen-Belsen
Bergen-Belsen concentration camp
Bergen-Belsen was a Nazi concentration camp in Lower Saxony in northwestern Germany, southwest of the town of Bergen near Celle...
concentration camp. Dubbed "The Beast of Belsen" by camp inmates; he was a notorious Nazi war criminal, directly responsible for the deaths of thousands of people. He was convicted of war crimes and hanged in Hamelin
Hamelin
Hamelin is a town on the river Weser in Lower Saxony, Germany. It is the capital of the district of Hamelin-Pyrmont and has a population of 58,696 ....
prison by noted British executioner Albert Pierrepoint
Albert Pierrepoint
Albert Pierrepoint is the most famous member of the family which provided three of the United Kingdom's official hangmen in the first half of the 20th century...
after World War II
World War II
World War II, or the Second World War , was a global conflict lasting from 1939 to 1945, involving most of the world's nations—including all of the great powers—eventually forming two opposing military alliances: the Allies and the Axis...
.

Kramer was born in Munich
Munich
Munich The city's motto is "" . Before 2006, it was "Weltstadt mit Herz" . Its native name, , is derived from the Old High German Munichen, meaning "by the monks' place". The city's name derives from the monks of the Benedictine order who founded the city; hence the monk depicted on the city's coat...
and joined the Nazi Party
National Socialist German Workers Party
The National Socialist German Workers' Party , commonly known in English as the Nazi Party, was a political party in Germany between 1920 and 1945. Its predecessor, the German Workers' Party , existed from 1919 to 1920...
in 1931 and the SS
Schutzstaffel
The Schutzstaffel |Sig runes]]) was a major paramilitary organization under Adolf Hitler and the Nazi Party. Built upon the Nazi ideology, the SS under Heinrich Himmler's command was responsible for many of the crimes against humanity during World War II...
in 1932. His SS training led him into work as a prison guard and, after the outbreak of war, as a concentration camp guard.

In 1940, he accompanied Rudolf Höß to inspect Auschwitz as a possible site for a new synthetic coal oil and rubber plant, which was a vital industry in Germany
Germany
Germany , officially the Federal Republic of Germany , is a federal parliamentary republic in Europe. The country consists of 16 states while the capital and largest city is Berlin. Germany covers an area of 357,021 km2 and has a largely temperate seasonal climate...
given its shortage of oil.

Kramer served as commandant of Natzweiler-Struthof
Natzweiler-Struthof
Natzweiler-Struthof was a German concentration camp located in the Vosges Mountains close to the Alsatian village of Natzwiller in France, and the town of Schirmeck, about 50 km south west from the city of Strasbourg....
, the only concentration camp established by the Nazis on present-day French
France
The French Republic , The French Republic , The French Republic , (commonly known as France , is a unitary semi-presidential republic in Western Europe with several overseas territories and islands located on other continents and in the Indian, Pacific, and Atlantic oceans. Metropolitan France...
territory, though there were French-run transit camps such as the one at Drancy. At the time, the Alsace-Lorraine
Alsace-Lorraine
The Imperial Territory of Alsace-Lorraine was a territory created by the German Empire in 1871 after it annexed most of Alsace and the Moselle region of Lorraine following its victory in the Franco-Prussian War. The Alsatian part lay in the Rhine Valley on the west bank of the Rhine River and east...
area in which it was established had been annexed by Nazi Germany.

As commandant at Natzweiler-Stuthof, Kramer personally carried out the gassings of 80 Jewish men and women, part of a group of 87 selected at Auschwitz to become anatomical specimens in a proposed Jewish skeleton collection
Jewish skeleton collection
The Jewish skeleton collection was an attempt by the Nazis to create an anthropological display to showcase the alleged racial inferiority of the "Jewish race" and to emphasize the Jews status as untermenschen as opposed to the German race which the Nazis considered to be Aryan ubermenschen...
to be housed at the Anatomy Institute at the Reich University of Strasbourg
Reichsuniversität Straßburg
The Reichsuniversität Straßburg was founded 1941 by the National Socialists in Alsace while the regular University of Strasbourg had moved to Clermont-Ferrand since 1940. The purpose was to create a continuity to the German character of the German Imperial University of Strasbourg, that had been...
under the direction of August Hirt
August Hirt
August Hirt , an SS-Hauptsturmführer , served as a chairman at the Reich University in Strasbourg during World War II....
.

At Auschwitz, Kramer soon became notorious among his subordinates as a harsh taskmaster. One of the defendants at the Frankfurt Trial, Dr. Franz Lucas
Franz Lucas
Dr. Franz Bernhard Lucas was a German concentration camp doctor and SS Obersturmführer who served at Auschwitz concentration camp during the same period of time as Josef Mengele...
, testified that he tried to avoid assignments given him by Kramer by pleading stomach and intestinal disorders. When Dr. Lucas saw that his name had been added to the list of selecting physicians for a large group of inmates transferred from Hungary, he objected strenuously. Kramer reacted sharply: "I know you are being investigated for favouring prisoners. I am now ordering you to go to the ramp, and if you fail to obey an order, I shall have you arrested on the spot".

In December 1944, Kramer was transferred from Birkenau
Auschwitz concentration camp
Concentration camp Auschwitz was a network of Nazi concentration and extermination camps built and operated by the Third Reich in Polish areas annexed by Nazi Germany during World War II...
to Bergen Belsen, near the village of Bergen. Belsen had originally served as a temporary camp for those leaving Germany, but during the war had been expanded to serve as a convalescent depot for the ill and displaced people from across north-west Europe. Although it had no gas chambers, Kramer's rule was so harsh that he became known as the 'Beast of Belsen'. As Germany collapsed administration of the camp broke down, but Kramer remained devoted to bureaucracy. On March 1, 1945, he filed a report asking for help and resources, stating that of the 42,000 inmates in his camp, 250-300 died each day from typhus. On March 19, the number of inmates rose to 60,000 as the Germans continued to evacuate camps that were soon to be liberated by the Allies. As late as the week of April 13, some 28,000 additional prisoners were brought in.

With the collapse of administration and many guards fleeing to escape retribution, roll calls were stopped, and the inmates were left to their own devices. Corpses rotted everywhere, and rat
Rat
Rats are various medium-sized, long-tailed rodents of the superfamily Muroidea. "True rats" are members of the genus Rattus, the most important of which to humans are the black rat, Rattus rattus, and the brown rat, Rattus norvegicus...
s attacked the living too weak to fight them off. Kramer remained even when the British arrived to liberate the camp. He remained indifferent and callous and took them on a tour of the camp to inspect the 'scenes'. Piles of corpses were lying all over the camp, mass graves were filled in, and the huts were filled with prisoners in every stage of emaciation and disease.

Josef Kramer was imprisoned at the Hamelin jail. Josef Kramer and 44 other camp staff were tried in the Belsen Trial
Belsen Trial
The Belsen Trial was one of several trials that the Allied occupation forces conducted against former officials and functionaries of Nazi Germany after the end of World War II...
by a British military court at Lüneburg
Lüneburg
Lüneburg is a town in the German state of Lower Saxony. It is located about southeast of fellow Hanseatic city Hamburg. It is part of the Hamburg Metropolitan Region, and one of Hamburg's inner suburbs...
. The trial lasted several weeks from September to November 1945. He was sentenced to death on November 17, 1945, and hanged at Hamelin jail by Albert Pierrepoint
Albert Pierrepoint
Albert Pierrepoint is the most famous member of the family which provided three of the United Kingdom's official hangmen in the first half of the 20th century...
on December 13, 1945.