Encyclopedia
John Philip Holland (29 February 184012 August 1914) was an Irish
Irish people
The Irish people are an ethnic group who originate in Ireland, an island in northwestern Europe. Ireland has been populated for around 9,000 years , with the Irish people's earliest ancestors recorded having legends of being descended from groups such as the Nemedians, Fomorians, Fir Bolg, Tuatha...
engineer
Engineer
An engineer is a professional practitioner of engineering, concerned with applying scientific knowledge, mathematics and ingenuity to develop solutions for technical problems. Engineers design materials, structures, machines and systems while considering the limitations imposed by practicality,...
who developed the first submarine
Submarine
A submarine is a watercraft capable of independent operation below the surface of the water. It differs from a submersible, which has more limited underwater capability...
to be formally commissioned by the U.S. Navy
United States Navy
The United States Navy is the naval warfare service branch of the United States Armed Forces and one of the seven uniformed services of the United States. The U.S. Navy is the largest in the world; its battle fleet tonnage is greater than that of the next 13 largest navies combined. The U.S...
, and the first Royal Navy
Royal Navy
The Royal Navy is the naval warfare service branch of the British Armed Forces. Founded in the 16th century, it is the oldest service branch and is known as the Senior Service...
submarine, the Holland 1
Holland 1
Holland 1 was the first submarine commissioned by the Royal Navy, the first in a six-boat batch of the Holland-class submarine. She was lost in 1913 while under tow to the scrapyard following decommissioning...
.

He was one of four brothers who may have been born in Liscannor
Liscannor
Liscannor is a coastal village in County Clare, Ireland. Lying on the west coast of Ireland, on Liscannor Bay, the village is located on the R478 road between Lahinch, to the east, and Doolin, to the north. The Cliffs of Moher are about west of the village...
, County Clare
County Clare
-History:There was a Neolithic civilisation in the Clare area — the name of the peoples is unknown, but the Prehistoric peoples left evidence behind in the form of ancient dolmen; single-chamber megalithic tombs, usually consisting of three or more upright stones...
, Ireland
Ireland
Ireland is an island to the northwest of continental Europe. It is the third-largest island in Europe and the twentieth-largest island on Earth...
to an Irish speaking
Irish language
Irish , also known as Irish Gaelic, is a Goidelic language of the Indo-European language family, originating in Ireland and historically spoken by the Irish people. Irish is now spoken as a first language by a minority of Irish people, as well as being a second language of a larger proportion of...
mother, Máire Ní Scannláin, and John Holland, and learned English properly only when he attended the local English-speaking National School system and, from 1858, in the Christian Brothers
Congregation of Christian Brothers
The Congregation of Christian Brothers is a worldwide religious community within the Catholic Church, founded by Blessed Edmund Rice. The Christian Brothers, as they are commonly known, chiefly work for the evangelisation and education of youth, but are involved in many ministries, especially with...
in Ennistymon.
Holland joined the Irish Christian Brothers in Limerick
Limerick
Limerick is the third largest city in the Republic of Ireland, and the principal city of County Limerick and Ireland's Mid-West Region. It is the fifth most populous city in all of Ireland. When taking the extra-municipal suburbs into account, Limerick is the third largest conurbation in the...
and taught in Limerick and many other centers in the country including North Monastery CBS
The North Monastery
The North Monastery is a collection of primary, secondary and a Gaelcholáiste schools located at Our Lady's Mount, Cork City, Republic of Ireland.-History:...
in Cork City. Due to ill health, he left the Christian Brothers in 1873.

Holland emigrated to the United States
United States
The United States of America is a federal constitutional republic comprising fifty states and a federal district...
in 1873. Initially working for an engineering firm, he returned to teaching again for a further six years in St. John’s Catholic School in Paterson, New Jersey
Paterson, New Jersey
Paterson is a city serving as the county seat of Passaic County, New Jersey, United States. As of the 2010 United States Census, its population was 146,199, rendering it New Jersey's third largest city and one of the largest cities in the New York City Metropolitan Area, despite a decrease of 3,023...
. In 1875, his first submarine designs were submitted for consideration by the U.S. Navy, but turned down as unworkable. The Fenians, however, continued to fund Holland's research and development expenses at a level that allowed him to resign from his teaching post. In 1881, Fenian Ram
Fenian Ram
Fenian Ram is a submarine designed by John Philip Holland for use by the Fenian Brotherhood, American counterpart to the Irish Republican Brotherhood, against the British...
was launched, but soon after, Holland and the Fenians parted company angrily, primarily due to issues of payment within the Fenian organization, and between the Fenians and Holland. The submarine is now preserved at Paterson Museum
Paterson Museum
Paterson Museum is a museum in Paterson, in Passaic County, New Jersey, in the United States. Founded in 1925, it is owned and run by the city of Paterson and its mission is to preserve and display the industrial history of Paterson...
, New Jersey. 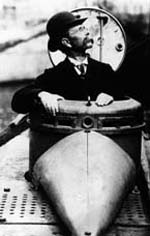 Holland continued to improve his designs and worked on several experimental boats, prior to his successful efforts with a privately built type, launched on 17 May 1897. This was the first submarine having power to run submerged for any considerable distance, and the first to combine electric motors for submerged travel and gasoline engines for use on the surface. She was purchased by the U.S. Navy, on 11 April 1900, after rigorous tests and was commissioned on 12 October 1900 as USS Holland
USS Holland (SS-1)
USS Holland was the United States Navy's first commissioned submarine, named for her Irish-American inventor, John Philip Holland, although not the first submarine of the US Navy, which was the 1862...
. Six more of her type were ordered and built at the Crescent Shipyard
Crescent Shipyard
Crescent Shipyard, located in Elizabeth, New Jersey, built a number of ships for the United States Navy and allied nations as well during their production run, which lasted about ten years while under the Crescent name and banner. Production of these ships began before the Spanish-American war and...
in Elizabeth, New Jersey. The company that emerged from under these developments was called The Electric Boat Company, founded on 7 February 1899. Isaac Leopold Rice became the company's first President with Elihu B. Frost
Elihu B. Frost
Elihu Brintnal Frost was an American lawyer with an early involvement in the submarine industry.Born in Peekskill, New York, Frost was the son of lawyer Calvin Frost and Mary Antoinette Oppie Frost. He attended Peekskill Military Academy and graduated from Yale University in 1883, where he was a...
acting as vice president and chief financial officer
Chief financial officer
The chief financial officer or Chief financial and operating officer is a corporate officer primarily responsible for managing the financial risks of the corporation. This officer is also responsible for financial planning and record-keeping, as well as financial reporting to higher management...
.

The USS Holland design was also adopted by others, including the Royal Navy
Royal Navy
The Royal Navy is the naval warfare service branch of the British Armed Forces. Founded in the 16th century, it is the oldest service branch and is known as the Senior Service...
in developing the . The Imperial Japanese Navy
Imperial Japanese Navy
The Imperial Japanese Navy was the navy of the Empire of Japan from 1869 until 1947, when it was dissolved following Japan's constitutional renunciation of the use of force as a means of settling international disputes...
employed a modified version of the basic design for their first five submarines, although these submarines were at least 10 feet longer at about 63 feet. These submarines were also developed at the Fore River Ship and Engine Company in Quincy, MA.

After spending 57 of his 74 years working with submersibles, John Philip Holland died on 12 August 1914 in Newark, New Jersey
Newark, New Jersey
Newark is the largest city in the American state of New Jersey, and the seat of Essex County. As of the 2010 United States Census, Newark had a population of 277,140, maintaining its status as the largest municipality in New Jersey. It is the 68th largest city in the U.S...
. Holland is interred at the Holy Sepulchre Cemetery in Totowa
Totowa
Totowa may refer to the following in the U.S. state of New Jersey:*Totowa, New Jersey, a borough in Passaic County**Totowa Borough Public Schools, a school district in the above borough*Totowa section, a neighborhood of Paterson...
, New Jersey
New Jersey
New Jersey is a state in the Northeastern and Middle Atlantic regions of the United States. , its population was 8,791,894. It is bordered on the north and east by the state of New York, on the southeast and south by the Atlantic Ocean, on the west by Pennsylvania and on the southwest by Delaware...
.