In addition to banking, Krubsack was a prominent naturalist who farmed, made cheese, and landscaped his property long before these were common practice. His house was the first in his region to have running water. He also was skilled at piecing together furniture from found branches. He’d scour the local river flats with a yardstick and a saw, looking for just the right shaped piece of blue beech, a hardwood tree with a smooth, wavy bark and a beautiful blue color when varnished. John took his youngest son, Hugo, on these weekend wood-hunting excursions, and it was during one of his trips that the idea first came to him to grow his own chair.

In a letter sent to his nephew Dennis in 1975, Hugo described his father’s announcement of the living chair: 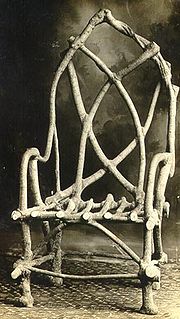 Krubsack explains the process in which he grew the chair in detail:

The chair, eventually dubbed the “Chair That Grew,” had its first big public showing in a natural history exhibit at the 1915 World’s Fair, the Panama-Pacific International Exposition, held that year in San Francisco, California.
Hugo assisted his father in all aspects of the living chair project and went on to promote it in many ways, including contacting Robert Ripley, who ran it in his “Believe It or Not” column and later filmed John standing beside the chair explaining all about it. The film ran in the weekly newsreels of the time in theaters across the US.
The Lloyd Mfg. Co. at the Chicago Furniture Mart subsequently showed the chair during a large trade show for furniture manufacturers. The “Chair That Grew” was displayed on a golden pedestal at the entrance.
Krubsack’s chair garnered many offers (one was $5,000) from would-be buyers over the years, but John, and later Hugo, turned them all down. Hugo had no heirs and simply could not bear to see it in the hands of others. He maintained possession of it until he let his nephew Gerhard A. Krubsack buy it for a token amount to use in advertising his furniture business, Noritage Furniture of Embarrass, Wisconsin.

In 1988 the chair was summoned to make another appearance, this time to be sat upon by an actor in the costume of Mickey Mouse
Mickey Mouse
Mickey Mouse is a cartoon character created in 1928 by Walt Disney and Ub Iwerks at The Walt Disney Studio. Mickey is an anthropomorphic black mouse and typically wears red shorts, large yellow shoes, and white gloves...
, at Disney World in Orlando, Florida, on the occasion of the character's 60th birthday. Currently the chair sits inside a special Plexiglas case at the entrance of Noritage Furniture, the furniture manufacturing business now owned by John Krubsack’s descendants, Steve and Dennis Krubsack.