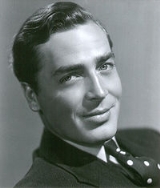 Encyclopedia
John Howard was an American
United States
The United States of America is a federal constitutional republic comprising fifty states and a federal district...
actor noted for his work in film and television.

Born John R. Cox, Jr. in Cleveland, Ohio
Cleveland, Ohio
Cleveland is a city in the U.S. state of Ohio and is the county seat of Cuyahoga County, the most populous county in the state. The city is located in northeastern Ohio on the southern shore of Lake Erie, approximately west of the Pennsylvania border...
, he was a Phi Beta Kappa graduate of what is now Case Western Reserve University
Case Western Reserve University
Case Western Reserve University is a private research university located in Cleveland, Ohio, USA...
. At college he discovered a love for the theater, and took part in student productions. The good-looking and personable young Howard soon became a contract player for Paramount
Paramount Pictures
Paramount Pictures Corporation is an American film production and distribution company, located at 5555 Melrose Avenue in Hollywood. Founded in 1912 and currently owned by media conglomerate Viacom, it is America's oldest existing film studio; it is also the last major film studio still...
, working in a dozen pictures before getting his first memorable role as Ronald Colman
Ronald Colman
Ronald Charles Colman was an English actor.-Early years:He was born in Richmond, Surrey, England, the second son and fourth child of Charles Colman and his wife Marjory Read Fraser. His siblings included Eric, Edith, and Marjorie. He was educated at boarding school in Littlehampton, where he...
's younger brother in Lost Horizon. He soon took over for Colman in the popular Bulldog Drummond
Bulldog Drummond
Bulldog Drummond is a British fictional character, created by "Sapper", a pseudonym of Herman Cyril McNeile , and the hero of a series of novels published from 1920 to 1954.- Drummond :...
series of films, starring in seven of the features (1937–39), and maintaining the film version of the detective as far more sophisticated than the original print character. Howard's next noteworthy assignment was as Katharine Hepburn
Katharine Hepburn
Katharine Houghton Hepburn was an American actress of film, stage, and television. In a career that spanned 62 years as a leading lady, she was best known for playing strong-willed, sophisticated women in both dramas and comedies...
's fiancé in The Philadelphia Story (1940).

He served in the Navy during World War II
World War II
World War II, or the Second World War , was a global conflict lasting from 1939 to 1945, involving most of the world's nations—including all of the great powers—eventually forming two opposing military alliances: the Allies and the Axis...
, eventually as Executive Officer aboard a minesweeper
Minesweeper (ship)
A minesweeper is a small naval warship designed to counter the threat posed by naval mines. Minesweepers generally detect then neutralize mines in advance of other naval operations.-History:...
. When his vessel struck a mine off the French coast in August, 1944, killing the captain and severely damaging the ship, Howard took over command and fought valiantly to save his ship and crew, even jumping into the sea to save several wounded sailors. For his gallantry he was awarded both the US Navy Cross
Navy Cross
The Navy Cross is the highest decoration that may be bestowed by the Department of the Navy and the second highest decoration given for valor. It is normally only awarded to members of the United States Navy, United States Marine Corps and United States Coast Guard, but can be awarded to all...
and the French Croix de Guerre
Croix de guerre
The Croix de guerre is a military decoration of France. It was first created in 1915 and consists of a square-cross medal on two crossed swords, hanging from a ribbon with various degree pins. The decoration was awarded during World War I, again in World War II, and in other conflicts...
.

Upon his return to Hollywood, Howard was given the lead in lesser projects, but limited to supporting roles in feature pictures. Even his solid performance as Laraine Day
Laraine Day
Laraine Day was an American actress and a former MGM contract star.-Career:Born La Raine Johnson in Roosevelt, Utah, to an affluent Mormon family, she later moved to California where she began her acting career with the Long Beach Players...
's husband in The High and the Mighty
The High and the Mighty (film)
The High and the Mighty is a 1954 American "disaster" film directed by William A. Wellman and written by Ernest K. Gann who also wrote the novel on which his screenplay was based. The film's cast was headlined by John Wayne, who was also the project's co-producer...
(1954) did not generate any opportunities to break the pattern.

Howard wasn't familiar or comfortable with the new system of agents, contrary to his acting upbringing of being owned by Paramount studios. A shy and modest man, Howard didn't have the assertiveness expected in an audition, and wasn't comfortable "selling himself" to a film. Between his shyness and not having an assertive agent, Howard's acting career tapered out.

Howard made his Broadway
Broadway theatre
Broadway theatre, commonly called simply Broadway, refers to theatrical performances presented in one of the 40 professional theatres with 500 or more seats located in the Theatre District centered along Broadway, and in Lincoln Center, in Manhattan in New York City...
debut in Hazel Flagg
Hazel Flagg
Hazel Flagg is a musical with a book by Ben Hecht, lyrics by Bob Hilliard, and music by Jule Styne. The musical is based on the 1937 screwball comedy film Nothing Sacred...
in 1953, where he met his wife, ballerina/actress Eva Ralf.
He found a great friendship with Fred MacMurray
Fred MacMurray
Frederick Martin "Fred" MacMurray was an American actor who appeared in more than 100 movies and a successful television series during a career that spanned nearly a half-century, from 1930 to the 1970s....
, star of My Three Sons
My Three Sons
My Three Sons is an American situation comedy. The series ran from 1960 to 1965 on ABC, and moved to CBS until its end on August 24, 1972. My Three Sons chronicles the life of a widower and aeronautical engineer named Steven Douglas , raising his three sons.The series was a cornerstone of the CBS...
, and was a regular guest star on the show, playing Fred MacMurray's boss. He became one of the first screen actors to commit to working in the new field of television and continued to make occasional film appearances until the mid-1970s, then gradually moved into academia. He taught English at Highland Hall Waldorf School
Highland Hall Waldorf School
Highland Hall Waldorf School is a private school in Northridge, California with a curriculum based on the teachings of Rudolf Steiner and Waldorf Education. Offering classes from grades Pre-K through 12, it is recognized the oldest Waldorf school on the West Coast...
for over twenty years, helping to start the high school program at Highland Hall.

He died in 1995 of heart failure, aged 81, in Santa Rosa, California
Santa Rosa, California
Santa Rosa is the county seat of Sonoma County, California, United States. The 2010 census reported a population of 167,815. Santa Rosa is the largest city in California's Wine Country and fifth largest city in the San Francisco Bay Area, after San Jose, San Francisco, Oakland, and Fremont and 26th...
, survived by his wife and their four children. He was awarded a star on the Hollywood Walk of Fame.