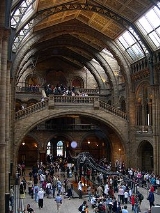 Overview
The Natural History Museum is one of three large museum
Museum
A museum is an institution that cares for a collection of artifacts and other objects of scientific, artistic, cultural, or historical importance and makes them available for public viewing through exhibits that may be permanent or temporary. Most large museums are located in major cities...
s on Exhibition Road
Exhibition Road
Exhibition Road is a street in South Kensington, London, forming a semi-border between the Royal Borough of Kensington and Chelsea and the City of Westminster...
, South Kensington
South Kensington
South Kensington is a district in the Royal Borough of Kensington and Chelsea in London. It is a built-up area located 2.4 miles west south-west of Charing Cross....
, London
London
London is the capital city of :England and the :United Kingdom, the largest metropolitan area in the United Kingdom, and the largest urban zone in the European Union by most measures. Located on the River Thames, London has been a major settlement for two millennia, its history going back to its...
, England
England
England is a country that is part of the United Kingdom. It shares land borders with Scotland to the north and Wales to the west; the Irish Sea is to the north west, the Celtic Sea to the south west, with the North Sea to the east and the English Channel to the south separating it from continental...
(the others are the Science Museum
Science Museum (London)
The Science Museum is one of the three major museums on Exhibition Road, South Kensington, London in the Royal Borough of Kensington and Chelsea. It is part of the National Museum of Science and Industry. The museum is a major London tourist attraction....
, and the Victoria and Albert Museum
Victoria and Albert Museum
The Victoria and Albert Museum , set in the Brompton district of The Royal Borough of Kensington and Chelsea, London, England, is the world's largest museum of decorative arts and design, housing a permanent collection of over 4.5 million objects...
). Its main frontage is on Cromwell Road
Cromwell Road
Cromwell Road is a major road in the Royal Borough of Kensington and Chelsea, London, and is designated part of the A4. It was created in the 19th century and is named after Oliver Cromwell....
. The museum is an exempt charity
Exempt charity
An exempt charity is an institution established in England and Wales for charitable purposes which is exempt from registration with, and oversight by, the Charity Commission....
, and a non-departmental public body
Non-departmental public body
In the United Kingdom, a non-departmental public body —often referred to as a quango—is a classification applied by the Cabinet Office, Treasury, Scottish Government and Northern Ireland Executive to certain types of public bodies...
sponsored by the Department for Culture, Media and Sport
Department for Culture, Media and Sport
The Department for Culture, Media and Sport is a department of the United Kingdom government, with responsibility for culture and sport in England, and some aspects of the media throughout the whole UK, such as broadcasting and internet....
.

The museum is home to life and earth science specimens comprising some 70 million items within five main collections: Botany
Botany
Botany, plant science, or plant biology is a branch of biology that involves the scientific study of plant life. Traditionally, botany also included the study of fungi, algae and viruses...
, Entomology
Entomology
Entomology is the scientific study of insects, a branch of arthropodology...
, Mineralogy
Mineralogy
Mineralogy is the study of chemistry, crystal structure, and physical properties of minerals. Specific studies within mineralogy include the processes of mineral origin and formation, classification of minerals, their geographical distribution, as well as their utilization.-History:Early writing...
, Palaeontology and Zoology
Zoology
Zoology |zoölogy]]), is the branch of biology that relates to the animal kingdom, including the structure, embryology, evolution, classification, habits, and distribution of all animals, both living and extinct...
. The museum is a world-renowned centre of research, specialising in taxonomy
Taxonomy
Taxonomy is the science of identifying and naming species, and arranging them into a classification. The field of taxonomy, sometimes referred to as "biological taxonomy", revolves around the description and use of taxonomic units, known as taxa...
, identification and conservation.

Which one is better?
More
x