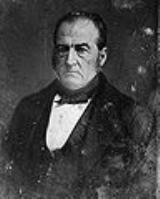 Bell was born in Mill Creek, a hamlet near Nashville, Tennessee
Nashville, Tennessee
Nashville is the capital of the U.S. state of Tennessee and the county seat of Davidson County. It is located on the Cumberland River in Davidson County, in the north-central part of the state. The city is a center for the health care, publishing, banking and transportation industries, and is home...
. He was the son of local farmer Samuel Bell and Margaret (Edmiston) Bell. His father was a blacksmith and farmer. He graduated from Cumberland University
Cumberland University
Cumberland University is a private university in Lebanon, Tennessee, United States. It was founded in 1842, though the current campus buildings were constructed between 1892 and 1896.-History:...
in 1814 and studied law. He was admitted to the bar in 1816 and established a prosperous practice in Franklin
Franklin, Tennessee
Franklin is a city within and the county seat of Williamson County, Tennessee, United States. The population was 62,487 as of the 2010 census Franklin is located approximately south of downtown Nashville.-History:...
. Entering politics, he successfully ran for the Tennessee State Senate in 1817. After serving a single term, Bell declined to run for reelection and instead moved to Nashville. He was elected to the 20th Congress
20th United States Congress
-House of Representatives:-Leadership:- Senate :* President: John C. Calhoun * President pro tempore: Samuel Smith - House of Representatives :* Speaker: Andrew Stevenson -Members:This list is arranged by chamber, then by state...
in 1826, defeating Felix Grundy
Felix Grundy
Felix Grundy was a U.S. Congressman and U.S. Senator from Tennessee who also served as the 13th Attorney General of the United States.-Biography:...
, who had the support of presidential candidate Andrew Jackson. 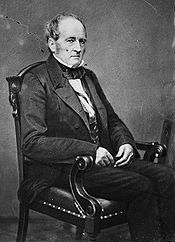 Bell then served briefly as Secretary of War
United States Secretary of War
The Secretary of War was a member of the United States President's Cabinet, beginning with George Washington's administration. A similar position, called either "Secretary at War" or "Secretary of War," was appointed to serve the Congress of the Confederation under the Articles of Confederation...
under William Henry Harrison
William Henry Harrison
William Henry Harrison was the ninth President of the United States , an American military officer and politician, and the first president to die in office. He was 68 years, 23 days old when elected, the oldest president elected until Ronald Reagan in 1980, and last President to be born before the...
and John Tyler
John Tyler
John Tyler was the tenth President of the United States . A native of Virginia, Tyler served as a state legislator, governor, U.S. representative, and U.S. senator before being elected Vice President . He was the first to succeed to the office of President following the death of a predecessor...
in 1841, but then resigned along with the rest of the Cabinet in protest at Tyler's vetoes of Whig bills. He returned to Tennessee and invested in railroads and manufacturing interests, while politically opposing Polk, who won the presidency in 1844 but failed to carry Tennessee through Bell's efforts. In 1847, Bell returned to local politics, being elected to the State House of Representatives. His majority Whig Party selected him for the United States Senate
United States Senate
The United States Senate is the upper house of the bicameral legislature of the United States, and together with the United States House of Representatives comprises the United States Congress. The composition and powers of the Senate are established in Article One of the U.S. Constitution. Each...
, where he served until 1859. A reluctant supporter of the Compromise of 1850
Compromise of 1850
The Compromise of 1850 was a package of five bills, passed in September 1850, which defused a four-year confrontation between the slave states of the South and the free states of the North regarding the status of territories acquired during the Mexican-American War...
, Bell was only one of two Southern senators (the other being Sam Houston
Sam Houston
Samuel Houston, known as Sam Houston , was a 19th-century American statesman, politician, and soldier. He was born in Timber Ridge in the Shenandoah Valley of Virginia, of Scots-Irish descent. Houston became a key figure in the history of Texas and was elected as the first and third President of...
of Texas
Texas
Texas is the second largest U.S. state by both area and population, and the largest state by area in the contiguous United States.The name, based on the Caddo word "Tejas" meaning "friends" or "allies", was applied by the Spanish to the Caddo themselves and to the region of their settlement in...
) to vote against the Kansas-Nebraska Act
Kansas-Nebraska Act
The Kansas–Nebraska Act of 1854 created the territories of Kansas and Nebraska, opening new lands for settlement, and had the effect of repealing the Missouri Compromise of 1820 by allowing settlers in those territories to determine through Popular Sovereignty if they would allow slavery within...
.

Bell married twice, first to Sally Dickinson and then to Jane Yeatman after Dickinson's death.

Abraham Lincoln
Abraham Lincoln
Abraham Lincoln was the 16th President of the United States, serving from March 1861 until his assassination in April 1865. He successfully led his country through a great constitutional, military and moral crisis – the American Civil War – preserving the Union, while ending slavery, and...
of the Republican Party
Republican Party (United States)
The Republican Party is one of the two major contemporary political parties in the United States, along with the Democratic Party. Founded by anti-slavery expansion activists in 1854, it is often called the GOP . The party's platform generally reflects American conservatism in the U.S...
won the United States Presidential election of 1860 in the face of a four-way split of the votes. Bell won 39 electoral votes (13%) and 592,906 popular votes (13% of the total; 39% of Southern popular votes). Lincoln was not on the ballot in most southern states. Bell carried Virginia
Virginia
The Commonwealth of Virginia , is a U.S. state on the Atlantic Coast of the Southern United States. Virginia is nicknamed the "Old Dominion" and sometimes the "Mother of Presidents" after the eight U.S. presidents born there...
, Kentucky
Kentucky
The Commonwealth of Kentucky is a state located in the East Central United States of America. As classified by the United States Census Bureau, Kentucky is a Southern state, more specifically in the East South Central region. Kentucky is one of four U.S. states constituted as a commonwealth...
, and Tennessee
Tennessee
Tennessee is a U.S. state located in the Southeastern United States. It has a population of 6,346,105, making it the nation's 17th-largest state by population, and covers , making it the 36th-largest by total land area...
, largely as a result of the division of the Democratic Party between John C. Breckenridge (representing the South
Southern United States
The Southern United States—commonly referred to as the American South, Dixie, or simply the South—constitutes a large distinctive area in the southeastern and south-central United States...
) and Stephen A. Douglas
Stephen A. Douglas
Stephen Arnold Douglas was an American politician from the western state of Illinois, and was the Northern Democratic Party nominee for President in 1860. He lost to the Republican Party's candidate, Abraham Lincoln, whom he had defeated two years earlier in a Senate contest following a famed...
(representing the North
Northern United States
Northern United States, also sometimes the North, may refer to:* A particular grouping of states or regions of the United States of America. The United States Census Bureau divides some of the northernmost United States into the Midwest Region and the Northeast Region...
), but received less than 3% of the vote in Northern states. Bell ran strongly in Louisiana
Louisiana
Louisiana is a state located in the southern region of the United States of America. Its capital is Baton Rouge and largest city is New Orleans. Louisiana is the only state in the U.S. with political subdivisions termed parishes, which are local governments equivalent to counties...
too, but the state voted for Breckinridge, who enjoyed the support of the influential U.
S. Senator John Slidell
John Slidell
John Slidell was an American politician, lawyer and businessman. A native of New York, Slidell moved to Louisiana as a young man and became a staunch defender of southern rights as a U.S. Representative and Senator...
. Another Louisiana figure, Pierre Soule
Pierre Soulé
Pierre Soulé was a U.S. politician and diplomat from Louisiana during the mid-19th century. He is best known for his role in writing the Ostend Manifesto, which was written in 1854 as part of an attempt to annex Cuba to the United States...
, backed Douglas.

Initially opposed to secession
Secession
Secession is the act of withdrawing from an organization, union, or especially a political entity. Threats of secession also can be a strategy for achieving more limited goals.-Secession theory:...
, he travelled to Washington, D.C.
Washington, D.C.
Washington, D.C., formally the District of Columbia and commonly referred to as Washington, "the District", or simply D.C., is the capital of the United States. On July 16, 1790, the United States Congress approved the creation of a permanent national capital as permitted by the U.S. Constitution....
to meet with President Lincoln. Bell was initially successful in helping hold Tennessee in the Union after states in the Deep South seceded. However, after the secessionist firing on Fort Sumter
Fort Sumter
Fort Sumter is a Third System masonry coastal fortification located in Charleston Harbor, South Carolina. The fort is best known as the site upon which the shots initiating the American Civil War were fired, at the Battle of Fort Sumter.- Construction :...
in South Carolina
South Carolina
South Carolina is a state in the Deep South of the United States that borders Georgia to the south, North Carolina to the north, and the Atlantic Ocean to the east. Originally part of the Province of Carolina, the Province of South Carolina was one of the 13 colonies that declared independence...
and Lincoln's call up of troops in response to this attack, Bell reluctantly accepted Tennessee's subsequent secession and retired from politics, his spirit broken and in ill health. He joined a group of investors in saltworks and ironworks, purchasing a shared interest in the Cumberland Furnace near Charlotte, Tennessee
Charlotte, Tennessee
Charlotte is a town in Dickson County, Tennessee, United States. The population was 1,153 at the 2000 census. It is the county seat of Dickson County.-Geography:...
. However, most of his businesses were severely damaged or ruined during the Civil War. In 1869 Bell died at his home on the banks of the Cumberland River
Cumberland River
The Cumberland River is a waterway in the Southern United States. It is long. It starts in Harlan County in far southeastern Kentucky between Pine and Cumberland mountains, flows through southern Kentucky, crosses into northern Tennessee, and then curves back up into western Kentucky before...
, near the Cumberland Furnace not far from Dover, Tennessee
Dover, Tennessee
Dover is a city in Stewart County, Tennessee, United States, westnorthwest of Nashville on the Cumberland River. An old national cemetery is in Dover. The population was 1,442 at the 2000 census...
. He was buried in Nashville's Mt. Olivet Cemetery.