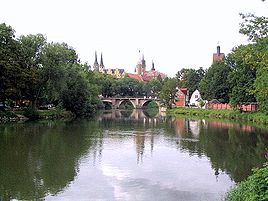 Johannes Knolleisen was a German
Germany
Germany , officially the Federal Republic of Germany , is a federal parliamentary republic in Europe. The country consists of 16 states while the capital and largest city is Berlin. Germany covers an area of 357,021 km2 and has a largely temperate seasonal climate...
theological
Theology
Theology is the systematic and rational study of religion and its influences and of the nature of religious truths, or the learned profession acquired by completing specialized training in religious studies, usually at a university or school of divinity or seminary.-Definition:Augustine of Hippo...
professor.

Nothing is known about his parents and his youth, aside from his being born in Allenstein
Olsztyn
Olsztyn is a city in northeastern Poland, on the Łyna River. Olsztyn has been the capital of the Warmian-Masurian Voivodeship since 1999. It was previously in the Olsztyn Voivodeship...
in Warmia
Warmia
Warmia or Ermland is a region between Pomerelia and Masuria in northeastern Poland. Together with Masuria, it forms the Warmian-Masurian Voivodeship....
(today Olsztyn, Poland
Poland
Poland , officially the Republic of Poland , is a country in Central Europe bordered by Germany to the west; the Czech Republic and Slovakia to the south; Ukraine, Belarus and Lithuania to the east; and the Baltic Sea and Kaliningrad Oblast, a Russian exclave, to the north...
). He received his magister
Magister
Magister is Latin for "master" or "teacher." It may refer to:* The Magister , an academic degreePositions or titles* A magister equitum, or Master of the Horse...
degree in theology from the University of Leipzig
University of Leipzig
The University of Leipzig , located in Leipzig in the Free State of Saxony, Germany, is one of the oldest universities in the world and the second-oldest university in Germany...
, becoming rector of the university in 1478. Knolleisen became canon
Canon (priest)
A canon is a priest or minister who is a member of certain bodies of the Christian clergy subject to an ecclesiastical rule ....
at Merseburg Cathedral
Merseburg Cathedral
Merseburg Cathedral is a cathedral in Merseburg, Germany. Construction on the Gothic cathedral was begun by Bishop Thietmar of Merseburg in 1015. It was consecrated in 1021 in the presence of Henry II. The cathedral was renovated in the Renaissance style from 1510-17. It is considered an artistic...
in Merseburg
Merseburg
Merseburg is a town in the south of the German state of Saxony-Anhalt on the river Saale, approx. 14 km south of Halle . It is the capital of the Saalekreis district. It had a diocese founded by Archbishop Adalbert of Magdeburg....
in 1489. By the time of his death in 1511, Knolleisen and Lucas David
Lucas David
Lucas David was a Prussian historian, who from ca. 1550 on compiled extensive volumes on Prussian history....
had created a stipend
Stipend
A stipend is a form of salary, such as for an internship or apprenticeship. It is often distinct from a wage or a salary because it does not necessarily represent payment for work performed, instead it represents a payment that enables somebody to be exempt partly or wholly from waged or salaried...
of 700 Rhenish gulden to help two worthy students from Allenstein study in Leipzig
Leipzig
Leipzig Leipzig has always been a trade city, situated during the time of the Holy Roman Empire at the intersection of the Via Regia and Via Imperii, two important trade routes. At one time, Leipzig was one of the major European centres of learning and culture in fields such as music and publishing...
.