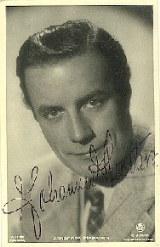 Encyclopedia
Johan Marius Nicolaas "Johannes" Heesters (born 5 December 1903) is a Dutch actor, singer and entertainer with a -year career, almost exclusively in the German-speaking world. In Germany and Austria, Heesters is mainly known for his acting career. , aged , Heesters is the oldest performer worldwide who is still active, both on the stage
Theatre
Theatre is a collaborative form of fine art that uses live performers to present the experience of a real or imagined event before a live audience in a specific place. The performers may communicate this experience to the audience through combinations of gesture, speech, song, music or dance...
and on television
Television
Television is a telecommunication medium for transmitting and receiving moving images that can be monochrome or colored, with accompanying sound...
.

Heesters was born in Amersfoort
Amersfoort
Amersfoort is a municipality and the second largest city of the province of Utrecht in central Netherlands. The city is growing quickly but has a well-preserved and protected medieval centre. Amersfoort is one of the largest railway junctions in the country, because of its location on two of the...
, Netherlands, the youngest of four sons. His father Jacobus Heesters (1865–1946) was a salesman and his mother Geertruida Jacoba van den Heuvel (1866–1951), a homemaker. Heesters decided to become an actor and a singer at the age of sixteen and began vocal training. Heesters very early in his career specialized in Viennese operetta
Operetta
Operetta is a genre of light opera, light in terms both of music and subject matter. It is also closely related, in English-language works, to forms of musical theatre.-Origins:...
, making his Viennese stage debut in 1934 in Carl Millöcker's Der Bettelstudent
Der Bettelstudent
Der Bettelstudent is an operetta in three acts by Carl Millöcker with a German libretto by Camillo Walzel and Richard Genée, based on Les noces de Fernande by Victorien Sardou and The Lady of Lyons by Edward Bulwer-Lytton...
(The Beggar Student) after having relocated to Germany for career. Heesters was fluent in German from a very early age having lived for several years in the household of a German grand-uncle from Bavaria.

Heesters permanently moved to Germany with his wife and daughters in 1935, aged 31. During his time there, he performed for Adolf Hitler and visited the Dachau concentration camp which has made him a controversial figure amongst some Dutch. Goebbels
Joseph Goebbels
Paul Joseph Goebbels was a German politician and Reich Minister of Propaganda in Nazi Germany from 1933 to 1945. As one of Adolf Hitler's closest associates and most devout followers, he was known for his zealous oratory and anti-Semitism...
placed Heesters on the Gottbegnadeten list
Gottbegnadeten list
The Gottbegnadeten list was a 36-page list of artists considered crucial to Nazi culture. The list was assembled in September 1944 by Joseph Goebbels, the head of the Ministry of Public Enlightenment and Propaganda, and Germany's dictator Adolf Hitler.The list exempted the designated artists from...
as an artist considered crucial to Nazi culture.

He has been known to have funded the German war machine by donating money to the weapon industry. For this, Heesters became a very controversial figure in the late 1970s. Heesters, however, has always denied these accusations despite the existence of proof.

Heesters befriended several highranking Nazi-officials and SS-officers
Schutzstaffel
The Schutzstaffel |Sig runes]]) was a major paramilitary organization under Adolf Hitler and the Nazi Party. Built upon the Nazi ideology, the SS under Heinrich Himmler's command was responsible for many of the crimes against humanity during World War II...
. Mr. "Jopie" also performed regularly for people such as Hitler and Goering, the first of whom was known to be an avid admirer of his acting skills. Throughout the war Heester kept performing for German soldiers in camps and barracks. He has always denied having visited concentration camps, although he did have knowledge of their existence.

According to German author Volker Kühn, Heesters did in fact perform for the SS in Dachau concentration camp. For this claim he uses as evidence the testimony of Dachau inmate Viktor Matejka who worked for the SS and told Kühn he pulled the curtain when Heesters performed in 1941. According to German writer Jürgen Trimborn however, the interview with Matejka may not be reliable as it occurred some fifty years after the performance was said to have taken place. In December 2009, Heesters lost his libel suit against Kühn. While acknowledging having visited the camp, Heesters denies having performed as entertainment for the SS troops. In its ruling, the German court did not find that Kühn's allegations were true, but rather that too much time had passed for an accurate determination of fact to be made.

Heesters worked extensively for UFA
Universum Film AG
Universum Film AG, better known as UFA or Ufa, is a film company that was the principal film studio in Germany, home of the German film industry during the Weimar Republic and through World War II, and a major force in world cinema from 1917 to 1945...
until almost the end of the Second World War
World War II
World War II, or the Second World War , was a global conflict lasting from 1939 to 1945, involving most of the world's nations—including all of the great powers—eventually forming two opposing military alliances: the Allies and the Axis...
(his last wartime movie being Die Fledermaus
Die Fledermaus
Die Fledermaus is an operetta composed by Johann Strauss II to a German libretto by Karl Haffner and Richard Genée.- Literary sources :...
, produced in 1945) and easily made the transition from the Nazi-controlled cultural scene to post-war Germany and Austria, appearing again in a number of films. These included Die Jungfrau auf dem Dach
Die Jungfrau auf dem Dach
Die Jungfrau auf dem Dach is a 1954 American comedy film produced and directed by Otto Preminger. The screenplay by Carl Zuckmayer is a German language translation of the script for The Moon is Blue by F...
and the 1957 version of Viktor und Viktoria
Viktor und Viktoria
Viktor and Viktoria is a 1933 German musical comedy film directed by Reinhold Schünzel, starring Renate Müller as a woman pretending to be a female impersonator...
. Heesters stopped making movies around 1960 to concentrate on stage and television appearances and on producing record
Gramophone record
A gramophone record, commonly known as a phonograph record , vinyl record , or colloquially, a record, is an analog sound storage medium consisting of a flat disc with an inscribed, modulated spiral groove...
s.

Heesters' signature tune is Count Danilo Danilovitch's entrance song "Da geh' ich ins Maxim
Maxim's Paris
Maxim's is the name of a restaurant in Paris, France, located at No. 3 of the rue Royale. It is known for its art nouveau interior decor.-History:...
" from Franz Lehár
Franz Lehár
Franz Lehár was an Austrian-Hungarian composer. He is mainly known for his operettas of which the most successful and best known is The Merry Widow .-Biography:...
's Die Lustige Witwe (The Merry Widow
The Merry Widow
The Merry Widow is an operetta by the Austro–Hungarian composer Franz Lehár. The librettists, Viktor Léon and Leo Stein, based the story – concerning a rich widow, and her countrymen's attempt to keep her money in the principality by finding her the right husband – on an 1861 comedy play,...
). He met Hitler several times and was reportedly Hitler's favorite actor for the part of Danilo.

In recent years Heesters has spoken fondly of Hitler as a person, but has condemned his political stance. In the 1990s, he and his wife toured Germany and Austria with Curth Flatow
Curth Flatow
Curth Flatow was a German dramatist and screenwriter who started his career in post-war Germany specializing in light comedy. Flatow was born in Berlin. Many of his plays have been adapted for the big screen...
's play Ein gesegnetes Alter (A Blessed Age), which was also televised in 1996. On 5 December 2003, he celebrated his 100th birthday with a television special "Eine Legende wird 100" ("A legend turns 100") on the ARD
ARD (broadcaster)
ARD is a joint organization of Germany's regional public-service broadcasters...
television channel.

In December 2004, aged 101, Heesters appeared in Stuttgart at the Komödie im Marquardt theatre in a show commissioned on the occasion of his 100th birthday
Centenarian
A centenarian is a person who is or lives beyond the age of 100 years. Because current average life expectancies across the world are less than 100, the term is invariably associated with longevity. Much rarer, a supercentenarian is a person who has lived to the age of 110 or more, something only...
, Heesters – eine musikalische Hommage. In 2005 aged 102 he was featured as a soloist in a major concert tour with the Deutsches Filmorchester Babelsberg
Deutsches Filmorchester Babelsberg
The German Film Orchestra Babelsberg is a symphony orchestra based in Potsdam, Germany. It was founded in 1993 by Klaus Peter Beyer. The orchestra derives its name from the legendary Babelsberg Studios in Potsdam-Babelsberg, a city part of Potsdam today, where notable films such as Metropolis, Dr...
under the direction of Scott Lawton.

On 5 December 2006 Heesters celebrated his 103rd birthday with a concert at the Wiener Konzerthaus
Konzerthaus, Vienna
The Konzerthaus in Vienna was opened 1913. It is situated in the third district just at the edge of the first district in Vienna. Since it was founded it has always tried to emphasise both tradition and innovative musical styles.In 1890 the first ideas for a Haus für Musikfeste came about...
. On 5 December 2007 he celebrated his 104th birthday with a concert at the Admiralspalast
Admiralspalast
The Admiralspalast is a theatre in the Mitte district of Berlin, Germany, located on Friedrichstraße No. 101. Opened in 1910, it is one of the few preserved variety venues of the pre-World War II era in the city....
, Berlin, and in February 2008 he performed in his home country for the first time in four decades amidst protests against his Nazi associations.

Heesters is less active in his latest years and mostly plays smaller roles as he cannot be on stage for a long period of time due to his health. He is currently almost completely blind due to glaucoma
Glaucoma
Glaucoma is an eye disorder in which the optic nerve suffers damage, permanently damaging vision in the affected eye and progressing to complete blindness if untreated. It is often, but not always, associated with increased pressure of the fluid in the eye...
and macular degeneration
Macular degeneration
Age-related macular degeneration is a medical condition which usually affects older adults and results in a loss of vision in the center of the visual field because of damage to the retina. It occurs in “dry” and “wet” forms. It is a major cause of blindness and visual impairment in older adults...
. He still sings and plays small roles in musicals and is still capable of learning his lines.

In December 2010 aged 107, Heesters announced that he had quit smoking for his then 61 year old wife: "She should have me as long as possible".

On 1 January 2008, he fell down some stairs in his holiday house in Tyrol
Tyrol (state)
Tyrol is a state or Bundesland, located in the west of Austria. It comprises the Austrian part of the historical region of Tyrol.The state is split into two parts–called North Tyrol and East Tyrol–by a -wide strip of land where the state of Salzburg borders directly on the Italian province of...
and broke two ribs. On 29 November 2011, he suddenly became very ill and was rushed into the hospital.

Heesters apologised for statements made regarding Adolf Hitler on the widely watched German TV show Wetten, dass..?
Wetten, dass..?
Wetten, dass..? is a long-running German-language entertainment television show. It is the most successful Saturday television show in Europe...
on Saturday, 13 December 2008, aged 105. He said that he had said something stupid and horrible and asked for forgiveness. In addition, German media pointed out that the aged Heesters could not grasp the satiric nature of the TV show in question.