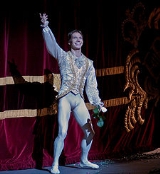 Johan Kobborg was born in Odense, Denmark into an artistic family; his mother is a former showgirl and actress and his brother is an actor. From a young age, he trained as a tenor, but left singing to take up dancing.

Kobborg began his professional training at the late age of , attending the Royal Danish Ballet School, where he was tutored in the Bournonville method of classical dance. He graduated in 1991.

Kobborg has also been the recipient of numerous prizes and awards, including the Nureyev
Rudolf Nureyev
Rudolf Khametovich Nureyev was a Russian dancer, considered one of the most celebrated ballet dancers of the 20th century. Nureyev's artistic skills explored expressive areas of the dance, providing a new role to the male ballet dancer who once served only as support to the women.In 1961 he...
International Competition (Grand Prix 1994), USA International Competition, Jackson, USA (Grand Prix 1994) and the Erik Bruhn
Erik Bruhn
Erik Belton Evers Bruhn was a Danish ballet dancer, choreographer, company director, actor, and author.- Biography :...
Competition (1993) and received a 2006 Laurence Olivier Award nomination for his production of La Sylphide.

Kobborg's performance as Albrecht in Giselle, alongside Alina Cojocaru as the title role was recorded in 2006 and aired in England on Boxing Day. It was released on DVD the following year.

Kobborg fell in love with his most frequent partner, Romanian dancer Alina Cojocaru
Alina Cojocaru
Alina Cojocaru is a female principal dancer with The Royal Ballet of London.-Early years:Alina Cojocaru was born and raised in Bucharest, Romania. She has one sister. From a young age she studied gymnastics...
and it was officially confirmed in 2005 that the two were having a romantic relationship off-stage. In May 2011, whilst Cojocaru was making a guest appearance with the American Ballet Theater, her dance partner was injured so Kobborg flew to New York City
New York City
New York is the most populous city in the United States and the center of the New York Metropolitan Area, one of the most populous metropolitan areas in the world. New York exerts a significant impact upon global commerce, finance, media, art, fashion, research, technology, education, and...
unexpectedly to fill in and surprised Cojocaru when he proposed to her on her 30th birthday at the Metropolitan Opera House. Their engagement was announced shortly afterwards.