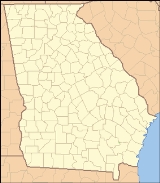 The Carters returned to Plains in January 1981. The former President and First Lady Rosalynn Carter
Rosalynn Carter
Eleanor Rosalynn Carter is the wife of the former President of the United States Jimmy Carter and in that capacity served as the First Lady of the United States from 1977 to 1981. As First Lady and after, she has been a leading advocate for numerous causes, perhaps most prominently for mental...
pursue many of the goals of his administration through the Carter Center
Carter Center
The Carter Center is a nongovernmental, not-for-profit organization founded in 1982 by former U.S. President Jimmy Carter and his wife Rosalynn Carter. In partnership with Emory University, The Carter Center works to advance human rights and alleviate human suffering...
in Atlanta, which has programs to alleviate human suffering and to promote human rights
Human rights
Human rights are "commonly understood as inalienable fundamental rights to which a person is inherently entitled simply because she or he is a human being." Human rights are thus conceived as universal and egalitarian . These rights may exist as natural rights or as legal rights, in both national...
and world peace
World peace
World Peace is an ideal of freedom, peace, and happiness among and within all nations and/or people. World peace is an idea of planetary non-violence by which nations willingly cooperate, either voluntarily or by virtue of a system of governance that prevents warfare. The term is sometimes used to...
. When they are in Plains, Carter teaches Sunday school
Sunday school
Sunday school is the generic name for many different types of religious education pursued on Sundays by various denominations.-England:The first Sunday school may have been opened in 1751 in St. Mary's Church, Nottingham. Another early start was made by Hannah Ball, a native of High Wycombe in...
at Maranatha Baptist Church, which is open to the public. The Jimmy Carter National Historic Site will also be the future grave site for President and Mrs. Carter.

The former Plains High School, where both Jimmy and Rosalynn Carter attended, now serves as the park's visitor center and museum. It features a classroom, principal's office, and auditorium which have been restored to look as they would have when Jimmy Carter attended. Other rooms feature exhibits that explain the lives of Jimmy and Rosalynn Carter, and a short video focuses on the life of Jimmy Carter according to his friends, neighbors, and family.

The farm where Jimmy lived from age four in 1928 until he left for college in 1941, has been restored to its appearance before electricity was installed in 1938.

The former Plains Train Depot, where Carter headquartered his presidential campaign, now serves as a museum focusing on the 1976 Presidential Campaign and Election. It features exhibits which highlight Jimmy Carter's campaign for President. The train depot operated from 1888 until 1951, when all public transportation to and from the area ceased.