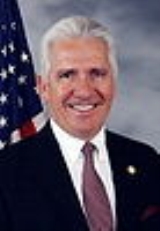 Encyclopedia
James Manuel "Jim" Costa (born April 13, 1952) is the U.S. Representative
United States House of Representatives
The United States House of Representatives is one of the two Houses of the United States Congress, the bicameral legislature which also includes the Senate.The composition and powers of the House are established in Article One of the Constitution...
for , serving since his initial election in 2004. He is a member of the Democratic Party
Democratic Party (United States)
The Democratic Party is one of two major contemporary political parties in the United States, along with the Republican Party. The party's socially liberal and progressive platform is largely considered center-left in the U.S. political spectrum. The party has the lengthiest record of continuous...
. The district takes in large and predominantly Latino
Latino
The demonyms Latino and Latina , are defined in English language dictionaries as:* "a person of Latin-American descent."* "A Latin American."* "A person of Hispanic, especially Latin-American, descent, often one living in the United States."...
portions of Fresno
Fresno
Fresno is the fifth largest city in California.Fresno may also refer to:-Places:Colombia* Fresno, TolimaSpain* Fresno, a ghost village in Nidáliga, Valle de Sedano, Burgos* Aldea del Fresno, Madrid* Fresno de la Vega, Ribera del Esla, León...
and Bakersfield in the Central Valley.

Born in Fresno
Fresno
Fresno is the fifth largest city in California.Fresno may also refer to:-Places:Colombia* Fresno, TolimaSpain* Fresno, a ghost village in Nidáliga, Valle de Sedano, Burgos* Aldea del Fresno, Madrid* Fresno de la Vega, Ribera del Esla, León...
, Costa is a third-generation family farmer. His grandparents emigrated from Portugal
Portugal
Portugal , officially the Portuguese Republic is a country situated in southwestern Europe on the Iberian Peninsula. Portugal is the westernmost country of Europe, and is bordered by the Atlantic Ocean to the West and South and by Spain to the North and East. The Atlantic archipelagos of the...
's Azores Islands in the early 20th century. He attended San Joaquin Memorial High School
San Joaquin Memorial High School
San Joaquin Memorial High School is a private Catholic high school located in Fresno, California. Founded in 1945, it is the only Catholic high school located in the greater Fresno area. It is located in the Roman Catholic Diocese of Fresno with a current enrollment of about 620 students...
and graduated in the class of 1970. He then graduated in 1974 from Fresno State
California State University, Fresno
California State University, Fresno, often referred to as Fresno State University and synonymously known in athletics as Fresno State , is one of the leading campuses of the California State University system, located at the northeast edge of Fresno, California, USA.The campus sits at the foot of...
, where he was a member of Sigma Alpha Epsilon
Sigma Alpha Epsilon
Sigma Alpha Epsilon is a North American Greek-letter social college fraternity founded at the University of Alabama on March 9, 1856. Of all existing national social fraternities today, Sigma Alpha Epsilon is the only one founded in the Antebellum South...
. He worked as a special assistant to Congressman John Krebs
John Hans Krebs
John Hans Krebs is a former U.S. Representative from California.Born in Berlin, Germany, Krebs moved to Israel in 1933 and attended Balfour School , 1937.He graduated from Ben Yehuda College in 1945....
from 1975 to 1976, and as administrative assistant to Assemblyman Richard Lehman
Richard H. Lehman
Richard Henry "Rick" Lehman is a former member of the United States House of Representatives from California who served from 1983 to 1995; he was previously a member of the California State Assembly....
from 1976 to 1978.


Like most Democrats from the Central Valley, Costa is somewhat more conservative than is typical for Democrats from California. He is a member of the Blue Dog Coalition.

In 2004, Costa entered the Democratic primary for the 20th District, which was opened up by the retirement of its seven-term incumbent, Cal Dooley
Cal Dooley
Calvin M. "Cal" Dooley , American politician, was a Democratic member of the United States House of Representatives from 1991 to 2005, representing the 17th and 20th districts of California....
. While Dooley endorsed his chief of staff, Lisa Quigley, as his successor, nearly all of the state Democratic establishment, including Senator
United States Senate
The United States Senate is the upper house of the bicameral legislature of the United States, and together with the United States House of Representatives comprises the United States Congress. The composition and powers of the Senate are established in Article One of the U.S. Constitution. Each...
Dianne Feinstein
Dianne Feinstein
Dianne Goldman Berman Feinstein is the senior U.S. Senator from California. A member of the Democratic Party, she has served in the Senate since 1992. She also served as 38th Mayor of San Francisco from 1978 to 1988....
, endorsed Costa. Costa won a bruising primary and faced Republican Party
Republican Party (United States)
The Republican Party is one of the two major contemporary political parties in the United States, along with the Democratic Party. Founded by anti-slavery expansion activists in 1854, it is often called the GOP . The party's platform generally reflects American conservatism in the U.S...
state senator Roy Ashburn
Roy Ashburn
Roy Arthur Ashburn is an American politician from Kern County, California. A Republican, he served as a California State Senator from 2002 to 2010 representing the 18th district. He previously served three terms in the California State Assembly, representing the 32nd district and 12 years on the...
in November.

On paper, Costa was an overwhelming favorite. The 20th district is a heavily Democratic, 63% Latino-majority district; it gave Al Gore
Al Gore
Albert Arnold "Al" Gore, Jr. served as the 45th Vice President of the United States , under President Bill Clinton. He was the Democratic Party's nominee for President in the 2000 U.S. presidential election....
his highest vote total outside the state's two large conurbation
Conurbation
A conurbation is a region comprising a number of cities, large towns, and other urban areas that, through population growth and physical expansion, have merged to form one continuous urban and industrially developed area...
s (Sacramento
Sacramento, California
Sacramento is the capital city of the U.S. state of California and the county seat of Sacramento County. It is located at the confluence of the Sacramento River and the American River in the northern portion of California's expansive Central Valley. With a population of 466,488 at the 2010 census,...
and the San Francisco Bay Area
San Francisco Bay Area
The San Francisco Bay Area, commonly known as the Bay Area, is a populated region that surrounds the San Francisco and San Pablo estuaries in Northern California. The region encompasses metropolitan areas of San Francisco, Oakland, and San Jose, along with smaller urban and rural areas...
in the north and Los Angeles
Los Ángeles
Los Ángeles is the capital of the province of Biobío, in the commune of the same name, in Region VIII , in the center-south of Chile. It is located between the Laja and Biobío rivers. The population is 123,445 inhabitants...
and San Diego to the south). Nonetheless, the Republicans spent a substantial amount of money on the race. Ashburn's campaign made plays on Costa's name, "Costa's going to cost ya," and linked him to former Governor Gray Davis
Gray Davis
Joseph Graham "Gray" Davis, Jr. is an American Democratic politician who served as California's 37th Governor from 1999 until being recalled in 2003...
, calling them "two taxing twins." Ultimately, Costa won the election with 54% of the vote to Ashburn's 46%. Ashburn only kept the margin within single digits by winning heavily Republican Kings County
Kings County, California
Kings County is a county located in the Central Valley of the U.S. state of California. It is located in a rich agricultural region. Kings County is also home to NAS Lemoore, which is the U.S. Navy's newest and largest master jet air station. The county seat is Hanford...
.

Costa was reelected in 2008 with 74 percent of the vote, the highest percentage for a Democratic incumbent outside Sacramento, the Bay Area and Southern California.

Costa was challenged for reelection by Republican nominee Andy Vidak. In his closest race yet, the race was officially called for Costa nearly three weeks after Election Day, with the unofficial final tally standing at 45,806 votes (51.8%) for Costa and 42,773 votes (48.2%) for Vidak.