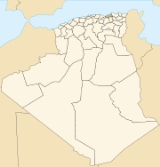 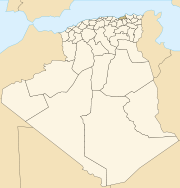 Jijel is the capital of Jijel Province
Jijel Province
Jijel is a province in Algeria in the eastern Mediterranean cost. The capital is Jijel . Taza National Park is there.-Administrative divisions:...
in northeastern Algeria
Algeria
Algeria , officially the People's Democratic Republic of Algeria , also formally referred to as the Democratic and Popular Republic of Algeria, is a country in the Maghreb region of Northwest Africa with Algiers as its capital.In terms of land area, it is the largest country in Africa and the Arab...
. It is flanked by the Mediterranean Sea
Mediterranean Sea
The Mediterranean Sea is a sea connected to the Atlantic Ocean surrounded by the Mediterranean region and almost completely enclosed by land: on the north by Anatolia and Europe, on the south by North Africa, and on the east by the Levant...
in the region of Corniche Jijelienne
Corniche Jijelienne
Corniche Jjilienne is a region of northern Algeria characterised by rocky forested massifs rising above the coastal plain. The forested areas provide some of the last extant habitat for the endangered Barbary Macaque, Macaca sylvanus; this primate prehistorically had a much wider distribution in...
, and has an estimated population of 148,000 inhabitants (2007).

Jijel is the administrative and trade centre for a region specializing in cork
Cork (material)
Cork is an impermeable, buoyant material, a prime-subset of bark tissue that is harvested for commercial use primarily from Quercus suber , which is endemic to southwest Europe and northwest Africa...
processing, leather
Leather
Leather is a durable and flexible material created via the tanning of putrescible animal rawhide and skin, primarily cattlehide. It can be produced through different manufacturing processes, ranging from cottage industry to heavy industry.-Forms:...
tanning
Tanning
Tanning is the making of leather from the skins of animals which does not easily decompose. Traditionally, tanning used tannin, an acidic chemical compound from which the tanning process draws its name . Coloring may occur during tanning...
and steelmaking
Steelmaking
Steelmaking is the second step in producing steel from iron ore. In this stage, impurities such as sulfur, phosphorus, and excess carbon are removed from the raw iron, and alloying elements such as manganese, nickel, chromium and vanadium are added to produce the exact steel required.-Older...
. Local crop
Crop
Crop may refer to:* Crop, a plant grown and harvested for agricultural use* Crop , part of the alimentary tract of some animals* Crop , a modified whip used in horseback riding or disciplining humans...
s include citrus
Citrus
Citrus is a common term and genus of flowering plants in the rue family, Rutaceae. Citrus is believed to have originated in the part of Southeast Asia bordered by Northeastern India, Myanmar and the Yunnan province of China...
and grain
GRAIN
GRAIN is a small international non-profit organisation that works to support small farmers and social movements in their struggles for community-controlled and biodiversity-based food systems. Our support takes the form of independent research and analysis, networking at local, regional and...
. Fishing is also of great importance. Tourists (mainly Algerians) are attracted to Jijel for its landscapes and fine sand beaches. Being a resort town
Resort town
A resort town, sometimes called a resort city or resort destination, is a town or area where tourism or vacationing is a primary component of the local culture and economy...
, there are many hotels and restaurants. There are Phoenician tombs nearby.

Due to the rugged landscape, Jijel is slightly isolated. However, it is connected by road to large cities like Bejaïa
Béjaïa
Béjaïa, Vgaiet or Bejaya is a Mediterranean port city on the Gulf of Béjaïa in Algeria; it is the capital of Béjaïa Province, Kabylia. Under French rule, it was formerly known under various European names, such as Budschaja in German, Bugia in Italian, and Bougie...
(90 km west), Setif
Sétif
Sétif |Colonia]]) is a town in northeastern Algeria. It is the capital of Sétif Province and it has a population of 239,195 inhabitants as of the 1998 census. Setif is located to the east of Algiers and is the second most important Wilaya after the country's capital. It is 1,096 meters above sea...
(135 km southwest) and Constantine
Constantine, Algeria
Constantine is the capital of Constantine Province in north-eastern Algeria. It was the capital of the same-named French département until 1962. Slightly inland, it is about 80 kilometres from the Mediterranean coast, on the banks of Rhumel river...
(150 km southeast). The city also has its own airport Jijel Ferhat Abbas Airport
Jijel Ferhat Abbas Airport
Jijel Ferhat Abbas Airport , also known as Ferhat Abbas Airport, is an airport near Jijel, Algeria.-Airlines:...
.

Jijel is built along modern patterns with wide streets framed by trees. The surroundings consist largely of dense cork-oak forest
Forest
A forest, also referred to as a wood or the woods, is an area with a high density of trees. As with cities, depending where you are in the world, what is considered a forest may vary significantly in size and have various classification according to how and what of the forest is composed...
. A peninsula
Peninsula
A peninsula is a piece of land that is bordered by water on three sides but connected to mainland. In many Germanic and Celtic languages and also in Baltic, Slavic and Hungarian, peninsulas are called "half-islands"....
lies right out from the coast and there is a citadel
Citadel
A citadel is a fortress for protecting a town, sometimes incorporating a castle. The term derives from the same Latin root as the word "city", civis, meaning citizen....
to the north. There is a hospital, previously a catholic church (but which was demolished), mosques and The Jijel University.

Jijel (Igilgili), was first inhabited by Berbers tribes, most known were the Kutama
Kutama
The Kutama were a powerful Berber tribe, in the region of Jijel , a member of the great Sanhaja confederation of the Maghrib and the armed body of the Fatimid Caliphate.-Origins of the Kutama:...
. Originally a Phoenicia
Phoenicia
Phoenicia , was an ancient civilization in Canaan which covered most of the western, coastal part of the Fertile Crescent. Several major Phoenician cities were built on the coastline of the Mediterranean. It was an enterprising maritime trading culture that spread across the Mediterranean from 1550...
n trading post, the city passed successively to the Romans, the Vandals, the Arabs, the Genoese and, in the 16th century, to the Ottoman Admiral Hayreddin Barbarossa. In July 1664, the French took the city. Resistance was organized under the direction of Shaban Aga and the French were driven out in October of the same year. Jijel remained a Corsair stronghold until captured by the French in 1839. Strong local resistance, finally subdued in 1851, resulted in the construction of three forts along its southern fringe as well as minimal colonization. The original town was devastated by an earthquake
Earthquake
An earthquake is the result of a sudden release of energy in the Earth's crust that creates seismic waves. The seismicity, seismism or seismic activity of an area refers to the frequency, type and size of earthquakes experienced over a period of time...
in 1856.

A relatively new port has been built at Djen Djen, approximately 7 miles east of Jijel, which can handle large bulk carriers having depths up 18.2m.
Presently, the port is mainly used by car carriers and break bulk vessels.
The source of this article is wikipedia, the free encyclopedia.  The text of this article is licensed under the GFDL.