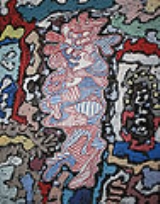 Encyclopedia
Jean Philippe Arthur Dubuffet (31 July 1901 – 12 May 1985) was a French
France
The French Republic , The French Republic , The French Republic , (commonly known as France , is a unitary semi-presidential republic in Western Europe with several overseas territories and islands located on other continents and in the Indian, Pacific, and Atlantic oceans. Metropolitan France...
painter
Painting
Painting is the practice of applying paint, pigment, color or other medium to a surface . The application of the medium is commonly applied to the base with a brush but other objects can be used. In art, the term painting describes both the act and the result of the action. However, painting is...
and sculptor
Sculpture
Sculpture is three-dimensional artwork created by shaping or combining hard materials—typically stone such as marble—or metal, glass, or wood. Softer materials can also be used, such as clay, textiles, plastics, polymers and softer metals...
. His idealistic approach to aesthetics embraced so called "low art" and eschewed traditional standards of beauty in favor of what he believed to be a more authentic and humanistic approach to image-making.

Dubuffet was born in Le Havre
Le Havre
Le Havre is a city in the Seine-Maritime department of the Haute-Normandie region in France. It is situated in north-western France, on the right bank of the mouth of the river Seine on the English Channel. Le Havre is the most populous commune in the Haute-Normandie region, although the total...
. He moved to Paris
Paris
Paris is the capital and largest city in France, situated on the river Seine, in northern France, at the heart of the Île-de-France region...
in 1918 to study painting
Painting
Painting is the practice of applying paint, pigment, color or other medium to a surface . The application of the medium is commonly applied to the base with a brush but other objects can be used. In art, the term painting describes both the act and the result of the action. However, painting is...
at the Académie Julian
Académie Julian
The Académie Julian was an art school in Paris, France.Rodolphe Julian established the Académie Julian in 1868 at the Passage des Panoramas, as a private studio school for art students. The Académie Julian not only prepared students to the exams at the prestigious École des Beaux-Arts, but offered...
, but after six months he left the Académie to study independently. In 1924, doubting the value of art, he stopped painting and took over his father's business selling wine
Wine
Wine is an alcoholic beverage, made of fermented fruit juice, usually from grapes. The natural chemical balance of grapes lets them ferment without the addition of sugars, acids, enzymes, or other nutrients. Grape wine is produced by fermenting crushed grapes using various types of yeast. Yeast...
. He took up painting again in the 1930s, when he made a large series of portraits in which he emphasized the vogues in art history. But again stopped, only turning to art for good in 1942 when he started to paint figures of nude women in a impersonal and primitive way, in strong and unbroken colours. Also he chose as subjects people in the commonplace of everyday life, such as people sitting in the underground, or just walking in the country. His first solo show came in 1944.

Influenced by Hans Prinzhorn
Hans Prinzhorn
Hans Prinzhorn was a German psychiatrist and art historian.Born in Hemer, Westphalia, he studied art history and philosophy at the University of Vienna, receiving his doctorate in 1908. He then went to England to receive voice training, as he planned to become a professional singer...
's book Artistry of the Mentally Ill
Artistry of the Mentally Ill
Artistry of the Mentally Ill was a 1922 book by psychiatrist Hans Prinzhorn, and is known as the work that launched the field of psychiatric art...
, Dubuffet coined the term Art Brut
Outsider Art
The term outsider art was coined by art critic Roger Cardinal in 1972 as an English synonym for art brut , a label created by French artist Jean Dubuffet to describe art created outside the boundaries of official culture; Dubuffet focused particularly on art by insane-asylum inmates.While...
(meaning "raw art," oftentimes referred to as ‘outsider art’) for art produced by non-professionals working outside aesthetic norms, such as art by psychiatric patients, prisoners, and children. He amassed his own collection of such art, including artists such as Aloïse Corbaz
Aloïse Corbaz
Aloïse Corbaz was a Swiss outsider artist included in Jean Dubuffet's initial collection of psychiatric art. She is one of very few acclaimed female outsider artists....
and Adolf Wölfli
Adolf Wölfli
Adolf Wölfli was a Swiss artist who was one of the first artists to be associated with the Art Brut or outsider art label.-Early life:...
. The collection is now housed at the Musée de l'Art Brut in Lausanne
Lausanne
Lausanne is a city in Romandy, the French-speaking part of Switzerland, and is the capital of the canton of Vaud. The seat of the district of Lausanne, the city is situated on the shores of Lake Geneva . It faces the French town of Évian-les-Bains, with the Jura mountains to its north-west...
, Switzerland. Dubuffet sought to create an art as free from intellectual concerns as Art Brut, and his work often appears primitive and child-like.

Many of Dubuffet's works are painted in oil paint
Oil paint
Oil paint is a type of slow-drying paint that consists of particles of pigment suspended in a drying oil, commonly linseed oil. The viscosity of the paint may be modified by the addition of a solvent such as turpentine or white spirit, and varnish may be added to increase the glossiness of the...
using an impasto
Impasto
In English, the borrowed Italian word impasto most commonly refers to a technique used in painting, where paint is laid on an area of the surface very thickly, usually thickly enough that the brush or painting-knife strokes are visible. Paint can also be mixed right on the canvas...
thickened by materials such as sand
Sand
Sand is a naturally occurring granular material composed of finely divided rock and mineral particles.The composition of sand is highly variable, depending on the local rock sources and conditions, but the most common constituent of sand in inland continental settings and non-tropical coastal...
, tar
Tar
Tar is modified pitch produced primarily from the wood and roots of pine by destructive distillation under pyrolysis. Production and trade in tar was a major contributor in the economies of Northern Europe and Colonial America. Its main use was in preserving wooden vessels against rot. The largest...
and straw
Straw
Straw is an agricultural by-product, the dry stalks of cereal plants, after the grain and chaff have been removed. Straw makes up about half of the yield of cereal crops such as barley, oats, rice, rye and wheat. It has many uses, including fuel, livestock bedding and fodder, thatching and...
, giving the work an unusually textured surface. From 1962 he produced a series of works in which he limited himself to the colours red, white, black, and blue. Towards the end of the 1960s he turned increasingly to sculpture
Sculpture
Sculpture is three-dimensional artwork created by shaping or combining hard materials—typically stone such as marble—or metal, glass, or wood. Softer materials can also be used, such as clay, textiles, plastics, polymers and softer metals...
, producing works in polystyrene
Polystyrene
Polystyrene ) also known as Thermocole, abbreviated following ISO Standard PS, is an aromatic polymer made from the monomer styrene, a liquid hydrocarbon that is manufactured from petroleum by the chemical industry...
which he then painted with vinyl
Vinyl
A vinyl compound is any organic compound that contains a vinyl group ,which are derivatives of ethene, CH2=CH2, with one hydrogen atom replaced with some other group...
paint
Paint
Paint is any liquid, liquefiable, or mastic composition which after application to a substrate in a thin layer is converted to an opaque solid film. One may also consider the digital mimicry thereof...
.

In late 1960-1961, Dubuffet began experimenting with music and sound and made several recordings with the Danish painter Asger Jorn
Asger Jorn
Asger Oluf Jorn was a Danish painter, sculptor, ceramic artist, and author. He was a founding member of the avant-garde movement COBRA and the Situationist International...
, a founding member of the avant-garde movement COBRA
COBRA (avant-garde movement)
COBRA was a European avant-garde movement active from 1948 to 1951. The name was coined in 1948 by Christian Dotremont from the initials of the members' home cities: Copenhagen , Brussels , Amsterdam .-History:...
. The same period he started making sculpture, but in a very not-sculptural way. As his medium he preferred to use the ordinary materials as papier mâchier and for all the light medium polystyrene, in which he could model very fast and switch easily from one work to another, as sketches on paper. At the end of the sixties he started to create his large sculpture-habitations, such as 'Tour aux figures', 'Jardin d'Hiver' and 'Villa Falbala' in which people can wander, stay, contemplate etc.
In 1969 ensued an acquaintance between him and the French Outsider Art artist Jacques Soisson
Jacques Soisson
Jacques Soisson is a French artist as well as a child and adolescent psychotherapist. He paints in the manner of Art Brut.- Life :...
.

In 1978 Dubuffet collaborated with American composer and musician Jasun Martz
Jasun Martz
Jasun Martz is an American record producer, composer, musician, fine artist, creative director and sculptor who has worked on several international hit records. He has recorded with Michael Jackson, toured with Frank Zappa and helped arrange the hit "We Built This City" by Starship.Martz has lived...
to create the record album artwork for Martz’s avant-garde symphony entitled The Pillory. The much written about drawing has been reproduced internationally in three different editions on tens-of-thousands of record albums and compact discs. A detail of the drawing is also featured on Martz’s second symphony (2005), The Pillory/The Battle, performed by The Intercontinental Philharmonic Orchestra and Royal Choir.

One of Dubuffet's later works was Monument With Standing Beast
Monument With Standing Beast
Monument with Standing Beast is a sculpture by Jean Dubuffet in front of the Helmut Jahn designed James R. Thompson Center in the Loop community area of Chicago, Illinois. Its location is across the street from Chicago City Hall to the South and diagonal across the street from the Daley Center to...
(1984). Dubuffet died in Paris
Paris
Paris is the capital and largest city in France, situated on the river Seine, in northern France, at the heart of the Île-de-France region...
in 1985. The Fondation Jean Dubuffet
Fondation Jean Dubuffet
The Fondation Jean Dubuffet is a foundation established by artist Jean Dubuffet in 1973. Its registered office is on the Rue de Moulin Neuf, Sente des Vaux-Ruelle aux Chevaux, Périgny-sur-Yerres, Val-de-Marne, with the secretariat located in the VIe arrondissement at 137 Rue de Sèvres, Paris, France...
collects and exhibits his work. The Dubuffet Foundation is represented by The Pace Gallery
Pace Gallery
The Pace Gallery is a New York City-based exhibition space. It was founded in 1960 in Boston by Arne Glimcher.-PaceWildenstein:From 1993 until April 1, 2010, the gallery became "PaceWildenstein," a joint business venture between the Pace Gallery and Wildenstein & Co....
, New York.