Encyclopedia
The chelicerae are mouthparts of the Chelicerata
Chelicerata
The subphylum Chelicerata constitutes one of the major subdivisions of the phylum Arthropoda, and includes horseshoe crabs, scorpions, spiders and mites...
, an arthropod
Arthropod
An arthropod is an invertebrate animal having an exoskeleton , a segmented body, and jointed appendages. Arthropods are members of the phylum Arthropoda , and include the insects, arachnids, crustaceans, and others...
subphylum
Subphylum
In life, a subphylum is a taxonomic rank intermediate between phylum and superclass. The rank of subdivision in plants and fungi is equivalent to subphylum.Not all phyla are divided into subphyla...
that includes arachnid
Arachnid
Arachnids are a class of joint-legged invertebrate animals in the subphylum Chelicerata. All arachnids have eight legs, although in some species the front pair may convert to a sensory function. The term is derived from the Greek words , meaning "spider".Almost all extant arachnids are terrestrial...
s, Merostomata
Merostomata
Merostomata is the name given to a grouping of the extinct Eurypterida and the Xiphosura . The term was originally used by James Dwight Dana to refer to Xiphosura only, but was emended by Henry Woodward to cover both groups....
(horseshoe crabs), and Pycnogonida (sea spiders). Chelicerae are pointed appendages which are used to grasp food, and are found in place of the chewing mandibles most other arthropods have. Additionally, some chelicerae, such as those found in spider
Spider
Spiders are air-breathing arthropods that have eight legs, and chelicerae with fangs that inject venom. They are the largest order of arachnids and rank seventh in total species diversity among all other groups of organisms...
s, are hollow and contain (or are connected to) venom glands, and are used to inject venom
Venom
Venom is the general term referring to any variety of toxins used by certain types of animals that inject it into their victims by the means of a bite or a sting...
into prey or a (perceived) threat.

Jackknife chelicera presents two different forms: orthognathous and labidognathous. Orthognathous chelicerae are articulated in a manner that enables movements of the appendages parallel to the body axis. This kind of chelicera occurs in the Liphistiomorphae and Mygalomorphae
Mygalomorphae
The Mygalomorphae, , are an infraorder of spiders. The latter name comes from the orientation of the fangs which point straight down and do not cross each other .-Description:...
spiders and in the related orders Amblypygi, Schizomida, Thelyphonida. Labidognathous chelicerae moves at right angles to the body axis. This kind of chelicera is rotated and occurs exclusively in the Araneomorphae
Araneomorphae
The Araneomorphae are a suborder of spiders. They are distinguished by having fangs that oppose each other and cross in a pinching action, in contrast to the Mygalomorphae , which have fangs that are nearly parallel in alignment.- Distinguishing characteristics :Note the difference in the...
spiders.

The chelicerae consist of a base segment that articulates with the cephalothorax
Cephalothorax
The cephalothorax is a tagma of various arthropods, comprising the head and the thorax fused together, as distinct from the abdomen behind. The word cephalothorax is derived from the Greek words for head and thorax...
and a fang
Fang
Fang is a mammal's canine tooth.Fang may also refer to:* A snake's poison-injecting tooth: see snake venom* Fang people, in Central Africa* Fang language, spoken by Fang people...
portion that articulates with the base segment. An analogy for this is a two-segment finger, the outer segment of which consists of a hollow fang. Except for the family Uloboridae, the cribellate Orb Weavers, all spiders have venom glands and can inject the venom through openings in the tips of their fangs when biting
Spider bite
A spider bite is an injury resulting from the bites of spiders or other closely related arachnids.Spiders are active hunters and rely heavily on their bites to paralyze and kill their prey before consuming it. They also bite in self defense...
prey. The glands that produce this venom are located in the two segments of the chelicerae, and, in most spiders, extend beyond the chelicerae and into the cephalothorax.

The fang, the organic functional equivalent to a hypodermic needle
Hypodermic needle
A hypodermic needle is a hollow needle commonly used with a syringe to inject substances into the body or extract fluids from it...
is what penetrates the skin, fur, or exoskeleton of the spider's target—spider mouthparts are primarily intended for envenoming a spider's prey in most species, typically insect
Insect
Insects are a class of living creatures within the arthropods that have a chitinous exoskeleton, a three-part body , three pairs of jointed legs, compound eyes, and two antennae...
s and other small arthropod
Arthropod
An arthropod is an invertebrate animal having an exoskeleton , a segmented body, and jointed appendages. Arthropods are members of the phylum Arthropoda , and include the insects, arachnids, crustaceans, and others...
s. The basal portion includes all or part of the spider's venom glands, which can be squeezed to control the amount of venom forced out of the glands. Such control permits a spider to administer either a dry bite
Dry bite
A dry bite is a bite by a venomous animal in which no venom is released. Dry snake bites are called "Venomous snake bite without envenoming". Dry bites can occur from all snakes, but their frequency varies from species to species. For example, brown snakes can inflict dry bites 80% of the time...
, a dose appropriate to the nature of the prey or enemy, or a maximal dose. The control is also necessary for actions such as the spitting of venomous silk by members of the family Scytodidae
Spitting spider
Spitting spiders are members of the family Scytodidae. There are several genera, of which Scytodes is the best-known. Over 150 species of scytodids have been described worldwide....
; they depend on that mechanism both in hunting and defence. 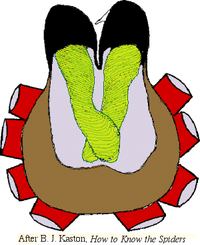 When a spider bites, the two parts of the chelicerae come together like a folding knife, and when making a threat display or actually preparing to bite, the spider will open the angle of the fangs with the basal portion of chelicerae and also open the angle of the basal portion with the cephalothorax. In the tarantulas and other Mygalomorphae
Mygalomorphae
The Mygalomorphae, , are an infraorder of spiders. The latter name comes from the orientation of the fangs which point straight down and do not cross each other .-Description:...
, the horizontal separation of the tips of the fangs does not change much, but in the other spiders the tips of the fangs move apart from each other as well as elevating. Even the tips of the fangs of the rather large spider shown above are quite sharp, and the spider's body is well adapted to driving the fangs into flesh. Some spider bites, such as those of the Sydney funnel-web spider
Sydney funnel-web spider
The Sydney funnel-web spider, Atrax robustus, is an Australian funnel-web spider usually found within a radius of Sydney, New South Wales, Australia.-Description:...
, are reported to have penetrated toenails and soft leather shoes.

The scissor chelicera is chelate and composed of two segments and occurs in the orders Pseudoscorpiones and Solifugae
Solifugae
Solifugae are an order of Arachnida, known as camel spiders, wind scorpions and sun spiders or solifuges, comprising more than 1,000 described species in about 153 genera...
.

This is the primitive condition and occurs in arachnids such as the Scorpiones and the Opiliones
Opiliones
Opiliones are an order of arachnids commonly known as harvestmen. , over 6,400 species of harvestmen have been discovered worldwide, although the real number of extant species may exceed 10,000. The order Opiliones can be divided into four suborders: Cyphophthalmi, Eupnoi, Dyspnoi and Laniatores...
. It also occurs in non-arachnid Chelicerata
Chelicerata
The subphylum Chelicerata constitutes one of the major subdivisions of the phylum Arthropoda, and includes horseshoe crabs, scorpions, spiders and mites...
such as the Xiphosura
Xiphosura
Xiphosura is an order of marine chelicerates which includes a large number of extinct lineages and only four recent species in the family Limulidae, which include the horseshoe crabs...
and Eurypterida. Arguably the chelifores of the Pycnogonida are homologous to the chelicerae and should be included in this count.
The source of this article is wikipedia, the free encyclopedia.  The text of this article is licensed under the GFDL.