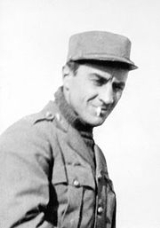 Encyclopedia
James Norman Hall was an American
United States
The United States of America is a federal constitutional republic comprising fifty states and a federal district...
author best known for the novel
Novel
A novel is a book of long narrative in literary prose. The genre has historical roots both in the fields of the medieval and early modern romance and in the tradition of the novella. The latter supplied the present generic term in the late 18th century....
Mutiny on the Bounty
Mutiny on the Bounty (novel)
For the actual event described in this book, see Mutiny on the Bounty.Mutiny on the Bounty is the title of the 1932 novel by Charles Nordhoff and James Norman Hall, based on the mutiny against Lieutenant William Bligh, commanding officer of the Bounty in 1789. It has been made into several films...
with co-author Charles Nordhoff
Charles Nordhoff
Charles Bernard Nordhoff was an English-born American novelist and traveler.-Early life:Charles Nordhoff was born in London, England, on February 1, 1887, to American parents. His father was Walter Nordhoff, a wealthy businessman and author of The Journey of the Flame penned under the name...
.

Hall was born in Colfax, Iowa
Colfax, Iowa
Colfax is a city in Jasper County, Iowa, United States. The town was founded in 1866, and was named for Schuyler Colfax, vice-president with U.S. Grant...
, where he attended the local schools. Hall graduated from Grinnell College
Grinnell College
Grinnell College is a private liberal arts college in Grinnell, Iowa, U.S. known for its strong tradition of social activism. It was founded in 1846, when a group of pioneer New England Congregationalists established the Trustees of Iowa College....
in 1910 and became a social worker in Boston, Massachusetts, while trying to establish himself as a writer and studying for a Master's degree from Harvard University
Harvard University
Harvard University is a private Ivy League university located in Cambridge, Massachusetts, United States, established in 1636 by the Massachusetts legislature. Harvard is the oldest institution of higher learning in the United States and the first corporation chartered in the country...
.

Hall was on vacation in the United Kingdom
United Kingdom
The United Kingdom of Great Britain and Northern IrelandIn the United Kingdom and Dependencies, other languages have been officially recognised as legitimate autochthonous languages under the European Charter for Regional or Minority Languages...
in the summer of 1914, when World War I
World War I
World War I , which was predominantly called the World War or the Great War from its occurrence until 1939, and the First World War or World War I thereafter, was a major war centred in Europe that began on 28 July 1914 and lasted until 11 November 1918...
began. Posing as a Canadian
Canada
Canada is a North American country consisting of ten provinces and three territories. Located in the northern part of the continent, it extends from the Atlantic Ocean in the east to the Pacific Ocean in the west, and northward into the Arctic Ocean...
, he enlisted in the British Army
British Army
The British Army is the land warfare branch of Her Majesty's Armed Forces in the United Kingdom. It came into being with the unification of the Kingdom of England and Scotland into the Kingdom of Great Britain in 1707. The new British Army incorporated Regiments that had already existed in England...
, serving in the Royal Fusiliers as a machine gun
Machine gun
A machine gun is a fully automatic mounted or portable firearm, usually designed to fire rounds in quick succession from an ammunition belt or large-capacity magazine, typically at a rate of several hundred rounds per minute....
ner during the Battle of Loos
Battle of Loos
The Battle of Loos was one of the major British offensives mounted on the Western Front in 1915 during World War I. It marked the first time the British used poison gas during the war, and is also famous for the fact that it witnessed the first large-scale use of 'new' or Kitchener's Army...
. He was discharged after his true nationality was discovered, and he returned to the United States and wrote his first book, Kitchener's Mob (1916), recounting his wartime experiences.

Returning to France
France
The French Republic , The French Republic , The French Republic , (commonly known as France , is a unitary semi-presidential republic in Western Europe with several overseas territories and islands located on other continents and in the Indian, Pacific, and Atlantic oceans. Metropolitan France...
, in 1916 Hall joined the Lafayette Escadrille
Lafayette Escadrille
The Lafayette Escadrille , was an escadrille of the French Air Service, the Aéronautique militaire, during World War I composed largely of American volunteer pilots flying fighters.-History:Dr. Edmund L...
, an American volunteer flying squadron in the French Air Force. During his time in the Escadrille, Hall was awarded the Croix de Guerre
Croix de guerre
The Croix de guerre is a military decoration of France. It was first created in 1915 and consists of a square-cross medal on two crossed swords, hanging from a ribbon with various degree pins. The decoration was awarded during World War I, again in World War II, and in other conflicts...
with five palms and the Médaille Militaire
Médaille militaire
The Médaille militaire is a decoration of the French Republic which was first instituted in 1852.-History:The creator of the médaille was the emperor Napoléon III, who may have taken his inspiration in a medal issued by his father, Louis Bonaparte, King of Holland...
. When the United States entered the war, Hall was made a Captain
Captain (USA)
In the uniformed services of the United States, captain is a federal commissioned officer rank.-U.S. Army, U.S. Air Force, and U.S. Marine Corps:...
in the Army Air Service
United States Army Air Service
The Air Service, United States Army was a forerunner of the United States Air Force during and after World War I. It was established as an independent but temporary wartime branch of the War Department by two executive orders of President Woodrow Wilson: on May 24, 1918, replacing the Aviation...
. There he met another American pilot, Charles Nordhoff
Charles Nordhoff
Charles Bernard Nordhoff was an English-born American novelist and traveler.-Early life:Charles Nordhoff was born in London, England, on February 1, 1887, to American parents. His father was Walter Nordhoff, a wealthy businessman and author of The Journey of the Flame penned under the name...
. After being shot down over enemy lines, Hall spent the last months of the war as a German
Germany
Germany , officially the Federal Republic of Germany , is a federal parliamentary republic in Europe. The country consists of 16 states while the capital and largest city is Berlin. Germany covers an area of 357,021 km2 and has a largely temperate seasonal climate...
prisoner of war
Prisoner of war
A prisoner of war or enemy prisoner of war is a person, whether civilian or combatant, who is held in custody by an enemy power during or immediately after an armed conflict...
. After being released, he was awarded the French Légion d’Honneur and the American Distinguished Service Cross
Distinguished Service Cross (United States)
The Distinguished Service Cross is the second highest military decoration that can be awarded to a member of the United States Army, for extreme gallantry and risk of life in actual combat with an armed enemy force. Actions that merit the Distinguished Service Cross must be of such a high degree...
.

After the war, Hall spent much of his life on the island of Tahiti
Tahiti
Tahiti is the largest island in the Windward group of French Polynesia, located in the archipelago of the Society Islands in the southern Pacific Ocean. It is the economic, cultural and political centre of French Polynesia. The island was formed from volcanic activity and is high and mountainous...
, where he and Nordhoff, who had also moved there, wrote a number of successful adventure books (including the Bounty trilogy). In addition to the various Bounty films, other film adaptations of his fiction include The Hurricane
The Hurricane (1937 film)
The Hurricane is a 1937 film set in the South Seas, directed by John Ford and produced by Samuel Goldwyn, about a Polynesian who is unjustly imprisoned. The climax features a special effects hurricane. It stars Dorothy Lamour and Jon Hall, with Mary Astor, C. Aubrey Smith, Thomas Mitchell, Raymond...
(1937), which starred his nephew Jon Hall
Jon Hall
Jon Hall was an American film actor.-Biography:Born Charles Felix Locher in Fresno, California, and raised in Tahiti by his father, the Swiss-born actor Felix Locher, he was a nephew of James Norman Hall, one of the authors of Mutiny on the Bounty...
; Passage to Marseille
Passage to Marseille
Passage to Marseille is a 1944 war film made by Warner Brothers, directed by Michael Curtiz and produced by Hal B. Wallis with Jack L. Warner as executive producer. The screenplay was by Casey Robinson and Jack Moffitt from the novel Sans Patrie by Charles Nordhoff and James Norman Hall...
(1944), featuring Humphrey Bogart
Humphrey Bogart
Humphrey DeForest Bogart was an American actor. He is widely regarded as a cultural icon.The American Film Institute ranked Bogart as the greatest male star in the history of American cinema....
; and Botany Bay
Botany Bay (film)
Botany Bay is a 1953 American drama film directed by John Farrow and starring Alan Ladd, James Mason and Patricia Medina. It was based on a novel of the same name by Charles Nordhoff and James Norman Hall.-Plot:...
(1953), with Alan Ladd
Alan Ladd
-Early life:Ladd was born in Hot Springs, Arkansas. He was the only child of Ina Raleigh Ladd and Alan Ladd, Sr. He was of English ancestry. His father died when he was four, and his mother relocated to Oklahoma City where she married Jim Beavers, a housepainter...
.

In 1925, Hall married Sarah (Lala) Winchester, who was part-Polynesian
Polynesian culture
Polynesian culture refers to the indigenous peoples' culture of Polynesia who share common traits in language, customs and society. Chronologically, the development of Polynesian culture can be divided into four different historical eras:...
. They had two children: the cinematographer
Cinematographer
A cinematographer is one photographing with a motion picture camera . The title is generally equivalent to director of photography , used to designate a chief over the camera and lighting crews working on a film, responsible for achieving artistic and technical decisions related to the image...
Conrad Hall
Conrad Hall
Conrad Lafcadio Hall, ASC was an American cinematographer from Papeete, Tahiti, French Polynesia. Named after writers Joseph Conrad and Lafcadio Hearn, he was best known for photographing films such as In Cold Blood, Cool Hand Luke, Butch Cassidy and the Sundance Kid, American Beauty, and Road to...
(1926–2003) and Nancy Hall-Rutgers (born 1930). Hall died in Tahiti and is buried on the hillside property just above the modest wooden house he and Lala lived in for many years.


The Bounty trilogy, with Charles Nordhoff