Encyclopedia
Jafar Sharif-Imami was an Iran
Iran
Iran , officially the Islamic Republic of Iran , is a country in Southern and Western Asia. The name "Iran" has been in use natively since the Sassanian era and came into use internationally in 1935, before which the country was known to the Western world as Persia...
ian politician who was Prime Minister
Prime Minister of Iran
Prime Minister of Iran was a political post in Iran that had existed during several different periods of time starting with the Qajar era until its most recent revival from 1979 to 1989 following the Iranian Revolution.-Prime Ministers of Qajar era:In the Qajar era, prime ministers were known by...
from 1960 to 1961 and again in 1978. He was a cabinet minister, president of the Iranian Senate, president of the Pahlavi Foundation, president of the Iran Chamber of Industries and Mines, and twice prime minister during the reign of Shah Mohammad Reza Pahlavi
Mohammad Reza Pahlavi
Mohammad Rezā Shāh Pahlavi, Shah of Iran, Shah of Persia , ruled Iran from 16 September 1941 until his overthrow by the Iranian Revolution on 11 February 1979...
. 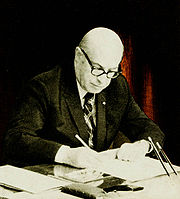 Sharif-Emami was Born in Tehran
Tehran
Tehran , sometimes spelled Teheran, is the capital of Iran and Tehran Province. With an estimated population of 8,429,807; it is also Iran's largest urban area and city, one of the largest cities in Western Asia, and is the world's 19th largest city.In the 20th century, Tehran was subject to...
on September 8, 1910 to a clerical family. After high school, Sharif-Emami was sent (along with thirty other young men) to Germany
Germany
Germany , officially the Federal Republic of Germany , is a federal parliamentary republic in Europe. The country consists of 16 states while the capital and largest city is Berlin. Germany covers an area of 357,021 km2 and has a largely temperate seasonal climate...
where he studied for eighteen months, returning to Iran in 1930 to work with State Railroad Organization until the Anglo-Soviet Invasion. Years later he was sent to Sweden
Sweden
Sweden , officially the Kingdom of Sweden , is a Nordic country on the Scandinavian Peninsula in Northern Europe. Sweden borders with Norway and Finland and is connected to Denmark by a bridge-tunnel across the Öresund....
for technical training, returning in 1939. Held in detention by the invaders.

Arrested in summer of 1943 for alleged ties to Germany he was kept in detention along with many other members of Iran's elite. After his release he was appointed director general of the Irrigation Agency. In June 1950, prime minister and General Haj-Ali Razmara appointed him acting minister and then minister of roads, his first cabinet post.

He served as a Minister in Manuchehr Eqbal's cabinet.
He became Prime Minister in 1960 and again in 1978 a few months before the overthrow of the Shah. He was appointed prime minister by Shah on August 27, 1978 because of his ties to clergy. During his short tenure, he undid many of the Shah's plans including the closing of casinos (owned by Pahlavi Foundation,which ironically he was the chairman for many years), abandoning the Imperial calendar, abolishing the Rastakhiz
Rastakhiz
Rastakhiz Party was founded on March 2, 1975 by Mohammad Reza Pahlavi, the Shah of Iran. The party was intended as Iran's new single party, holding a monopoly on political activity in Iran, and to which all Iranians were required to belong...
Party and allowing all political parties to be active. All of his efforts to reform the political system in Iran, was overshadowed by the Black Friday
Black Friday (1978)
Black Friday is the name given to September 8, 1978 and the shooting of protestors in Zhaleh Square in Tehran, Iran...
massacre in Jaleh Square (September 8, 1978), mass protests, martial law and nationwide strikes, which brought the country's economy to its knees. He resigned his post on November 6, 1978.

For some years he was also the Grand Master of the Grand Lodge of Iran, which gave him some informal influence among Iran's political elite.
He was notorious as one of the most corrupt officials in Shah's regime (nicknamed Mr. 5 Percent).
He died on June 16, 1998 in New York City
New York City
New York is the most populous city in the United States and the center of the New York Metropolitan Area, one of the most populous metropolitan areas in the world. New York exerts a significant impact upon global commerce, finance, media, art, fashion, research, technology, education, and...
.
The source of this article is wikipedia, the free encyclopedia.  The text of this article is licensed under the GFDL.