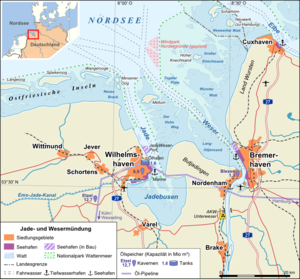 The Jade Bight, is a bay
Headlands and bays
Headlands and bays are two related features of the coastal environment.- Geology and geography :Headlands and bays are often found on the same coastline. A bay is surrounded by land on three sides, whereas a headland is surrounded by water on three sides. Headlands are characterized by high,...
on the North Sea
North Sea
In the southwest, beyond the Straits of Dover, the North Sea becomes the English Channel connecting to the Atlantic Ocean. In the east, it connects to the Baltic Sea via the Skagerrak and Kattegat, narrow straits that separate Denmark from Norway and Sweden respectively...
coast of Germany
Germany
Germany , officially the Federal Republic of Germany , is a federal parliamentary republic in Europe. The country consists of 16 states while the capital and largest city is Berlin. Germany covers an area of 357,021 km2 and has a largely temperate seasonal climate...
. It was formerly known simply as Jade or Jahde.

About 180 km² (70 mi²) in area, the Jade was largely created by storm floods during the 12th and 16th centuries. During this period it was connected in the East to the river Weser. This connection was closed between 1721 and 1725 by dikes reconnecting Butjadingen
Butjadingen
Butjadingen is a peninsula and municipality in the Wesermarsch districts, in Lower Saxony, Germany.-Geography:Butjadingen is situated on the German North Sea coast. It is bordered on the west and southwest by the Jade River and on the east by the Weser River. It forms the northern part of the...
to the mainland as a peninsula
Peninsula
A peninsula is a piece of land that is bordered by water on three sides but connected to mainland. In many Germanic and Celtic languages and also in Baltic, Slavic and Hungarian, peninsulas are called "half-islands"....
.

In the West the Jade extended far into the Frisian peninsula
East Frisia
East Frisia or Eastern Friesland is a coastal region in the northwest of the German federal state of Lower Saxony....
. From the early sixteenth century a number of dikes were built against the storm floods and to arable land. The main dike, Ellenser Damm, was built between 1596 and 1615 based on an agreement between the principalities of East Frisia and Oldenburg
Oldenburg (state)
Oldenburg — named after its capital, the town of Oldenburg — was a state in the north of present-day Germany. Oldenburg survived from 1180 until 1918 as a county, duchy and grand duchy, and from 1918 until 1946 as a free state. It was located near the mouth of the River Weser...
.

During World War I
World War I
World War I , which was predominantly called the World War or the Great War from its occurrence until 1939, and the First World War or World War I thereafter, was a major war centred in Europe that began on 28 July 1914 and lasted until 11 November 1918...
, the German High Seas Fleet
High Seas Fleet
The High Seas Fleet was the battle fleet of the German Empire and saw action during World War I. The formation was created in February 1907, when the Home Fleet was renamed as the High Seas Fleet. Admiral Alfred von Tirpitz was the architect of the fleet; he envisioned a force powerful enough to...
(Hochseeflotte), the main battle fleet of the Imperial German Navy (Kaiserliche Marine
Kaiserliche Marine
The Imperial German Navy was the German Navy created at the time of the formation of the German Empire. It existed between 1871 and 1919, growing out of the small Prussian Navy and Norddeutsche Bundesmarine, which primarily had the mission of coastal defense. Kaiser Wilhelm II greatly expanded...
), was based at Wilhelmshaven in the Jade Bight.