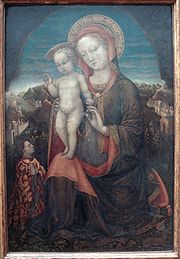 Jacopo Bellini was an Italian
Italy
Italy , officially the Italian Republic languages]] under the European Charter for Regional or Minority Languages. In each of these, Italy's official name is as follows:;;;;;;;;), is a unitary parliamentary republic in South-Central Europe. To the north it borders France, Switzerland, Austria and...
painter. Jacopo was one of the founders of the Renaissance style
Early Renaissance painting
Renaissance art is the painting, sculpture and decorative arts of that period of European history known as the Renaissance, emerging as a distinct style in Italy in about 1400, in parallel with developments which occurred in philosophy, literature, music and science...
of painting in Venice
Venice
Venice is a city in northern Italy which is renowned for the beauty of its setting, its architecture and its artworks. It is the capital of the Veneto region...
and northern Italy. His sons Gentile
Gentile Bellini
Gentile Bellini was an Italian painter. From 1474 he was the official portrait artist for the Doges of Venice.- Biography :...
and Giovanni Bellini
Giovanni Bellini
Giovanni Bellini was an Italian Renaissance painter, probably the best known of the Bellini family of Venetian painters. His father was Jacopo Bellini, his brother was Gentile Bellini, and his brother-in-law was Andrea Mantegna. He is considered to have revolutionized Venetian painting, moving it...
, and his son-in-law Andrea Mantegna
Andrea Mantegna
Andrea Mantegna was an Italian painter, a student of Roman archeology, and son in law of Jacopo Bellini. Like other artists of the time, Mantegna experimented with perspective, e.g., by lowering the horizon in order to create a sense of greater monumentality...
, were also famous painters. 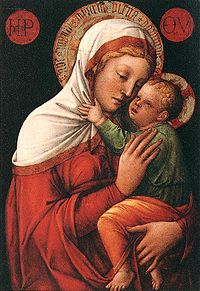 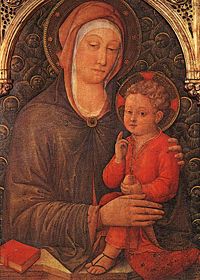 Born in Venice
Venice
Venice is a city in northern Italy which is renowned for the beauty of its setting, its architecture and its artworks. It is the capital of the Veneto region...
, Jacopo had been a pupil of Gentile da Fabriano
Gentile da Fabriano
Gentile da Fabriano was an Italian painter known for his participation in the International Gothic style. He worked in various places in central Italy, mostly in Tuscany. His best known works are his Adoration of the Magi and the Flight into Egypt.-Biography:Gentile was born in or near Fabriano,...
. In 1411–1412 he was in Foligno
Foligno
Foligno is an ancient town of Italy in the province of Perugia in east central Umbria, on the Topino river where it leaves the Apennines and enters the wide plain of the Clitunno river system...
, where with Gentile he worked at the Palazzo Trinci
Palazzo Trinci
The Trinci Palace is a patrician residence in the center of Foligno, central Italy. It houses an archaeological museum, the city's picture gallery, a multimedia museum of Tournaments and Jousts and the Civic Museum.- History :...
frescoes. In 1423 Bellini was in Florence
Florence
Florence is the capital city of the Italian region of Tuscany and of the province of Florence. It is the most populous city in Tuscany, with approximately 370,000 inhabitants, expanding to over 1.5 million in the metropolitan area....
, where he knew the new works by Brunelleschi
Filippo Brunelleschi
Filippo Brunelleschi was one of the foremost architects and engineers of the Italian Renaissance. He is perhaps most famous for inventing linear perspective and designing the dome of the Florence Cathedral, but his accomplishments also included bronze artwork, architecture , mathematics,...
, Donatello
Donatello
Donato di Niccolò di Betto Bardi , also known as Donatello, was an early Renaissance Italian artist and sculptor from Florence...
, Masolino da Panicale
Masolino da Panicale
Masolino da Panicale was an Italian painter. His best known works are probably his collaborations with Masaccio: Madonna with Child and St. Anne and the frescoes in the Brancacci Chapel .-Biography:Masolino was born in Panicale...
and Masaccio
Masaccio
Masaccio , born Tommaso di Ser Giovanni di Simone, was the first great painter of the Quattrocento period of the Italian Renaissance. According to Vasari, Masaccio was the best painter of his generation because of his skill at recreating lifelike figures and movements as well as a convincing sense...
.
In 1424 he opened a workshop in Venice, which he ran right up until his death.

Many of his greatest works, including the enormous Crucifixion in the cathedral of Verona
Verona
Verona ; German Bern, Dietrichsbern or Welschbern) is a city in the Veneto, northern Italy, with approx. 265,000 inhabitants and one of the seven chef-lieus of the region. It is the second largest city municipality in the region and the third of North-Eastern Italy. The metropolitan area of Verona...
(1436), have disappeared. From c. 1430 is the panel with Madonna and Child, in the Accademia Carrara
Accademia Carrara
The Accademia Carrara is an art gallery and an academy of fine arts in Bergamo, Italy.-History:The origins of the art gallery lie with the Count Giacomo Carrara, a wealthy collector and patron of the arts, who left a generous legacy to the city of Bergamo at the end of the 18th century.After the...
, once attributed to Gentile da Fabriano. In 1441, at Ferrara
Ferrara
Ferrara is a city and comune in Emilia-Romagna, northern Italy, capital city of the Province of Ferrara. It is situated 50 km north-northeast of Bologna, on the Po di Volano, a branch channel of the main stream of the Po River, located 5 km north...
, where he was at the service of Leonello d'Este
Leonello d'Este
thumb|220px|Leonello D'Este portrayed by Pisanello.Leonello d'Este was marquis of Ferrara and Duke of Modena and Reggio Emilia from 1441 to 1450.-Biography:...
together with Leon Battista Alberti, he executed a portrait of that Marquess, now lost. Of this period the Madonna dell'Umiltà, probably commissioned by one of the brothers of Leonello.

The influence from Masolino da Panicale
Masolino da Panicale
Masolino da Panicale was an Italian painter. His best known works are probably his collaborations with Masaccio: Madonna with Child and St. Anne and the frescoes in the Brancacci Chapel .-Biography:Masolino was born in Panicale...
towards more modern, early Renaissance
Renaissance
The Renaissance was a cultural movement that spanned roughly the 14th to the 17th century, beginning in Italy in the Late Middle Ages and later spreading to the rest of Europe. The term is also used more loosely to refer to the historical era, but since the changes of the Renaissance were not...
themes is visible in the Madonna with Child (dated 1448) in the Pinacoteca di Brera: for the first time, perspective is present and the figure are more monumental. Later he contributed with works now lost to the Venetian churches of San Giovanni Evangelista (1452) and St. Mark (1466). From 1459 is a Madonna with Blessing Child in the Gallerie dell'Accademia.

Later he sojourned in Padua
Padua
Padua is a city and comune in the Veneto, northern Italy. It is the capital of the province of Padua and the economic and communications hub of the area. Padua's population is 212,500 . The city is sometimes included, with Venice and Treviso, in the Padua-Treviso-Venice Metropolitan Area, having...
, where he trained a young Andrea Mantegna
Andrea Mantegna
Andrea Mantegna was an Italian painter, a student of Roman archeology, and son in law of Jacopo Bellini. Like other artists of the time, Mantegna experimented with perspective, e.g., by lowering the horizon in order to create a sense of greater monumentality...
in perspective and classicist themes and where, in 1460, he finished a portrait of Erasmo Gattamelata, now lost. Of his late phase, a ruined Crucifix in the Museum of Verona and an Annunciation in Sant'Alessandro of Brescia
Brescia
Brescia is a city and comune in the region of Lombardy in northern Italy. It is situated at the foot of the Alps, between the Mella and the Naviglio, with a population of around 197,000. It is the second largest city in Lombardy, after the capital, Milan...
remain.

Few of his paintings still exist, but his surviving sketch-books (one in the British Museum
British Museum
The British Museum is a museum of human history and culture in London. Its collections, which number more than seven million objects, are amongst the largest and most comprehensive in the world and originate from all continents, illustrating and documenting the story of human culture from its...
and one in the Louvre
Louvre
The Musée du Louvre – in English, the Louvre Museum or simply the Louvre – is one of the world's largest museums, the most visited art museum in the world and a historic monument. A central landmark of Paris, it is located on the Right Bank of the Seine in the 1st arrondissement...
) show an interest in landscape and elaborate architectural design and are his most important legacy. His surviving works show how he accommodated linear perspective to the decorative patterns and rich colors of Venetian painting