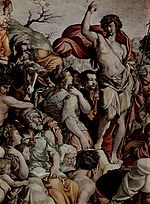 Jacopino del Conte was an Italian
Italy
Italy , officially the Italian Republic languages]] under the European Charter for Regional or Minority Languages. In each of these, Italy's official name is as follows:;;;;;;;;), is a unitary parliamentary republic in South-Central Europe. To the north it borders France, Switzerland, Austria and...
Mannerist painter, active in both Rome
Rome
Rome is the capital of Italy and the country's largest and most populated city and comune, with over 2.7 million residents in . The city is located in the central-western portion of the Italian Peninsula, on the Tiber River within the Lazio region of Italy.Rome's history spans two and a half...
and Florence
Florence
Florence is the capital city of the Italian region of Tuscany and of the province of Florence. It is the most populous city in Tuscany, with approximately 370,000 inhabitants, expanding to over 1.5 million in the metropolitan area....
.

A native of Florence, Jacopino del Conte was born the same year as another Florentine master Cecchino del Salviati (whom Conte outlived by 35 years) and, like Salviati and a number of other painters, he initially apprenticed with the influential painter and draftsman Andrea del Sarto
Andrea del Sarto
Andrea del Sarto was an Italian painter from Florence, whose career flourished during the High Renaissance and early Mannerism. Though highly regarded during his lifetime as an artist senza errori , his renown was eclipsed after his death by that of his contemporaries, Leonardo da Vinci,...
.

Conte's first frescoes, including Annunciation to Zachariah (1536), Preaching of Saint John the Baptist (1538), and Baptism of Christ (1541) were in the Florentine-supported Oratory
Oratory (worship)
An oratory is a Christian room for prayer, from the Latin orare, to pray.-Catholic church:In the Roman Catholic Church, an oratory is a structure other than a parish church, set aside by ecclesiastical authority for prayer and the celebration of Mass...
of San Giovanni Decollato
San Giovanni dei Fiorentini
San Giovanni dei Fiorentini, St John of the Florentines, is a church in the Ponte rione or district of Rome. Dedicated to St John the Baptist, the protector of Florence, the new church for the Florentine community in Rome was started in the 16th century and completed in early eighteenth and is the...
, located in Rome. The Preaching fresco was based on a drawing by Perin del Vaga
Perin del Vaga
Perino del Vaga was an Italian painter of the Late Renaissance/Mannerism.-Biography:...
. In 1547–48, in collaboration with Siciolante da Sermoneta
Girolamo Siciolante da Sermoneta
Girolamo Siciolante da Sermoneta was an Italian Mannerist painter active in Rome in the mid 16th century.Native to Sermoneta, he was reputed to have been a pupil of Leonardo da Pistoia. His first known work is an altarpiece once in the Valvisciolo Abbey, now in Palazzo Caetani in Rome. In...
, Conte completed the fresco decoration of the chapel of San Remigio in San Luigi dei Francesi
San Luigi dei Francesi
The Church of St. Louis of the French is a Roman Catholic minor basilica and titular church in Rome, not far from Piazza Navona. The church is dedicated to the Virgin Mary, to St. Denis the Areopagite and St. Louis IX, king of France...
. In 1552, he painted another work for the San Giovanni Decollato Oratory, the altarpiece Deposition, whose designs are sometimes attributed to Daniele da Volterra
Daniele da Volterra
Daniele Ricciarelli , better known as Daniele da Volterra, was an Italian mannerist painter and sculptor.He is best remembered for his association, for better or worse, with the late Michelangelo. Several of Daniele's most important works were based on designs made for that purpose by Michelangelo...
.

Although the specific dates of his birth and death were not documented, in his final year Jacopino del Conte would have been 88 years old.