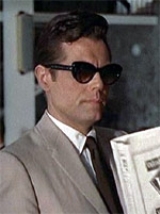 Overview
John Joseph Patrick Ryan (December 30, 1920 – January 21, 1998), best known by his stage name
Stage name
A stage name, also called a showbiz name or screen name, is a pseudonym used by performers and entertainers such as actors, wrestlers, comedians, and musicians.-Motivation to use a stage name:...
Jack Lord, was an American television, film, and Broadway actor. He was known for his starring role as Steve McGarrett in the American television program Hawaii Five-O
Hawaii Five-O
Hawaii Five-O is an American police procedural drama series produced by CBS Productions and Leonard Freeman. Set in Hawaii, the show originally aired for twelve seasons from 1968 to 1980, and continues in reruns. The show featured a fictional state police unit run by Detective Steve McGarrett,...
from 1968 to 1980. Lord appeared in feature films earlier in his career, among them Man of the West
Man of the West
Man of the West is a 1958 western film starring Gary Cooper and directed by Anthony Mann in his last film in the genre. The screenplay, written by Reginald Rose, is based on the novel The Border Jumpers by Will C...
(1958). He was the first actor to play recurring character Felix Leiter
Felix Leiter
Felix Leiter is a fictional CIA agent created by Ian Fleming in the James Bond series of novels and films. In both, Leiter works for the CIA and assists Bond in his various adventures as well as being his best friend. In further novels Leiter joins the Pinkerton Detective Agency and in the film...
, in Dr. No
Dr. No (film)
Dr. No is a 1962 spy film, starring Sean Connery; it is the first James Bond film. Based on the 1958 Ian Fleming novel of the same name, it was adapted by Richard Maibaum, Johanna Harwood, and Berkely Mather and was directed by Terence Young. The film was produced by Harry Saltzman and Albert R...
, the first James Bond
James Bond
James Bond, code name 007, is a fictional character created in 1953 by writer Ian Fleming, who featured him in twelve novels and two short story collections. There have been a six other authors who wrote authorised Bond novels or novelizations after Fleming's death in 1964: Kingsley Amis,...
film.
Born in Brooklyn, New York
Brooklyn
Brooklyn is the most populous of New York City's five boroughs, with nearly 2.6 million residents, and the second-largest in area. Since 1896, Brooklyn has had the same boundaries as Kings County, which is now the most populous county in New York State and the second-most densely populated...
, Lord was the son of Irish-American parents.

I've noticed in most of the Hawaii Five-O episodes that when McGarrett is out in a casual setting either running, swimming at the beach, working on hi...
More

For Bumblybee-response to jack Lord's being gay

Was Jack Lord just shy around women, or was he gay or bi-sexual? I know he had a short marriage, and a very long one to Marie that lasted until his de...
More
x