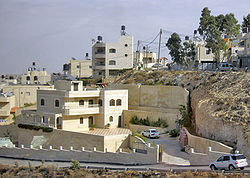 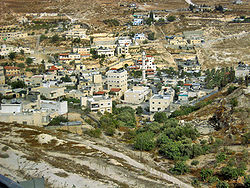 Jabel Mukaber is a predominantly Arab
Arab
Arab people, also known as Arabs , are a panethnicity primarily living in the Arab world, which is located in Western Asia and North Africa. They are identified as such on one or more of genealogical, linguistic, or cultural grounds, with tribal affiliations, and intra-tribal relationships playing...
neighborhood in southern East Jerusalem
East Jerusalem
East Jerusalem or Eastern Jerusalem refer to the parts of Jerusalem captured and annexed by Jordan in the 1948 Arab-Israeli War and then captured and annexed by Israel in the 1967 Six-Day War...
. It is bordered by Armon HaNetziv to the west, Abu Tor
Abu Tor
Abu Tor is a mixed Jewish and Arab neighborhood in central Jerusalem, Israel, south of the Old City. Abu Tor is bounded by the Valley of Hinnom on the north, Hebron Road and the old Jerusalem Railway Station to the west, and the Sherover Promenade, Armon HaNetziv and Peace Forest to the south...
and Silwan
Silwan
Silwan or Wadi Hilweh is a predominantly Palestinian village adjacent to the Old City of Jerusalem. In recent years a small Jewish minority of 40 families has settled in the area. The village is located in East Jerusalem, an area occupied by Jordan from 1948 until the 1967 Six-day War and by Israel...
to the north and Sur Baher
Sur Baher
Sur Baher is an Arab neighborhood on the southeastern outskirts of Jerusalem. It is located southeast of Talpiot and north of the Har Homa neighborhood, down the hill from Kibbutz Ramat Rachel...
to the south. Jabel Mukaber has a population of 14,000.

According to local legend, Jabel Mukaber is named after Umar ibn al-Khattab
Umar
`Umar ibn al-Khattāb c. 2 November , was a leading companion and adviser to the Islamic prophet Muhammad who later became the second Muslim Caliph after Muhammad's death....
, a disciple of Muhammad
Muhammad
Muhammad |ligature]] at U+FDF4 ;Arabic pronunciation varies regionally; the first vowel ranges from ~~; the second and the last vowel: ~~~. There are dialects which have no stress. In Egypt, it is pronounced not in religious contexts...
and the second caliph
Caliph
The Caliph is the head of state in a Caliphate, and the title for the ruler of the Islamic Ummah, an Islamic community ruled by the Shari'ah. It is a transcribed version of the Arabic word   which means "successor" or "representative"...
of the Islamic Caliphate, who cried Allahu Akbar at this site. During the British Mandate, the offices of the British High Commissioner, the representative of British imperial rule
British Empire
The British Empire comprised the dominions, colonies, protectorates, mandates and other territories ruled or administered by the United Kingdom. It originated with the overseas colonies and trading posts established by England in the late 16th and early 17th centuries. At its height, it was the...
in Palestine
Palestine
Palestine is a conventional name, among others, used to describe the geographic region between the Mediterranean Sea and the Jordan River, and various adjoining lands....
were located in Jabel Mukaber. During the 1948 Arab-Israeli War
1948 Arab-Israeli War
The 1948 Arab–Israeli War, known to Israelis as the War of Independence or War of Liberation The war commenced after the termination of the British Mandate for Palestine and the creation of an independent Israel at midnight on 14 May 1948 when, following a period of civil war, Arab armies invaded...
, the Egyptian Muslim Brotherhood battled Jewish forces in the neighborhood. Jabel Mukaber and other Arab neighborhoods in East Jerusalem were captured and annexed by Jordan
Jordan
Jordan , officially the Hashemite Kingdom of Jordan , Al-Mamlaka al-Urduniyya al-Hashemiyya) is a kingdom on the East Bank of the River Jordan. The country borders Saudi Arabia to the east and south-east, Iraq to the north-east, Syria to the north and the West Bank and Israel to the west, sharing...
. Since the 1967 war
Six-Day War
The Six-Day War , also known as the June War, 1967 Arab-Israeli War, or Third Arab-Israeli War, was fought between June 5 and 10, 1967, by Israel and the neighboring states of Egypt , Jordan, and Syria...
, Jabel Mukaber has been under the jurisdiction of the Jerusalem municipality.

Many residents of Jabel Mukaber rejected Israeli citizenship to demonstrate their solidarity with Palestinians in the West Bank
West Bank
The West Bank ) of the Jordan River is the landlocked geographical eastern part of the Palestinian territories located in Western Asia. To the west, north, and south, the West Bank shares borders with the state of Israel. To the east, across the Jordan River, lies the Hashemite Kingdom of Jordan...
, but they are considered permanent residents. As holders of blue identity cards, they have wide freedom of movement within Israel, and have access to health care, unemployment and other benefits.

The construction of the Israeli West Bank barrier
Israeli West Bank barrier
The Israeli West Bank barrier is a separation barrier being constructed by the State of Israel along and within the West Bank. Upon completion, the barrier’s total length will be approximately...
has divided Jabel Mukaber in half and left some neighborhood residents on the West Bank
West Bank
The West Bank ) of the Jordan River is the landlocked geographical eastern part of the Palestinian territories located in Western Asia. To the west, north, and south, the West Bank shares borders with the state of Israel. To the east, across the Jordan River, lies the Hashemite Kingdom of Jordan...
side of the wall, meaning that they hold orange IDs instead of blue IDs, and cannot cross into Israel itself. Running through the centre of the neighbourhood, the barrier often separates members of the same family from one another, interrupting normal family life. Jabel Mukaber is under-budgeted for municipal services, leading to sewage blockages in parts of the neighborhood and a shortage of classrooms.

Armon HaNetziv was established in 1970 in close proximity to Jabel Mukaber during the upswing of building that followed the Six-Day War. When the intifada began, the mood changed. Since then, Jabel Mukaber has been the scene of numerous demonstrations, protests and riots in support of the Palestinian cause.

Two residents of Jabel Mukaber were convicted for transporting a suicide bomber from Bethlehem
Bethlehem
Bethlehem is a Palestinian city in the central West Bank of the Jordan River, near Israel and approximately south of Jerusalem, with a population of about 30,000 people. It is the capital of the Bethlehem Governorate of the Palestinian National Authority and a hub of Palestinian culture and tourism...
who perpetrated the Pat Junction Bus Bombing in 2002, killing 19 people and wounding over 74. In 2006, a Jabel Mukaber resident opened fire on Israeli policemen
Israel Police
The Israel Police is the civilian police force of Israel. As with most other police forces in the world, its duties include crime fighting, traffic control, maintaining public safety, and counter-terrorism...
and security guards injuring one of them before he was shot dead. The perpetrator of the 2008 Mercaz HaRav massacre
Mercaz HaRav massacre
The Mercaz HaRav massacre, also called the Mercaz HaRav shooting, was an attack that occurred on 6 March 2008, in which a lone Palestinian gunman shot multiple students at the Mercaz HaRav yeshiva, a religious school in Jerusalem, Israel, after which the gunman himself was shot dead. Eight students...
, Alaa Abu Dhein, was from Jabel Mukaber. Following the attack, in which eight high school students were killed, the residents of Jabel Mukaber erected a mourners' tent for him. Israeli protesters tried to break through police barricades outside Jabel Mukaber, resulting in the arrest of 13 protesters. In 2008, a Jabel Mukaber resident rammed a group of Israelis with his car.

Jabel Mukaber, like other Arab neighborhoods in East Jerusalem lying outside of the Old City, could become part of the capital of a proposed Palestinian state
Proposals for a Palestinian state
Proposals for a Palestinian state currently refers to the proposed establishment of an independent state for the Palestinian people in Palestine on land that was occupied by Israel since the Six-Day War of 1967 and before by Egypt and by Jordan since 1949...
, although Jabel Mukaber has been branded a hotbed of terrorism
Terrorism
Terrorism is the systematic use of terror, especially as a means of coercion. In the international community, however, terrorism has no universally agreed, legally binding, criminal law definition...
due to militant activity and support for terrorism among some of residents.

A Tolerance Monument
Tolerance Monument
The Tolerance Monument is an outdoor sculpture located in a park near Goldman Promenade in Jerusalem, Israel. The monument was designed by Polish sculptor Czesław Dźwigaj, known for his religious art, in collaboration with sculptor Michal Kubiak...
sculpted by Czesław Dźwigaj in collaboration with Michal Kubiak is situated on a hill marking the divide between Jewish Armon HaNetziv and Arab Jabel Mukaber, standing opposite the United Nations
United Nations
The United Nations is an international organization whose stated aims are facilitating cooperation in international law, international security, economic development, social progress, human rights, and achievement of world peace...
headquarters in Jerusalem in a park near Goldman Promenade. Unveiled in Jerusalem in 2008, it was funded by Polish
Poles
thumb|right|180px|The state flag of [[Poland]] as used by Polish government and diplomatic authoritiesThe Polish people, or Poles , are a nation indigenous to Poland. They are united by the Polish language, which belongs to the historical Lechitic subgroup of West Slavic languages of Central Europe...
businessman Aleksander Gudzowaty
Aleksander Gudzowaty
Aleksander Gudzowaty is a Polish businessman and economist, one of the most richest Polish people.- Biography :...
as a symbol to promote peace in the Israeli-Palestinian conflict
Israeli-Palestinian conflict
The Israeli–Palestinian conflict is the ongoing conflict between Israelis and Palestinians. The conflict is wide-ranging, and the term is also used in reference to the earlier phases of the same conflict, between Jewish and Zionist yishuv and the Arab population living in Palestine under Ottoman or...
.
The source of this article is wikipedia, the free encyclopedia.  The text of this article is licensed under the GFDL.