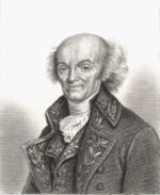 Encyclopedia
Joseph Jérôme Lefrançois de Lalande (July 11, 1732 – April 4, 1807) was a French
France
The French Republic , The French Republic , The French Republic , (commonly known as France , is a unitary semi-presidential republic in Western Europe with several overseas territories and islands located on other continents and in the Indian, Pacific, and Atlantic oceans. Metropolitan France...
astronomer
Astronomer
An astronomer is a scientist who studies celestial bodies such as planets, stars and galaxies.Historically, astronomy was more concerned with the classification and description of phenomena in the sky, while astrophysics attempted to explain these phenomena and the differences between them using...
and writer.

Lalande was born at Bourg-en-Bresse
Bourg-en-Bresse
Bourg-en-Bresse is a commune in eastern France, capital of the Ain department, and was capital of the former province of Bresse . It is located north-northeast of Lyon.The inhabitants of Bourg-en-Bresse are known as Burgiens.-Geography:...
(now in the département of Ain
Ain
Ain is a department named after the Ain River on the eastern edge of France. Being part of the region Rhône-Alpes and bordered by the rivers Saône and Rhône, the department of Ain enjoys a privileged geographic situation...
). His parents sent him to Paris
Paris
Paris is the capital and largest city in France, situated on the river Seine, in northern France, at the heart of the Île-de-France region...
to study law
Law
Law is a system of rules and guidelines which are enforced through social institutions to govern behavior, wherever possible. It shapes politics, economics and society in numerous ways and serves as a social mediator of relations between people. Contract law regulates everything from buying a bus...
, but as a result of lodging in the Hôtel Cluny, where Delisle
Joseph-Nicolas Delisle
Joseph-Nicolas Delisle was a French astronomer.-Life:He was one of the 11 sons of Claude Delisle . Like many of his brothers, among them Guillaume Delisle, he initially followed classical studies. Soon however, he moved to astronomy under the supervision of Joseph Lieutaud and Jacques Cassini...
had his observatory, he was drawn to astronomy, and became the zealous and favoured pupil of both Delisle and Pierre Charles Le Monnier
Pierre Charles Le Monnier
Pierre Charles Le Monnier was a French astronomer. His name is sometimes given as Lemonnier.-Biography:...
. Having completed his legal studies, he was about to return to Bourg to practise as an advocate, when Lemonnier obtained permission to send him to Berlin
Berlin
Berlin is the capital city of Germany and is one of the 16 states of Germany. With a population of 3.45 million people, Berlin is Germany's largest city. It is the second most populous city proper and the seventh most populous urban area in the European Union...
, to make observations on the lunar parallax
Parallax
Parallax is a displacement or difference in the apparent position of an object viewed along two different lines of sight, and is measured by the angle or semi-angle of inclination between those two lines. The term is derived from the Greek παράλλαξις , meaning "alteration"...
in concert with those of Lacaille
Nicolas Louis de Lacaille
Abbé Nicolas Louis de Lacaille was a French astronomer.He is noted for his catalogue of nearly 10,000 southern stars, including 42 nebulous objects. This catalogue, called Coelum Australe Stelliferum, was published posthumously in 1763. It introduced 14 new constellations which have since become...
at the Cape of Good Hope
Cape of Good Hope
The Cape of Good Hope is a rocky headland on the Atlantic coast of the Cape Peninsula, South Africa.There is a misconception that the Cape of Good Hope is the southern tip of Africa, because it was once believed to be the dividing point between the Atlantic and Indian Oceans. In fact, the...
.
The successful execution of this task obtained for him, before he was twenty-one, admission to the Academy of Berlin, as well as his election as an adjunct astronomer to the French Academy of Sciences
French Academy of Sciences
The French Academy of Sciences is a learned society, founded in 1666 by Louis XIV at the suggestion of Jean-Baptiste Colbert, to encourage and protect the spirit of French scientific research...
. He now devoted himself to the improvement of the planetary theory, publishing in 1759 corrected edition of Edmond Halley
Edmond Halley
Edmond Halley FRS was an English astronomer, geophysicist, mathematician, meteorologist, and physicist who is best known for computing the orbit of the eponymous Halley's Comet. He was the second Astronomer Royal in Britain, following in the footsteps of John Flamsteed.-Biography and career:Halley...
's tables, with a history of Halley's Comet whose return in that year he had helped Alexis Clairaut to calculate. In 1762 Delisle resigned the chair of astronomy in the Collège de France in Lalande's favour. The duties were discharged by Lalande for forty-six years. His house became an astronomical seminary, and amongst his pupils were Delambre, Giuseppe Piazzi
Giuseppe Piazzi
Giuseppe Piazzi was an Italian Catholic priest of the Theatine order, mathematician, and astronomer. He was born in Ponte in Valtellina, and died in Naples. He established an observatory at Palermo, now the Osservatorio Astronomico di Palermo – Giuseppe S...
, Pierre Méchain
Pierre Méchain
Pierre François André Méchain was a French astronomer and surveyor who, with Charles Messier, was a major contributor to the early study of deep sky objects and comets.-Life:...
, and his own nephew Michel Lalande. By his publications in connection with the transit of Venus
Transit of Venus
A transit of Venus across the Sun takes place when the planet Venus passes directly between the Sun and Earth, becoming visible against the solar disk. During a transit, Venus can be seen from Earth as a small black disk moving across the face of the Sun...
of 1769 he won great fame. However, his difficult personality lost him some popularity.

Although his investigations were conducted with diligence rather than genius, Lalande's career was an eminent one. As a lecturer and writer he helped popularise astronomy. His planetary tables, into which he introduced corrections for mutual perturbations, were the best available up to the end of the 18th century. In 1801 he endowed the Lalande Prize
Lalande Prize
The Lalande Prize was an award for scientific advances in astronomy, given from 1802 through 1970 by the French Academy of Sciences.The prize was named for, and endowed by, astronomer Jérôme Lalande in 1801...
, administered by the French Academy of Sciences
French Academy of Sciences
The French Academy of Sciences is a learned society, founded in 1666 by Louis XIV at the suggestion of Jean-Baptiste Colbert, to encourage and protect the spirit of French scientific research...
, for advances in astronomy.
Pierre-Antoine Véron
Pierre-Antoine Véron
Pierre-Antoine Véron was a French expert astronomer and mathematician. He was was a disciple of astronomer and writer Jérôme Lalande at the Collège Royal. Véron is famous for having made a historical observation of the size of the Pacific Ocean...
, the young astronomer who for the first time in history determined the size of the Pacific Ocean
Pacific Ocean
The Pacific Ocean is the largest of the Earth's oceanic divisions. It extends from the Arctic in the north to the Southern Ocean in the south, bounded by Asia and Australia in the west, and the Americas in the east.At 165.2 million square kilometres in area, this largest division of the World...
from east to west, was Lalande's disciple.


Near discovery of Neptune

In February 1847 Sears C. Walker of the U.S. Naval Observatory was searching historical records and surveys for possible prediscovery sightings of the planet Neptune
Neptune
Neptune is the eighth and farthest planet from the Sun in the Solar System. Named for the Roman god of the sea, it is the fourth-largest planet by diameter and the third largest by mass. Neptune is 17 times the mass of Earth and is slightly more massive than its near-twin Uranus, which is 15 times...
that had been discovered the year before. He found that observations made by Lalande's staff in 1795 were in the direction of Neptune's position in the sky at that time and that Neptune might appear in the observation records. On May 8 and again on May 10 of 1795 a star was observed and recorded with uncertainty noted on its position with a colon, this notation could also indicate an observing error so it was not until the original records of the observatory were reviewed that it was established with certainty that the object was Neptune and the position error between the two nights was due to the planet's motion across the sky. The discovery of these records of Neptune's position in 1795 lead to a better calculation of the planet's orbit.

He communicated more than one hundred and fifty papers to the French Academy of Sciences
French Academy of Sciences
The French Academy of Sciences is a learned society, founded in 1666 by Louis XIV at the suggestion of Jean-Baptiste Colbert, to encourage and protect the spirit of French scientific research...
, edited the Connoissance de temps (1759–1774), and again (1794–1807), and wrote the concluding two volumes of the 2nd edition of Montucla
Jean-Étienne Montucla
Jean-Étienne Montucla was a French mathematician.-Biography:Montucla was born at Lyon.In 1754 he published an anonymous treatise entitled Histoire des récherches sur la quadrature du cercle, and in 1758 the first part of his great work, Histoire des mathématiques, the first history of mathematics...
's Histoire des mathématiques (1802).
The source of this article is wikipedia, the free encyclopedia.  The text of this article is licensed under the GFDL.