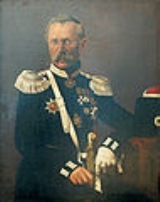 Encyclopedia
Ivan Ivanovich Krasnov was a Russian general and author.

He was born in 1802, son to the general
General
A general officer is an officer of high military rank, usually in the army, and in some nations, the air force. The term is widely used by many nations of the world, and when a country uses a different term, there is an equivalent title given....
Ivan Kuzmich Krasnov (1752–1812), fellow-fighter of Alexander Suvorov
Alexander Suvorov
Alexander Vasilyevich Suvorov , Count Suvorov of Rymnik, Prince in Italy, Count of the Holy Roman Empire , was the fourth and last generalissimo of the Russian Empire.One of the few great generals in history who never lost a battle along with the likes of Alexander...
and Matvey Platov. Ivan Ivanovich Krasnov was educated at the boarding-school by Kharkov University. He began military service in 1816 at the Life Guards of the Cossacks Regiment. Three years later, he was promoted to the rank of aide-de-camp
Aide-de-camp
An aide-de-camp is a personal assistant, secretary, or adjutant to a person of high rank, usually a senior military officer or a head of state...
to Vasily Orlov-Denisov
Vasily Orlov-Denisov
Vasily Orlov-Denisov was a Cossack Russian general. He was the son of Vasily Petrovich Orlov, Ataman of the Don Cossacks, and grandson of the first Earl of the Cossacks, General of Cavalry, Fedor Petrovich Denisov . In honour of his grandfather he added his surname to his own, becoming...
, commander of the 2nd Cavalry Corps. He participated at the Russo-Turkish War, 1828–1829, and subdued the Polish rebels during the November Uprising
November Uprising
The November Uprising , Polish–Russian War 1830–31 also known as the Cadet Revolution, was an armed rebellion in the heartland of partitioned Poland against the Russian Empire. The uprising began on 29 November 1830 in Warsaw when the young Polish officers from the local Army of the Congress...
in 1831. Afterwards, he returned home to the Don Voisko Province
Don Voisko Province
Don Voisko Province of Imperial Russia was the official name of the territory of Don Cossacks, roughly coinciding with today's Rostov Oblast of Russia. Its center was Cherkassk, later Novocherkassk....
.

In 1838, Ivan Krasnov was elected the director of the board of the Don Cossack Voisko and assistant to the Ataman
Ataman
Ataman was a commander title of the Ukrainian People's Army, Cossack, and haidamak leaders, who were in essence the Cossacks...
for civil affairs. In 1841–1842 he served as Cossack field chieftain of Don Cossack Voisko regiments in the Caucasus
Caucasus
The Caucasus, also Caucas or Caucasia , is a geopolitical region at the border of Europe and Asia, and situated between the Black and the Caspian sea...
and wrote the book Notes on the War in Caucasus (Записки о кавказской войне). In 1843–1848 he commanded the Life Guards of the Cossacks regiment. During Crimean War
Crimean War
The Crimean War was a conflict fought between the Russian Empire and an alliance of the French Empire, the British Empire, the Ottoman Empire, and the Kingdom of Sardinia. The war was part of a long-running contest between the major European powers for influence over territories of the declining...
Krasnov served in the rank of field chieftain (ataman) of Don Cossack Voisko regiments within the Crimean Army, and organized the defense of the city of Taganrog
Taganrog
Taganrog is a seaport city in Rostov Oblast, Russia, located on the north shore of Taganrog Bay , several kilometers west of the mouth of the Don River. Population: -History of Taganrog:...
during the Siege of Taganrog
Siege of Taganrog
The Siege of Taganrog during the Crimean War was a series of military actions designed to allow the British and the French access to Rostov-on-Don, which was an important city for Russian military operations in the Caucasus.-Prelude:...
in 1855. In 1856 he was appointed general of the 4th military district of Don Voisko.

After the end of Crimean War, Ivan Ivanovich Krasnov returned to his social activities. He regularly published several articles in Don Voisko News (Донские Войсковые Ведомости), Military Review (Военный сборник) and other periodicals. His most important articles dedicated to Don Voisko are:

The most interesting work in terms of historical importance would be his Notes of the War in Caucasus, providing materials on the history of the Life Guards of the Cossack regiment. Ivan I. Krasnov started his literary activity with poems, such as Quiet Flows the Don, Prince Vasil'ko and more.