A Israel Defense Forces checkpoint, usually called an Israeli checkpoint , is a barrier erected by the Israel Defense Forces
Israel Defense Forces
The Israel Defense Forces , commonly known in Israel by the Hebrew acronym Tzahal , are the military forces of the State of Israel. They consist of the ground forces, air force and navy. It is the sole military wing of the Israeli security forces, and has no civilian jurisdiction within Israel...
with the stated aim of enhancing the security of Israel
Israel
The State of Israel is a parliamentary republic located in the Middle East, along the eastern shore of the Mediterranean Sea...
and Israeli settlement
Israeli settlement
An Israeli settlement is a Jewish civilian community built on land that was captured by Israel from Jordan, Egypt, and Syria during the 1967 Six-Day War and is considered occupied territory by the international community. Such settlements currently exist in the West Bank...
s and preventing those who wish to do harm from crossing. Most of the checkpoints in the West Bank
West Bank
The West Bank ) of the Jordan River is the landlocked geographical eastern part of the Palestinian territories located in Western Asia. To the west, north, and south, the West Bank shares borders with the state of Israel. To the east, across the Jordan River, lies the Hashemite Kingdom of Jordan...
are not located on the boundary between Israel and the occupied Palestinian territory, but rather throughout the West Bank. 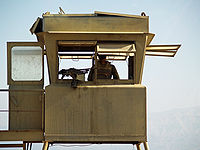 The IDF has stated that during 2008, it has removed the crossing joins, 140 roadblocks and eight central checkpoints, in an effort to improve freedom of movement for the civilian Palestinian population. As of December 2010, Israeli authorities report that 27 out of 41 manned checkpoints, and more than 200 unmanned roadblocks- more than a third of the total roadblocks- have been removed.

According to program director Col. Triber Bezalel, the IDF employs humanitarian officers at various checkpoints, which are responsible to make life easier for those who cross the borders and aid the elderly and sick.

Many Palestinian
Palestinian people
The Palestinian people, also referred to as Palestinians or Palestinian Arabs , are an Arabic-speaking people with origins in Palestine. Despite various wars and exoduses, roughly one third of the world's Palestinian population continues to reside in the area encompassing the West Bank, the Gaza...
residents of the West Bank, claim that despite the checkpoints' intended use, in practice they violate Palestinians' rights to transportation and other human rights
Human rights
Human rights are "commonly understood as inalienable fundamental rights to which a person is inherently entitled simply because she or he is a human being." Human rights are thus conceived as universal and egalitarian . These rights may exist as natural rights or as legal rights, in both national...
. Palestinian complaints of abuse
Abuse
Abuse is the improper usage or treatment for a bad purpose, often to unfairly or improperly gain benefit. Abuse can come in many forms, such as: physical or verbal maltreatment, injury, sexual assault, violation, rape, unjust practices; wrongful practice or custom; offense; crime, or otherwise...
and humiliation
Humiliation
Humiliation is the abasement of pride, which creates mortification or leads to a state of being humbled or reduced to lowliness or submission. It can be brought about through bullying, intimidation, physical or mental mistreatment or trickery, or by embarrassment if a person is revealed to have...
are common: Israel Defense Forces' Judge Advocate General
Military Advocate General
The Military Advocate General assists the Israel Defense Forces in imposing rules of conduct through legal advice, legal instruction, maintaining the mechanisms for military prosecution and legal defense, and fulfilling special legal tasks...
, Maj. Gen. Dr. Menachem Finkelstein, states that "there were many—too many—complaints that soldiers manning checkpoints abuse and humiliate Palestinians and that the large number of complaints 'lit a red light' for him". Hundreds of Israeli women have monitored the checkpoints as part of Machsom (Checkpoint) Watch
Machsom Watch
Machsom Watch, or Checkpoint Watch is a group of Israeli women who monitor checkpoints in the West Bank and the military courts, out of opposition to the Israeli occupation...
. The organization circulated daily reports on the checkpoints and published a book of testimonies that co-founder and author Yehudit Kirstein-Keshet says demonstrates "Israel's imprisonment of an entire population in a web of closures and checkpoints." Kirstein-Keshet also reports, "We Watchers … have witnessed the daily humiliation and abuse, the despair and impotence of Palestinians at checkpoints."

The United Nations
United Nations
The United Nations is an international organization whose stated aims are facilitating cooperation in international law, international security, economic development, social progress, human rights, and achievement of world peace...
, in its February 2009 Humanitarian Monitor report, has stated that it is becoming "apparent" that the checkpoint and obstacles, which Israeli authorities justified from the beginning of the second Intifada (September 2000) as a temporary military response to violent confrontations and attacks on Israeli civilians, is evolving into "a more permanent system of control" that is steadily reducing the space available for Palestinian growth and movement for the benefit of the increasing Israeli settler population.

According to the Palestinian Environmental NGOs Network
Palestinian Environmental NGOs Network
The Palestinian Environmental NGOs Network is a non-profit, non-governmental organization with a mandate to protect the environment of Palestine by acting as a coordinating body for Palestinian environmental organizations located in the West Bank and Gaza Strip...
member Applied Research Institute—Jerusalem (ARIJ), the Israeli military established 121 flying checkpoints in the West Bank
West Bank
The West Bank ) of the Jordan River is the landlocked geographical eastern part of the Palestinian territories located in Western Asia. To the west, north, and south, the West Bank shares borders with the state of Israel. To the east, across the Jordan River, lies the Hashemite Kingdom of Jordan...
and East Jerusalem
East Jerusalem
East Jerusalem or Eastern Jerusalem refer to the parts of Jerusalem captured and annexed by Jordan in the 1948 Arab-Israeli War and then captured and annexed by Israel in the 1967 Six-Day War...
between October 2006 until April 2007. Their study claimed that most of the flying checkpoint
Random checkpoint
A random checkpoint is a military and police tactic involving the set up of a hasty roadblock primarily by mobile truck-mounted infantry or police units in order to disrupt unauthorized or unwanted movement and/or military activity.Random checkpoints are set up to achieve surprise, as opposed to...
s were located in the northern part of the West Bank; in particular, the Nablus Governorate
Nablus Governorate
The Nablus Governorate is an administrative district of the Palestinian National Authoritylocated in the Central Highlands of the West Bank, 53km north of Jerusalem. It covers the area around the city of Nablus which serves as the muhfaza of the governorate...
, Tubas Governorate
Tubas Governorate
The Tubas Governorate is an administrative district of the Palestinian National Authority in the northeastern West Bank. It district capital or muhfaza is the city of Tubas. In 2007, the population was 50,267.-Village councils:*Bardala*Ein al-Beida...
and Jenin Governorate
Jenin Governorate
The Jenin Governorate is one of a number of Governorates of the West Bank and Gaza Strip within the Palestinian Territories, it covers the northern extremity of the West Bank including the area around the city of Jenin....
and that Palestinians attempting to cross flying checkpoints could wait anywhere between 20 and 90 minutes, and in some cases, longer.

According to Israeli Human Rights group B'Tselem
B'Tselem
B'Tselem is an Israeli non-governmental organization . It calls itself "The Israeli Information Center for Human Rights in the Occupied Territories"...
, from 2000 to 2009 there have been 72 Palestinians deaths related to delays receiving medical care at checkpoints.

Medical vehicles might be stopped and are not immune to searches by Israeli soldiers at flying checkpoints. For example, in March 2002, an explosive device
Explosive device
An explosive device is device that relies on the exothermic reaction of an explosive material to provide an extremely sudden and violent release of energy. Explosive devices have applications as demolition devices and as weapons in the military....
was found in a Palestine Red Crescent Society
Palestine Red Crescent Society
The Palestine Red Crescent Society was founded in 1968, by Fathi Arafat, Yassar Arafat's brother. It is a humanitarian organization that part of the International Red Cross and Red Crescent Movement. It provides hospitals, emergency medicine and ambulance services, and primary health care centers...
(PRCS) ambulance. The Red Crescent expressed shock at the incident, and began an internal investigation. On January 11, 2004, a PRCS ambulance not carrying patients was stopped and searched at a flying checkpoint near the village of Jit
Jit, Qalqilya
Jit is a Palestinian town in the northern West Bank, located 10 kilometers west of Nablus. According to the Palestinian Central Bureau of Statistics, the village had a population of approximately 2,320 inhabitants in 2006....
. The ambulance was escorted by military jeep to the Qadomin bus station where after 10 minutes the ambulance crew got their IDs back and were allowed to continue working. In another case, on the same day, an ambulance transporting a diabetic patient to the hospital in Tulkarm
Tulkarm
Tulkarem or Tulkarm is a Palestinian city in the northern Samarian mountain range in the Tulkarm Governorate in the extreme northwestern West Bank adjacent to the Netanya and Haifa districts to the west, the Nablus and Jenin Districts to the east...
was stopped, searched, and allowed to proceed after the companion of the patient was arrested.

Some checkpoints between Palestinian towns in the West Bank require permits for Palestinians to cross them and exceptions are not always made for medical emergencies. In 2008, an Israeli soldier in command of a checkpoint outside Nablus
Nablus
Nablus is a Palestinian city in the northern West Bank, approximately north of Jerusalem, with a population of 126,132. Located in a strategic position between Mount Ebal and Mount Gerizim, it is the capital of the Nablus Governorate and a Palestinian commercial and cultural center.Founded by the...
was relieved from duty and imprisoned for two weeks after he refused to allow a Palestinian woman in labour to pass through. The woman gave birth to a stillborn baby at the checkpoint. In contrast, a small number of Palestinian diplomats and other individuals are given VIP
Very Important Person
A Very Important Person, or VIP is a person who is accorded special privileges due to his or her status or importance.Examples include celebrities, heads of state/heads of government, major employers, high rollers, politicians, high-level corporate officers, wealthy individuals, or any other...
cards by the Israeli army that effectively allow the carriers free passage through checkpoints.