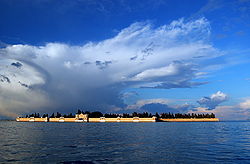 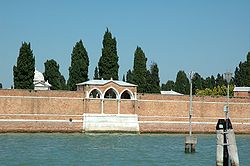 San Michele is an island in the Venetian Lagoon
Venetian Lagoon
The Venetian Lagoon is the enclosed bay of the Adriatic Sea in which the city of Venice is situated. Its name in the Venetian language, Laguna Veneta— cognate of Latin lacus, "lake"— has provided the international name for an enclosed, shallow embayment of saltwater, a lagoon.The Venetian Lagoon...
, northern Italy
Italy
Italy , officially the Italian Republic languages]] under the European Charter for Regional or Minority Languages. In each of these, Italy's official name is as follows:;;;;;;;;), is a unitary parliamentary republic in South-Central Europe. To the north it borders France, Switzerland, Austria and...
.
Originally a prison
Prison
A prison is a place in which people are physically confined and, usually, deprived of a range of personal freedoms. Imprisonment or incarceration is a legal penalty that may be imposed by the state for the commission of a crime...
island, Napoleon's occupying forces decreed that Venetians could not bury their deceased on any of the main Venetians islands, but only on San Michele. It is associated with the sestiere of Cannaregio
Cannaregio
Cannaregio is the northernmost of the six historic sestieri of Venice. It is the second largest sestiere by land area and the largest by population, with 13,169 people as of 2007....
, from which it lies a short distance north east.

Along with neighbouring San Cristoforo della Pace, the island was a popular place for local travellers and fishermen to land. Mauro Codussi
Mauro Codussi
Mauro Codussi was an Italian architect of the early-Renaissance, active mostly in Venice. The name can also be spelt Coducci. He was one of the first to bring the classical syle of the early renaissance to Venice to replace the prevalent Gothic style.Born near Bergamo about 1440, he is first...
's Chiesa di San Michele in Isola of 1469, the first Renaissance
Renaissance
The Renaissance was a cultural movement that spanned roughly the 14th to the 17th century, beginning in Italy in the Late Middle Ages and later spreading to the rest of Europe. The term is also used more loosely to refer to the historical era, but since the changes of the Renaissance were not...
church in Venice, and a monastery lie on the island.

San Cristoforo was selected to become a cemetery in 1807, designed by Gian Antonio Selva
Gian Antonio Selva
Gian Antonio Selva was an Italian neoclassical architect.-Biography:He was born in Venice. His works include Villa Manfrin detta Margherita a Sant'Artemio, near Treviso Gian Antonio Selva (2 September 1751 - 22 January 1819) was an Italian neoclassical architect.-Biography:He was born in...
, when under French occupation it was decreed that burial on the mainland was unsanitary. The canal that separated the two islands was filled in during 1836, and subsequently the larger island became known as San Michele. Bodies were carried to the island on special funeral gondola
Gondola
The gondola is a traditional, flat-bottomed Venetian rowing boat, well suited to the conditions of the Venetian Lagoon. For centuries gondolas were the chief means of transportation and most common watercraft within Venice. In modern times the iconic boats still have a role in public transport in...
s, including Igor Stravinsky
Igor Stravinsky
Igor Fyodorovich Stravinsky ; 6 April 1971) was a Russian, later naturalized French, and then naturalized American composer, pianist, and conductor....
, Joseph Brodsky
Joseph Brodsky
Iosif Aleksandrovich Brodsky , was a Russian poet and essayist.In 1964, 23-year-old Brodsky was arrested and charged with the crime of "social parasitism" He was expelled from the Soviet Union in 1972 and settled in America with the help of W. H. Auden and other supporters...
, Jean Schlumberger
Jean Schlumberger (jewelry designer)
Jean Michel Schlumberger was a French jewelry designer especially well-known for his work at Tiffany & Co.-Early life:...
, Frederick Rolfe
Frederick Rolfe
Frederick William Rolfe, better known as Baron Corvo, and also calling himself 'Frederick William Serafino Austin Lewis Mary Rolfe', , was an English writer, artist, photographer and eccentric...
, Horatio Brown
Horatio Brown
Horatio Robert Forbes Brown was a Scottish historian who specialized in the history of Venice and Italy.Born in Nice, he grew up in Midlothian, Scotland, was educated in England at Clifton and Oxford, and spent most of his life in Venice, publishing several books about the city...
, Sergei Diaghilev
Sergei Diaghilev
Sergei Pavlovich Diaghilev , usually referred to outside of Russia as Serge, was a Russian art critic, patron, ballet impresario and founder of the Ballets Russes, from which many famous dancers and choreographers would arise.-Early life and career:...
, Ezra Pound
Ezra Pound
Ezra Weston Loomis Pound was an American expatriate poet and critic and a major figure in the early modernist movement in poetry...
, Luigi Nono
Luigi Nono
Luigi Nono was an Italian avant-garde composer of classical music and remains one of the most prominent composers of the 20th century.- Early years :Born in Venice, he was a member of a wealthy artistic family, and his grandfather was a notable painter...
, Franco Basaglia
Franco Basaglia
Franco Basaglia was an Italian psychiatrist and neurologist, professor who proposed the dismantling of psychiatric hospitals, pioneer of the modern concept of mental health, Italian psychiatry reformer, charismatic leader in Italian psychiatry, figurehead and founder of Democratic...
and Zoran Mušič
Zoran Mušic
Zoran Mušič was a Slovenian painter. He spent half of his life living and working in Italy.-Life:Zoran Mušič was born in a Slovene-speaking family in Bukovica, a village in the Vipava Valley near Gorizia, in what was then the Austrian County of Gorizia and Gradisca...
. Other attractions include the Cappella Emiliana chapel. The cemetery is still in use today.