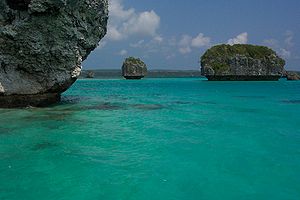 The Isle of Pines is an island located in the Pacific Ocean
Pacific Ocean
The Pacific Ocean is the largest of the Earth's oceanic divisions. It extends from the Arctic in the north to the Southern Ocean in the south, bounded by Asia and Australia in the west, and the Americas in the east.At 165.2 million square kilometres in area, this largest division of the World...
, in the archipelago
Archipelago
An archipelago , sometimes called an island group, is a chain or cluster of islands. The word archipelago is derived from the Greek ἄρχι- – arkhi- and πέλαγος – pélagos through the Italian arcipelago...
of New Caledonia
New Caledonia
New Caledonia is a special collectivity of France located in the southwest Pacific Ocean, east of Australia and about from Metropolitan France. The archipelago, part of the Melanesia subregion, includes the main island of Grande Terre, the Loyalty Islands, the Belep archipelago, the Isle of...
, an overseas territory of France
France
The French Republic , The French Republic , The French Republic , (commonly known as France , is a unitary semi-presidential republic in Western Europe with several overseas territories and islands located on other continents and in the Indian, Pacific, and Atlantic oceans. Metropolitan France...
. The island is part of the commune (municipality) of L'Île-des-Pins
L'Île-des-Pins
L'Île-des-Pins is a commune in the South Province of New Caledonia, an overseas territory of France in the Pacific Ocean. L'Île-des-Pins is made up of the Isle of Pines, the smaller Kôtomo Island, and several islets around these two, as well as the distant island of Walpole, which is located almost...
, in the South Province
South Province, New Caledonia
The South Province is one of three administrative subdivisions in New Caledonia. It corresponds to the southern and southwestern portion of the New Caledonian mainland. It is by far the most economically developed and most urbanized part of the archipelago and indeed in the entire Melanesian region...
of New Caledonia. The Isle of Pines is nicknamed l'île la plus proche du paradis ("the closest island to Paradise"). It has snorkeling and scuba diving in and around its lagoon. Species of tropical fish and corals can be seen in the transparent water.

The island was discovered by Westerners by Captain James Cook
James Cook
Captain James Cook, FRS, RN was a British explorer, navigator and cartographer who ultimately rose to the rank of captain in the Royal Navy...
in 1774 on his second voyage to New Zealand
New Zealand
New Zealand is an island country in the south-western Pacific Ocean comprising two main landmasses and numerous smaller islands. The country is situated some east of Australia across the Tasman Sea, and roughly south of the Pacific island nations of New Caledonia, Fiji, and Tonga...
. Cook gave the island its name after seeing the tall native pines (Araucaria columnaris
Araucaria columnaris
Araucaria columnaris, the Coral reef araucaria, is a unique species of conifer in the Araucariaceae family. It is endemic to New Caledonia in the southwestern Pacific....
). He never disembarked onto the island, but as he saw signs of inhabitance (smoke) assumed it was inhabited. In the 1840s Protestant
Protestantism
Protestantism is one of the three major groupings within Christianity. It is a movement that began in Germany in the early 16th century as a reaction against medieval Roman Catholic doctrines and practices, especially in regards to salvation, justification, and ecclesiology.The doctrines of the...
and Catholic
Catholic
The word catholic comes from the Greek phrase , meaning "on the whole," "according to the whole" or "in general", and is a combination of the Greek words meaning "about" and meaning "whole"...
missionaries arrived, along with merchants seeking sandalwood.

The French
France
The French Republic , The French Republic , The French Republic , (commonly known as France , is a unitary semi-presidential republic in Western Europe with several overseas territories and islands located on other continents and in the Indian, Pacific, and Atlantic oceans. Metropolitan France...
took possession of the island in 1853 at which time the native Kunies opted for the Catholic religion. In 1872 the island became a French penal colony
Penal colony
A penal colony is a settlement used to exile prisoners and separate them from the general populace by placing them in a remote location, often an island or distant colonial territory...
, home to 3,000 political deportees from the Paris Commune
Paris Commune
The Paris Commune was a government that briefly ruled Paris from March 18 to May 28, 1871. It existed before the split between anarchists and Marxists had taken place, and it is hailed by both groups as the first assumption of power by the working class during the Industrial Revolution...
.


Where is Isle of Pines?

Known as Kunie to its Melanesian inhabitants, the island is part of the French-Pacific territory, New Caledonia. Situated at the southern tip of this archipelago, it sits almost astride the Tropic of Capricorn at 167¼ longitude and 22¼ latitude south. Pacific map

The name, Isle of Pines, was bestowed by Captain James Cook, the intrepid English explorer, in 1774, when on his second voyage to New Zealand.

The island lies a hundred kilometres south-east of the New Caledonian capital, Noumea. This bustling, nickel-smelting city of approximately 100,000 inhabitants is 1,900 km from Sydney (or two and a half hours’ flight) and approximately the same distance from Auckland, New Zealand. Paris is more than 16,000 km or 24 hours’ flight away.