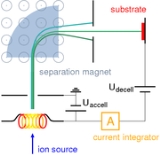 Encyclopedia
Ion Beam Deposition is a process of applying materials to a target through the application of an ion beam
Ion beam
An ion beam is a type of charged particle beam consisting of ions. Ion beams have many uses in electronics manufacturing and other industries. A variety of ion beam sources exist, some derived from the mercury vapor thrusters developed by NASA in the 1960s.-Ion beam etching or sputtering:One type...
. 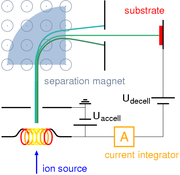 An ion beam deposition apparatus typically consists of an ion source, ion optics and the deposition target. Optionally a mass analyzer can be incorporated.

The ions are then accelerated, focused or deflected using high voltages or magnetic fields. Optional deceleration at the substrate can be employed to define the deposition energy. This energy usually ranges from a few eV
Electronvolt
In physics, the electron volt is a unit of energy equal to approximately joule . By definition, it is equal to the amount of kinetic energy gained by a single unbound electron when it accelerates through an electric potential difference of one volt...
up to a few keV. At low energy molecular ion beams are deposited intact (soft landing
Soft landing
A soft landing in the business cycle is the process of an economy shifting from growth to slow-growth to potentially flat, as it approaches but avoids a recession. It is usually caused by government attempts to slow down inflation...
) At a high deposition energy a molecular ion fragments, while atomic ions penetrate further into the material, a process known as ion implantation
Ion implantation
Ion implantation is a materials engineering process by which ions of a material are accelerated in an electrical field and impacted into another solid. This process is used to change the physical, chemical, or electrical properties of the solid...
.

Ion optics such as radio frequency quadrupoles can be mass selective. In IBD they are used to select a single, or a range of ion species for deposition in order to avoid contamination. In particular for organic materials, this process is often monitored by a mass spectrometer.
The ion beam current, which is quantitative measure for the deposited amount of material, can be monitored during the deposition process. Switching of the selected mass range can be used to define a stoichiometry
Stoichiometry
Stoichiometry is a branch of chemistry that deals with the relative quantities of reactants and products in chemical reactions. In a balanced chemical reaction, the relations among quantities of reactants and products typically form a ratio of whole numbers...
.