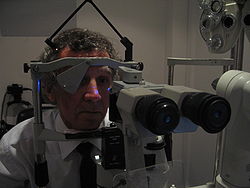 Intraocular pressure is the fluid pressure
Pressure
Pressure is the force per unit area applied in a direction perpendicular to the surface of an object. Gauge pressure is the pressure relative to the local atmospheric or ambient pressure.- Definition :...
inside the eye
Human eye
The human eye is an organ which reacts to light for several purposes. As a conscious sense organ, the eye allows vision. Rod and cone cells in the retina allow conscious light perception and vision including color differentiation and the perception of depth...
. Tonometry is the method eye care professional
Eye care professional
An eye care professional is an individual who provides a service related to the eyes or vision. It is a general term that can refer to any healthcare worker involved in eye care, from one with a small amount of post-secondary training to practitioners with a doctoral level of education.-Current...
s use to determine this. IOP is an important aspect in the evaluation of patients at risk from glaucoma
Glaucoma
Glaucoma is an eye disorder in which the optic nerve suffers damage, permanently damaging vision in the affected eye and progressing to complete blindness if untreated. It is often, but not always, associated with increased pressure of the fluid in the eye...
. Most tonometers are calibrated to measure pressure in millimeters of mercury (mmHg).

An important quantitative relationship is provided below:

Intraocular pressure is measured with a tonometer as part of a comprehensive eye examination
Eye examination
An eye examination is a battery of tests performed by an ophthalmologist, optometrist, or orthoptist assessing vision and ability to focus on and discern objects, as well as other tests and examinations pertaining to the eyes....
.

Measured values of intraocular pressure are influenced by corneal
Cornea
The cornea is the transparent front part of the eye that covers the iris, pupil, and anterior chamber. Together with the lens, the cornea refracts light, with the cornea accounting for approximately two-thirds of the eye's total optical power. In humans, the refractive power of the cornea is...
thickness and rigidity. As a result, some forms of refractive surgery
Refractive surgery
Refractive eye surgery is any eye surgery used to improve the refractive state of the eye and decrease or eliminate dependency on glasses or contact lenses. This can include various methods of surgical remodeling of the cornea or cataract surgery. The most common methods today use excimer lasers to...
(such as photorefractive keratectomy
Photorefractive keratectomy
Photorefractive keratectomy and Laser-Assisted Sub-Epithelial Keratectomy are laser eye surgery procedures intended to correct a person's vision, reducing dependency on glasses or contact lenses. The first PRK procedure was performed in 1987 by Dr. Theo Seiler, then at the Free University...
) can cause traditional intraocular pressure measurements to appear normal when in fact the pressure may be abnormally high.

Ocular hypertension
Ocular hypertension
Ocular hypertension is intraocular pressure higher than normal in the absence of optic nerve damage or visual field loss.Current consensus in ophthalmology defines normal introcular pressure as that between 10 mmHg and 21 mmHg...
(OHT) is defined by intraocular pressure being higher than normal, in the absence of optic nerve
Optic nerve
The optic nerve, also called cranial nerve 2, transmits visual information from the retina to the brain. Derived from the embryonic retinal ganglion cell, a diverticulum located in the diencephalon, the optic nerve doesn't regenerate after transection.-Anatomy:The optic nerve is the second of...
damage or visual field
Visual field
The term visual field is sometimes used as a synonym to field of view, though they do not designate the same thing. The visual field is the "spatial array of visual sensations available to observation in introspectionist psychological experiments", while 'field of view' "refers to the physical...
loss.

Intraocular pressure varies throughout the night and day. The diurnal variation for normal eyes is between 3 and 6 mmHg and the variation may increase in glaucomatous eyes. During the night, intraocular pressure usually decreases due to the slower production of aqueous humour. In the general population, IOP ranges between 10 and 21 mm Hg with a mean of about 15 or 16 mm Hg (plus or minus 3.5 mm Hg during a 24-hour cycle).

Ocular hypertension is the most important risk factor for glaucoma
Glaucoma
Glaucoma is an eye disorder in which the optic nerve suffers damage, permanently damaging vision in the affected eye and progressing to complete blindness if untreated. It is often, but not always, associated with increased pressure of the fluid in the eye...
.

Differences in pressure between the two eyes is often clinically significant, and potentially associated with certain types of glaucoma, as well as iritis
Iritis
Iritis is a form of anterior uveitis and refers to the inflammation of the iris of the eye.-Types:There are two main types of iritis: acute and chronic. They differ in numerous ways....
or retinal detachment
Retinal detachment
Retinal detachment is a disorder of the eye in which the retina peels away from its underlying layer of support tissue. Initial detachment may be localized, but without rapid treatment the entire retina may detach, leading to vision loss and blindness. It is a medical emergency.The retina is a...
.

Intraocular pressure may become elevated due to anatomical problems, inflammation
Inflammation
Inflammation is part of the complex biological response of vascular tissues to harmful stimuli, such as pathogens, damaged cells, or irritants. Inflammation is a protective attempt by the organism to remove the injurious stimuli and to initiate the healing process...
of the eye, genetic factors, or as a side-effect
Adverse effect (medicine)
In medicine, an adverse effect is a harmful and undesired effect resulting from a medication or other intervention such as surgery.An adverse effect may be termed a "side effect", when judged to be secondary to a main or therapeutic effect. If it results from an unsuitable or incorrect dosage or...
from medication
Medication
A pharmaceutical drug, also referred to as medicine, medication or medicament, can be loosely defined as any chemical substance intended for use in the medical diagnosis, cure, treatment, or prevention of disease.- Classification :...
. Intraocular pressure usually increases with age and is genetically influenced.

Additional intraocular pressure measurements are continuing to be recorded at a rate of up to 100 per day and this case history web site is updated regularly. The size of the data set and the frequency with which measurements are recorded may lead to additional insights into intraocular pressure changes in response to a diverse number of factors. One interesting recent discussion that arose directly from data mining the large data set involved the timing of using glaucoma eye drop medications.