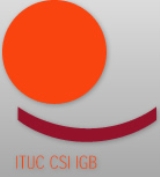 The founding congress of the ITUC was held on 1-3 November 2006 in Vienna, Austria.

Day two included Pascal Lamy
Pascal Lamy
Pascal Lamy is the Director-General of the World Trade Organization, a French political advisor, a businessman, and a former European Commissioner for Trade...
, the Director-General of the World Trade Organization
World Trade Organization
The World Trade Organization is an organization that intends to supervise and liberalize international trade. The organization officially commenced on January 1, 1995 under the Marrakech Agreement, replacing the General Agreement on Tariffs and Trade , which commenced in 1948...
(WTO) responding to panel discussions on the impact of globalization
Globalization
Globalization refers to the increasingly global relationships of culture, people and economic activity. Most often, it refers to economics: the global distribution of the production of goods and services, through reduction of barriers to international trade such as tariffs, export fees, and import...
, including the topics "Cohesion and chaos - the global institutions" and "Global unions - global companies". Technical difficulties limited Lamy's satellite video link participation.

Leadership and officers were elected on the final day of the congress. Guy Ryder, the former general secretary of the ICFTU, was elected to the same position in the new organization. Sharan Burrow
Sharan Burrow
Sharan Burrow is the General Secretary of the International Trade Union Confederation and a former President of the Australian Council of Trade Unions...
was elected president. A Governing Council was established, with 70 elected members, and 8 additional seats reserved for youth and women’s representatives.

A Council of Global Unions was also formed on the final day of the congress. It was established jointly with the Global Union Federations and the Trade Union Advisory Committee to the OECD (TUAC).


"The Council will enable us to mobilize global membership around political and strategic initiatives and actions in order to confront global forces that work against the interests of working people and families," − Guy Ryder.

Speaking to the Congress after her election, Burrow paid tribute to her predecessor and emphasised the continuing role of organised labour in the world's emergence from the Global Financial Crisis. She also made special mention of the significance of her election as the first female leader of the world's largest trade union (against a background of high workforce participation by women and a Congress 50% of whose delegates were women):


"I am a warrior for woman and we still have work to ensure the inclusion of women in the work place and in our unions. The struggles for women are multiple – too often within their families for independence, then in the workplace for rights and equal opportunity, in their unions for access and representation and then as union leaders. But the investment in and participation of women is not only a moral mandate it is an investment in democracy and a bulwark against fundamentalism and oppression. Organising woman is and must continue to be a priority for the ITUC." − Sharan Burrow.