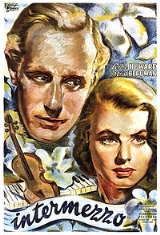 Encyclopedia
Intermezzo (1939
1939 in film
The year 1939 in motion pictures can be justified as being called the most outstanding one ever, when it comes to the high quality and high attendance at the large set of the best films that premiered in the year .- Events :Motion picture historians and film often rate...
) is a romantic film made in the USA by Selznick International Pictures
Selznick International Pictures
-Origin:It was founded in 1935 by producer David O. Selznick and investor John Hay "Jock" Whitney after Selznick left Metro-Goldwyn-Mayer and leased a section of the RKO Pictures lot in Culver City, California...
. It was directed by Gregory Ratoff
Gregory Ratoff
Gregory Ratoff was a Russian-born American film director, actor and producer. His most famous role as an actor was as producer Max Fabian who feuds with star Margo Channing in All About Eve ....
and produced by David O. Selznick
David O. Selznick
David O. Selznick was an American film producer. He is best known for having produced Gone with the Wind and Rebecca , both of which earned him an Oscar for Best Picture.-Early years:...
. It is a remake
Remake
A remake is a piece of media based primarily on an earlier work of the same medium.-Film:The term "remake" is generally used in reference to a movie which uses an earlier movie as the main source material, rather than in reference to a second, later movie based on the same source...
of the Swedish film Intermezzo
Intermezzo (1936 film)
Intermezzo is a 1936 Swedish drama film directed by Gustaf Molander about a concerto violinist falling in love with his daughter's piano teacher. The cast includes Gösta Ekman and Ingrid Bergman in the leads. This film led to Bergman gaining her contract with David O...
(1936
1936 in film
The year 1936 in film involved some significant events.-Events:*May 29 - Fritz Lang's first Hollywood film Fury, starring Spencer Tracy and Bruce Cabot, is released.*November 6 - first Porky Pig animated cartoon...
). The screenplay by George O'Neil was based on the screenplay of the original film by Gösta Stevens and Gustaf Molander
Gustaf Molander
Gustaf Harald August Molander was a Swedish actor and film director. His parents were the director Harald Molander, Sr. and the singer and actress Lydia Molander, née Wessler, and his brother was the director Olof Molander...
. The music was by Robert Russell Bennett
Robert Russell Bennett
Robert Russell Bennett was an American composer and arranger, best known for his orchestration of many well-known Broadway and Hollywood musicals by other composers such as Irving Berlin, George Gershwin, Jerome Kern, Cole Porter, and Richard Rodgers. In 1957 and 2008, Bennett received Tony Awards...
, Max Steiner
Max Steiner
Max Steiner was an Austrian composer of music for theatre productions and films. He later became a naturalized citizen of the United States. Trained by the great classical music composers Brahms and Mahler, he was one of the first composers who primarily wrote music for motion pictures, and as...
, Heinz Provost, and Christian Sinding
Christian Sinding
Christian August Sinding was a Norwegian composer.-Personal life:He was born in Kongsberg as a son of mine superindendent Matthias Wilhelm Sinding and Cecilie Marie Mejdell . He was a brother of the painter Otto Sinding and the sculptor Stephan Sinding...
. The cinematography was by Gregg Toland
Gregg Toland
Gregg Toland, A.S.C. was an American cinematographer noted for his innovative use of lighting and techniques such as deep focus, an example of which can be found in his work on Orson Welles' Citizen Kane.-Career:...
who replaced Harry Stradling
Harry Stradling
Harry Stradling Sr., A.S.C. was an American cinematographer with over 130 films to his credit.His uncle Walter Stradling and son Harry Stradling Jr. were also cinematographers.-Early career:...
.

It stars Leslie Howard
Leslie Howard (actor)
Leslie Howard was an English stage and film actor, director, and producer. Among his best-known roles was Ashley Wilkes in Gone with the Wind and roles in Berkeley Square , Of Human Bondage , The Scarlet Pimpernel , The Petrified Forest , Pygmalion , Intermezzo , Pimpernel Smith...
as a (married) virtuoso violin
Violin
The violin is a string instrument, usually with four strings tuned in perfect fifths. It is the smallest, highest-pitched member of the violin family of string instruments, which includes the viola and cello....
ist who falls in love with his accompanist, played by Ingrid Bergman
Ingrid Bergman
Ingrid Bergman was a Swedish actress who starred in a variety of European and American films. She won three Academy Awards, two Emmy Awards, and the Tony Award for Best Actress. She is ranked as the fourth greatest female star of American cinema of all time by the American Film Institute...
in her Hollywood debut.

It featured Oscar-nominated
Academy Awards
An Academy Award, also known as an Oscar, is an accolade bestowed by the American Academy of Motion Picture Arts and Sciences to recognize excellence of professionals in the film industry, including directors, actors, and writers...
cinematography
Cinematography
Cinematography is the making of lighting and camera choices when recording photographic images for cinema. It is closely related to the art of still photography...
by Gregg Toland
Gregg Toland
Gregg Toland, A.S.C. was an American cinematographer noted for his innovative use of lighting and techniques such as deep focus, an example of which can be found in his work on Orson Welles' Citizen Kane.-Career:...
-- later to film Citizen Kane
Citizen Kane
Citizen Kane is a 1941 American drama film, directed by and starring Orson Welles. Many critics consider it the greatest American film of all time, especially for its innovative cinematography, music and narrative structure. Citizen Kane was Welles' first feature film...
-- and a stirring main theme in Heinz Provost's piece of the same name, written previous to the film's production.

Holger Brandt, a famous virtuoso violinist, meets Anita Hoffman, his daughter's piano instructor, during a trip home. Impressed with Anita's talent, he invites her to accompany him on his next tour. The two of them soon begin a passionate affair, and Holger's wife Margit asks him for a divorce.

Knowing how much Holger misses his daughter Ann Marie and son Eric, and torn with guilt for breaking up his family, Anita leaves Holger to pursue her own career. Holger finally decides to return home and see his children again. He first travels to Ann Marie's school but is horrified when she runs into the street to greet him and is hit by a car. He takes the injured Ann Marie back to his wife's house, and confronts his angry son in an attempt to explain his infidelity.

To Holger's relief, the doctor informs him that Ann Marie will survive and eventually recover from her injuries. Margit then forgives Holger for his affair with Anita, and welcomes him back into their family.

The musical duets, with Howard and Bergman, were dubbed for the soundtrack with professional musicians; however, the actors' hands show the actual music being played: Ingrid Bergman plays the full piano parts (for Edvard Grieg
Edvard Grieg
Edvard Hagerup Grieg was a Norwegian composer and pianist. He is best known for his Piano Concerto in A minor, for his incidental music to Henrik Ibsen's play Peer Gynt , and for his collection of piano miniatures Lyric Pieces.-Biography:Edvard Hagerup Grieg was born in...
's "Concerto in A minor
Piano Concerto (Grieg)
The Piano Concerto in A minor, Op. 16, composed by Edvard Grieg in 1868, was the only concerto Grieg completed. It is one of his most popular works and among the most popular of all piano concerti.-Structure :The concerto is in three movements:...
" and Christian Sinding
Christian Sinding
Christian August Sinding was a Norwegian composer.-Personal life:He was born in Kongsberg as a son of mine superindendent Matthias Wilhelm Sinding and Cecilie Marie Mejdell . He was a brother of the painter Otto Sinding and the sculptor Stephan Sinding...
's "Rustle of Spring"), so her hand positions are correct for the music soundtrack. Leslie Howard, however, could not play the violin. As a result a professional violinist, who also held a striking resemblance to Leslie Howard, was brought in to teach proper violin posture and bowing technique. During filming this same musician, Al Sack
Al Sack
Al Sack was a conductor, composer, arranger, and violinist whose career spanned from the late 1920s up until his passing in 1947. He is primarily associated with his work on radio and records through partnerships with artists like Tony Martin, Andy Russell, Gracie Fields, Dinah Shore, and Roy...
, rested on his knees, out of the view of the camera, and did the fingering on all of the close-ups. In the film viewers see Sack’s left hand and Mr. Howards’s bowing arm and profile. Sack also doubled for Howard during the long shots in front of the orchestra.

At the crucial scene where the film's two main protagonists stand looking into the river and realize that they have fallen in love with each other, Holger Brandt (Leslie Howard) makes a casual remark on "the time when Vienna
Vienna
Vienna is the capital and largest city of the Republic of Austria and one of the nine states of Austria. Vienna is Austria's primary city, with a population of about 1.723 million , and is by far the largest city in Austria, as well as its cultural, economic, and political centre...
was a happy city". This is taken by many to be a reference to the 1938 de facto annexation of Austria
Austria
Austria , officially the Republic of Austria , is a landlocked country of roughly 8.4 million people in Central Europe. It is bordered by the Czech Republic and Germany to the north, Slovakia and Hungary to the east, Slovenia and Italy to the south, and Switzerland and Liechtenstein to the...
by Nazi Germany
Nazi Germany
Nazi Germany , also known as the Third Reich , but officially called German Reich from 1933 to 1943 and Greater German Reich from 26 June 1943 onward, is the name commonly used to refer to the state of Germany from 1933 to 1945, when it was a totalitarian dictatorship ruled by...
. However, Brandt's comment also features in the 1936 original Swedish film, which predated the Anschluss
Anschluss
The Anschluss , also known as the ', was the occupation and annexation of Austria into Nazi Germany in 1938....
.

Ingrid Bergman was in a radio adaptation of Intermezzo on Lux Radio Theater
Lux Radio Theater
Lux Radio Theater, a long-run classic radio anthology series, was broadcast on the NBC Blue Network ; CBS and NBC . Initially, the series adapted Broadway plays during its first two seasons before it began adapting films. These hour-long radio programs were performed live before studio audiences...
on January 29, 1940, which also starred Herbert Marshall
Herbert Marshall
Herbert Marshall , born Herbert Brough Falcon Marshall, was an English actor.His parents were Percy F. Marshall and Ethel May Turner. He graduated from St. Mary's College in Old Harlow, Essex and worked for a time as an accounting clerk...
. She was also in another adaptation on the same show on June 4, 1945 with Joseph Cotten
Joseph Cotten
Joseph Cheshire Cotten was an American actor of stage and film. Cotten achieved prominence on Broadway, starring in the original productions of The Philadelphia Story and Sabrina Fair...
.
The source of this article is wikipedia, the free encyclopedia.  The text of this article is licensed under the GFDL.