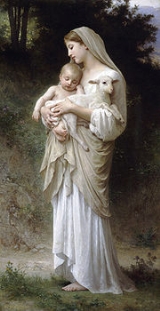 Overview
Innocence is a term used to indicate a lack of guilt
Guilt
Guilt is the state of being responsible for the commission of an offense. It is also a cognitive or an emotional experience that occurs when a person realizes or believes—accurately or not—that he or she has violated a moral standard, and bears significant responsibility for that...
, with respect to any kind of crime
Crime
Crime is the breach of rules or laws for which some governing authority can ultimately prescribe a conviction...
, sin
Sin
In religion, sin is the violation or deviation of an eternal divine law or standard. The term sin may also refer to the state of having committed such a violation. Christians believe the moral code of conduct is decreed by God In religion, sin (also called peccancy) is the violation or deviation...
, or wrongdoing. In a legal context
Criminal law
Criminal law, is the body of law that relates to crime. It might be defined as the body of rules that defines conduct that is not allowed because it is held to threaten, harm or endanger the safety and welfare of people, and that sets out the punishment to be imposed on people who do not obey...
, innocence refers to the lack of legal guilt
Guilt (law)
In criminal law, guilt is entirely externally defined by the state, or more generally a “court of law.” Being “guilty” of a criminal offense means that one has committed a violation of criminal law, or performed all the elements of the offense set out by a criminal statute...
of an individual, with respect to a crime.

The lamb
Domestic sheep
Sheep are quadrupedal, ruminant mammals typically kept as livestock. Like all ruminants, sheep are members of the order Artiodactyla, the even-toed ungulates. Although the name "sheep" applies to many species in the genus Ovis, in everyday usage it almost always refers to Ovis aries...
is a commonly used symbol of innocence. In Christianity
Christianity
Christianity is a monotheistic religion based on the life and teachings of Jesus as presented in canonical gospels and other New Testament writings...
, for example, Jesus
Jesus
Jesus of Nazareth , commonly referred to as Jesus Christ or simply as Jesus or Christ, is the central figure of Christianity...
is referred to as the "Lamb of God", thus emphasizing his sinless nature. Other symbols of innocence include child
Child
Biologically, a child is generally a human between the stages of birth and puberty. Some vernacular definitions of a child include the fetus, as being an unborn child. The legal definition of "child" generally refers to a minor, otherwise known as a person younger than the age of majority...
ren, virgins
Virginity
Virginity refers to the state of a person who has never engaged in sexual intercourse. There are cultural and religious traditions which place special value and significance on this state, especially in the case of unmarried females, associated with notions of personal purity, honor and worth...
, acacia
Acacia
Acacia is a genus of shrubs and trees belonging to the subfamily Mimosoideae of the family Fabaceae, first described in Africa by the Swedish botanist Carl Linnaeus in 1773. Many non-Australian species tend to be thorny, whereas the majority of Australian acacias are not...
branches (especially in Freemasonry
Freemasonry
Freemasonry is a fraternal organisation that arose from obscure origins in the late 16th to early 17th century. Freemasonry now exists in various forms all over the world, with a membership estimated at around six million, including approximately 150,000 under the jurisdictions of the Grand Lodge...
), non-sexual nudity
Nudity
Nudity is the state of wearing no clothing. The wearing of clothing is exclusively a human characteristic. The amount of clothing worn depends on functional considerations and social considerations...
, and the color white
White
White is a color, the perception of which is evoked by light that stimulates all three types of color sensitive cone cells in the human eye in nearly equal amounts and with high brightness compared to the surroundings. A white visual stimulation will be void of hue and grayness.White light can be...
.
A "loss of innocence" is a common theme in fiction and pop culture, and is often seen as an integral part of coming of age
Coming of age
Coming of age is a young person's transition from childhood to adulthood. The age at which this transition takes place varies in society, as does the nature of the transition. It can be a simple legal convention or can be part of a ritual, as practiced by many societies...
.

Every life is a march from innocence, through temptation, to virtue or vice.

Lyman Abbott|Lyman Abbott, quoted in The Seven Powerful Secrets of Emotional Sex‎ (2005) by A. Vishwanath, p. 144

Innocence most often is a good fortune and not a virtue.

Innocence once lost cannot be regained.

Lucifer (DC Comics)|Lucifer in The Sandman: Season of Mists by Neil Gaiman

Summer has come and passed The innocent can never last.

That's what it takes to be a hero, a little gem of innocence inside you that makes you want to believe that there still exists a right and wrong, that decency will somehow triumph in the end.

Assuredly we bring not innocence not the world, we bring impurity much rather: that which purifies us is trial, and trial is by what is contrary.

Resentment seems to have been given us by nature for a defense, and for a defense only. It is the safeguard of justice and the security of innocence.

Innocence in genius, and candor in power, are both noble qualities.