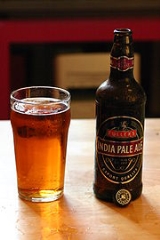 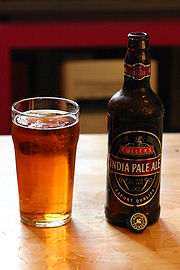 India Pale Ale or IPA is a style of beer within the broader category of pale ale
Pale ale
Pale ale is a beer which uses a warm fermentation and predominantly pale malt. It is one of the world's major beer styles.The higher proportion of pale malts results in a lighter colour. The term "pale ale" was being applied around 1703 for beers made from malts dried with coke, which resulted in a...
. It was first brewed in England in the 19th century.

The first known use of the expression "India pale ale" comes from an advertisement in the Liverpool Mercury
Liverpool Daily Post & Echo
The Liverpool Echo and Liverpool Daily Post are two newspapers published by Trinity Mirror in Liverpool, Merseyside, England. They are published Monday to Saturday, the Echo being Liverpool's evening newspaper while the Daily Post, published in Merseyside, Cheshire, and North Wales editions, is the...
newspaper published January 30, 1835. Before January 1835, and for some time after this date, this style of beer was referred to as "pale ale as prepared for India", "India Ale", "pale India ale" or "pale export India ale".

IPA descends from the earliest pale ales of the 17th century. The term pale ale originally denoted an ale which had been brewed from pale malt
Malt
Malt is germinated cereal grains that have been dried in a process known as "malting". The grains are made to germinate by soaking in water, and are then halted from germinating further by drying with hot air...
. The pale ales of the early 18th century were lightly hopped and quite different from later pale ales. By the mid-18th century, pale ale was mostly manufactured with coke-fired malt, which produced less smoking and roasting of barley in the malting process, and hence produced a paler beer. One such variety of beer was October beer, a pale well-hopped brew popular among the landed classes, who brewed it domestically; once brewed it was intended to cellar two years.

Among the earliest known named brewers whose beers were exported to India was George Hodgson of the Bow Brewery, on the Middlesex-Essex border. Bow Brewery beers became popular among East India Company
East India Company
The East India Company was an early English joint-stock company that was formed initially for pursuing trade with the East Indies, but that ended up trading mainly with the Indian subcontinent and China...
traders in the late 18th century because of the brewery's location and Hodgson's liberal credit line of 18 months. East Indiamen transported a number of Hodgson's beers to India, among them his October beer, which benefited exceptionally from conditions of the voyage and was apparently highly regarded among its consumers in India. Bow Brewery came into control of Hodgson's sons in the early 19th century, but their business practices alienated their customers. During the same period, several Burton breweries lost their European export market in Russia because of new tariffs on beer, and were seeking a new export market for their beer.
At the behest of the East India Company, Allsopp
Samuel Allsopp & Sons
Samuel Allsopp & Sons was one of the largest brewery companies operating in Burton upon Trent, England.Allsopp’s origins go back to the 1740s, when Benjamin Wilson, an innkeeper-brewer of Burton, brewed beer for his own premises and sold some to other innkeepers...
brewery developed a strongly hopped pale ale in the style of Hodgson's for export to India. Other Burton brewers, including Bass and Salt
Salt's Brewery
Thomas Salt and Co. was a brewery that operated in Burton upon Trent for 150 years.The brewery was founded in 1774 as Joseph Clay and son by Joseph Clay, described in The "British Directory" of 1791 as one of the famous "nine common brewers of Burton-on-Trent." Joseph Clay came originally from...
, were anxious to replace their lost Russian export market and quickly followed Allsopp's lead. Likely as a result of the advantages of Burton water in brewing, Burton India Pale Ale was preferred by merchants and their customers in India.

Demand for the export style of pale ale, which had become known as "India Pale Ale," developed in England around 1840 and India Pale Ale became a popular product in England. Some brewers dropped the term "India" in the late 19th century, but records indicated that these "pale ales" retained the features of earlier IPA. American, Australian and Canadian brewers manufactured beer with the label IPA before 1900, and records suggest that these beers were similar to English IPA of the era.

Hodgson's October beer style clearly influenced the Burton Brewers's India Pale Ale. His beer was only slightly higher in alcohol than most beer brewed in his day and would not have been considered a strong ale; however, a greater proportion of the wort was well-fermented, leaving behind few residual sugars, and the beer was strongly hopped. The common story that early IPAs were much stronger than other beers of the time, however, is a myth. Moreover, porter shipped to India at the same time survived the voyage, and common claims that Hodgson formulated his beer to survive the trip and that other beers would not survive the trip are probably false. It is clear that by the 1860s, India Pale Ales were widely brewed in England and that they were much more attenuated
Attenuation (brewing)
In brewing attenuation is the percentage that measures the conversion of sugars into alcohol and carbon dioxide by the fermentation process. The percentage is calculated by comparing weight or specific gravity of the extract before and after fermentation....
and highly hopped than porters and many other ales.

The term IPA is common in the United Kingdom for low-gravity beers, for example Greene King IPA and Charles Wells Eagle IPA. IPAs with an abv
ABV
ABV is a three-letter acronym that may refer to:* Alcohol by volume, a measure of the alcohol content of alcoholic drinks* Nnamdi Azikiwe International Airport, Abuja, Nigeria, from its IATA airport code...
of 4% or lower have been brewed in Britain since at least the 1920s. Some British breweries brew a stronger, American-style IPA. Examples are Meantime Brewery IPA, Dark Star
Dark Star (brewery)
Dark Star is a brewery in currently located in Partridge Green, in the county of West Sussex, England.-Name:Dark Star was originally the name of a porter developed by Rob Jones when he was employed by the Pitfield Brewery. The name comes from the Grateful Dead song Dark Star. It was highly...
APA and Freeminer Trafalgar IPA.

In 2002, Caledonian Brewery
Caledonian Brewery
Caledonian Brewery is a Scottish brewery founded in 1869 in the Shandon area of Edinburgh, Scotland. The Caley, as it is known locally, is the only survivor of over 40 breweries that operated in Edinburgh during the 19th century, although a number of independent breweries have opened in recent...
Deuchars IPA took the title of CAMRA Supreme Champion Beer of Britain at the GBBF in London. Also in this year, Hopdaemon Brewery Skrimshander IPA became a Kent Beer Festival Winner. Skrimshander is brewed with Kentish Fuggles and Goldings Hops.

In the USA, IPA is considered by some to be a distinct variant (though there isn't universal agreement), sometimes termed "American IPA".
IPA has a long history in the USA with many breweries producing a version of the style.

The Belgian-style IPA attempts to marry the American or English style IPA with traditional Belgian style ales. There are two approaches toward this style: one can increase the quantity of hops in a traditional Belgian-style ale, or one can ferment an American IPA with a Belgian yeast strain. Brasserie d'Achouffe's "Houblon", brewed in Achouffe, Belgium, is a popular example of what they call a "Dobbelen IPA Tripel". Flying Dog's "Raging Bitch" is a popular American example of a Belgian-style IPA.

Double India Pale Ales (abbreviated Double IPAs or DIPAs) are a strong, very hoppy style of pale beer. Also known as Imperial IPAs (or IIPAs), these beers have high amounts of malt
Malt
Malt is germinated cereal grains that have been dried in a process known as "malting". The grains are made to germinate by soaking in water, and are then halted from germinating further by drying with hot air...
and hops
Hops
Hops are the female flower clusters , of a hop species, Humulus lupulus. They are used primarily as a flavoring and stability agent in beer, to which they impart a bitter, tangy flavor, though hops are also used for various purposes in other beverages and herbal medicine...
. Double IPAs typically have alcohol content above 7% by volume. IBUs are in the very high range (60+). To add to the confusion however, is the fact that American "regular" IPAs (most notably the aforementioned Ballantine IPA of Newark, NJ) long had an ABV of 7.5% and was 70+ IBUs; It was a product that was actually regularly available from the mid 1930's through the 1980s.

There are some brewers that believe the name should be San Diego Pale Ale, since the style most likely started near San Diego, California – specifically a Double IPA brewed in 1994 by Vinnie Cilurzo, then head brewer of Blind Pig Brewing Company of Temecula, California (now brewmaster at Russian River Brewing Company
Russian River Brewing Company
Russian River Brewing Company is a brewery and brewpub located in downtown Santa Rosa, California.-History:Russian River Brewing Company was created in 1997 when Korbel Champagne Cellars of Guerneville, California decided to try their hand at brewing beer. Brewer Vinnie Cilurzo was hired as...
). Cilurzo claims he "accidentally" created the style by adding 50% too much malt to his mash tun. He then "corrected" this mistake by adding 100% more hops. This is up for some debate, however, as the local San Diego Pizza Port brewery claims to have been brewing "the original San Diego IPA", since 1992 when they opened their brewery (two years before Cilurzo and Blind Pig). Still others attribute the creation of this style to Rogue Ales
Rogue Ales
Rogue Ales is an American craft brewery founded in 1988 in Ashland, Oregon. The following year the company opened their second brewpub in Newport, Oregon where they are now headquartered. They operate brewpubs in Oregon, Washington, and California. Rogue exports throughout the US and internationally...
, a microbrewery in Newport, Oregon
Newport, Oregon
Newport is a city in Lincoln County, Oregon, United States. It was incorporated in 1882, though the name dates back to the establishment of a post office in 1868...
, and its I2PA beer, brewed in 1990.http://beeradvocate.com/news/stories_read/599/