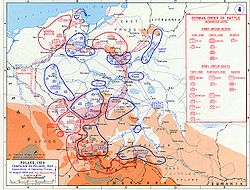 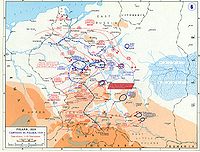 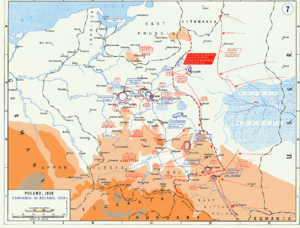 The SGO was created by the orders of Polish Commander in Chief on 9 and 11 September due to German breakthroughs and was tasked with defending the region of Polesie (see also Polesie Voivodeship
Polesie Voivodeship
Polesie Voivodeship was an administrative unit of interwar Poland . It ceased to exist in September 1939, following German and Soviet aggression on Poland .-Population:...
), defined by the lines of Muchawiec
Mukhavets River
Mukhavets , ; ) is a river in western Belarus, a tributary to the Bug River.The river rises in Pruzhany, Belarus where the Mukha river and the Viets canal are converging, flows in the south-western Belarus and empties into the Bug River in Brest....
and Prypeć
Pripyat River
The Pripyat River or Prypiat River is a river in Eastern Europe, approximately long. It flows east through Ukraine, Belarus, and Ukraine again, draining into the Dnieper....
rivers, with the towns of Brześć
Brest, Belarus
Brest , formerly also Brest-on-the-Bug and Brest-Litovsk , is a city in Belarus at the border with Poland opposite the city of Terespol, where the Bug River and Mukhavets rivers meet...
(Brest) and Pińsk
Pinsk
Pinsk , a town in Belarus, in the Polesia region, traversed by the river Pripyat, at the confluence of the Strumen and Pina rivers. The region was known as the Marsh of Pinsk. It is a fertile agricultural center. It lies south-west of Minsk. The population is about 130,000...
(where the SGO HQ was located). The SGO was to prevent Polish forces in the central Poland from being encircled from the east.

From 14 September the units of the SGO faced the German XIX Panzer Corps under Heinz Guderian
Heinz Guderian
Heinz Wilhelm Guderian was a German general during World War II. He was a pioneer in the development of armored warfare, and was the leading proponent of tanks and mechanization in the Wehrmacht . Germany's panzer forces were raised and organized under his direction as Chief of Mobile Forces...
. The forces under general Konstanty Plisowski
Konstanty Plisowski
Konstanty Plisowski was a Polish general and military commander. He is known as the commander in the Battles of Jazłowiec and Brześć. He was murdered by the Soviets in the Katyn Massacre.- Biography :...
defended the town of Brześć (Brest)
Battle of Brzesc Litewski
Battle of Brześć Litewski was a World War II battle involving German and Polish forces that took place between 14 and 17 September 1939, near the town of Brześć Litewski...
from 16 to 19 September while the forces under colonel Adam Epler defended Kobryń
Battle of Kobryn
The Battle of Kobryń was one of the battles of the Invasion of Poland. It was fought between September 14 and September 18, 1939, between the German XIX Panzer Corps of General Heinz Guderian and the improvised Polish "Kobryń" Infantry Division of Colonel Adam Epler...
from 16 to 18 September.

After the Soviet invasion of Poland on September 17
Soviet invasion of Poland (1939)
The 1939 Soviet invasion of Poland was a Soviet military operation that started without a formal declaration of war on 17 September 1939, during the early stages of World War II. Sixteen days after Nazi Germany invaded Poland from the west, the Soviet Union did so from the east...
, Kleeberg at first followed orders from Polish High Command and retreated towards Romania
Romania
Romania is a country located at the crossroads of Central and Southeastern Europe, on the Lower Danube, within and outside the Carpathian arch, bordering on the Black Sea...
n border (see Romanian Bridgehead
Romanian Bridgehead
The Romanian Bridgehead was an area in southeastern Poland, now located in Ukraine. During the Polish Defensive War of 1939 , on September 14 the Polish Commander in Chief Marshal of Poland Edward Rydz-Śmigły ordered all Polish troops fighting east of the Vistula to withdraw towards Lwów, and...
). On 22 September, cut off from his superiors, he decided to aid besieged Warsaw
Siege of Warsaw (1939)
The 1939 Battle of Warsaw was fought between the Polish Warsaw Army garrisoned and entrenched in the capital of Poland and the German Army...
. As they were running low on supplies, Kleeberg decided to recapture the town of Dęblin
Deblin
Dęblin is a town, population 19,500 , at the confluence of Vistula and Wieprz rivers, in Lublin Voivodeship, Poland. Dęblin is the part of the agglomeration with adjacent towns of Ryki and Puławy, which altogether has over 100 000 inhabitants....
, where Polish Army had large stores of supplies.
On 28 September Warsaw capitulated; Kleeberg - at that time having crossed Bug river
Bug River
The Bug River is a left tributary of the Narew river flows from central Ukraine to the west, passing along the Ukraine-Polish and Polish-Belarusian border and into Poland, where it empties into the Narew river near Serock. The part between the lake and the Vistula River is sometimes referred to as...
near Włodawa - decided that they units will advance west and organize large scale partisan
Partisan (military)
A partisan is a member of an irregular military force formed to oppose control of an area by a foreign power or by an army of occupation by some kind of insurgent activity...
warfare from local forest complexes near Świętokrzyskie Mountains
Swietokrzyskie Mountains
Świętokrzyskie Mountains , are a mountain range in central Poland, in the vicinity of the city of Kielce. The mountain range consists of a number of separate ranges, the highest of which is Łysogóry . The two highest peaks are Łysica at 612 meters and Łysa Góra at 593 meters...
. In the days of 29–30 September the units were engaged by the Soviet Red Army
Red Army
The Workers' and Peasants' Red Army started out as the Soviet Union's revolutionary communist combat groups during the Russian Civil War of 1918-1922. It grew into the national army of the Soviet Union. By the 1930s the Red Army was among the largest armies in history.The "Red Army" name refers to...
but were able to defeat them. From 2 October the SGO, at that point the last organized regular unit of the Polish Army, fought against the German forces of XIV Mechanized Corps in the battle of Kock
Battle of Kock (1939)
The Battle of Kock, was the final battle in the Invasion of Poland at the beginning of World War II. It took place between 2–5 October 1939, near the town of Kock, in Poland....
. Despite immense German numerical superiority, the Polish forces were able to score several tactical victories; however they were increasingly running low on supplies, including ammunition. Hence on 5 October Kleeberg decided to capitulate
Capitulation (surrender)
Capitulation , an agreement in time of war for the surrender to a hostile armed force of a particular body of troops, a town or a territory....
; the fighting ended on the early hours of October 6. He was the last Polish general to capitulate in the Polish Defensive War; he is also considered one of the few Polish generals of the September 1939 campaign to have not been defeated in battle (along with Gen. Maczek).

The SGO was commanded by general Franciszek Kleeberg
Franciszek Kleeberg
Franciszek Kleeberg was a Polish general. He served in the Austro-Hungarian Army before joining the Polish Legions in World War I and later the Polish Army. During the German Invasion of Poland he commanded Independent Operational Group Polesie...
, his chief of staff was colonel M. Łapicki. Kleeberg was tasked with organizing his group from various small units in Polesie region; most of them were either reserve and mobilizing or second line such as the National Defense
National Defense (Poland)
National Defense was a volunteer military formation of the Second Polish Republic.Its units were subordinated to various Polish corps and armies....
units; the notable exception were the elite Border Protection Corps
Border Protection Corps
The Border Protection Corps was a Polish military formation that was created in 1924 to defend the country's eastern borders against armed Soviet incursions and local bandits....
(KOP) units and the Riverine Flotilla of the Polish Navy
Riverine Flotilla of the Polish Navy
The Riverine Flotilla of the Polish Navy , better known as the Pinsk Flotilla, was the inland branch of the Polish Navy operating on the Vistula river and in the area of the Pinsk Marshes between the Polish-Bolshevik War and World War II...
.

On 14 September, when the group was engaged by German forces, it was composed of:

On 29 September, after reorganization, the group was composed of:

Final Order of General Keeberg to his soldiers