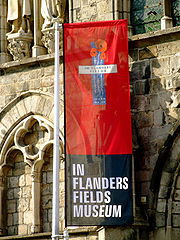 The In Flanders' Fields Museum is devoted to the study of World War I
World War I
World War I , which was predominantly called the World War or the Great War from its occurrence until 1939, and the First World War or World War I thereafter, was a major war centred in Europe that began on 28 July 1914 and lasted until 11 November 1918...
and occupies the second floor of the Cloth Hall, Ypres
Cloth Hall, Ypres
The Cloth Hall , of Ypres, Belgium, was one of the largest commercial buildings of the Middle Ages, when it served as the main market and warehouse for the Flemish city's prosperous cloth industry. The original structure, erected mainly in the 13th century and completed 1304, lay in ruins after...
in Belgium
Belgium
Belgium , officially the Kingdom of Belgium, is a federal state in Western Europe. It is a founding member of the European Union and hosts the EU's headquarters, and those of several other major international organisations such as NATO.Belgium is also a member of, or affiliated to, many...
. The building was virtually destroyed by artillery fire during the Battles of Ypres and has been reconstructed. The curator, Piet Chielens
Piet Chielens
Piet Chielens a Belgian writer, translator and curator. He is coordinator of the In Flanders Fields Museum in Ypres in Belgium. He is also artistic director of Vredesconcerten Passendale ....
, is a World War I historian. The museum is named for the famous poem
In Flanders Fields
"In Flanders Fields" is one of the most notable poems written during World War I, created in the form of a French rondeau. It has been called "the most popular poem" produced during that period...
by Canadian John McCrae
John McCrae
Lieutenant Colonel John Alexander McCrae was a Canadian poet, physician, author, artist and soldier during World War I and a surgeon during the Second Battle of Ypres...
.

Visitors to the museum will find no glorification of war; rather the museum suggests the futility of war, especially as seen in Flanders in World War I.