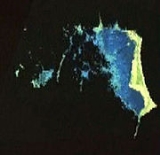 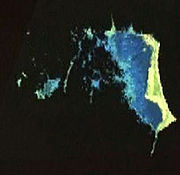 Seskar is an island in the Gulf of Finland
Gulf of Finland
The Gulf of Finland is the easternmost arm of the Baltic Sea. It extends between Finland and Estonia all the way to Saint Petersburg in Russia, where the river Neva drains into it. Other major cities around the gulf include Helsinki and Tallinn...
, part of the Leningrad Oblast
Leningrad Oblast
Leningrad Oblast is a federal subject of Russia . It was established on August 1, 1927, although it was not until 1946 that the oblast's borders had been mostly settled in their present position...
of Russia
Russia
Russia or , officially known as both Russia and the Russian Federation , is a country in northern Eurasia. It is a federal semi-presidential republic, comprising 83 federal subjects...
. The island was an independent municipality of Finland populated by Finns at least since 16th century, until 1940, when ownership was transferred to the Soviet Union
Soviet Union
The Soviet Union , officially the Union of Soviet Socialist Republics , was a constitutionally socialist state that existed in Eurasia between 1922 and 1991....
following the Moscow Peace Treaty. The ownership was ratified after World War II
World War II
World War II, or the Second World War , was a global conflict lasting from 1939 to 1945, involving most of the world's nations—including all of the great powers—eventually forming two opposing military alliances: the Allies and the Axis...
.

The municipality Seiskari had been formed from the Koivisto municipality in 1903, and belonged to the province of Viipuri
Viipuri Province
The Viipuri Province was a province of independent Finland from 1917 to 1947 but had already been founded in 1743.-History:The province was established in 1743 by separating the city of Viipuri and territories ceded from the Swedish Empire to Russia by the Treaty of Nystad in 1721, from the Saint...
and to the South Karelia
South Karelia
South Karelia is a region of Finland. It borders to the regions of Kymenlaakso, Southern Savonia, North Karelia and to Russia. The term "South Karelia" might also be used to refer to the southern parts of the entire Karelia — the Region of South Karelia is termed "South" because it is the...
region.
The source of this article is wikipedia, the free encyclopedia.  The text of this article is licensed under the GFDL.