Encyclopedia
Illimani is the highest mountain
Mountain
Image:Himalaya_annotated.jpg|thumb|right|The Himalayan mountain range with Mount Everestrect 58 14 160 49 Chomo Lonzorect 200 28 335 52 Makalurect 378 24 566 45 Mount Everestrect 188 581 920 656 Tibetan Plateaurect 250 406 340 427 Rong River...
in the Cordillera Real
Cordillera Real (Bolivia)
The Cordillera Real is a mountain range in the South American Altiplano of Bolivia. This range of fold mountains, largely composed of granite, is located southeast of Lake Titicaca, and east of the Bolivian capital of La Paz, measuring 125 km in length and 20 km in width...
(part of the Cordillera Oriental, a subrange of the Andes
Andes
The Andes is the world's longest continental mountain range. It is a continual range of highlands along the western coast of South America. This range is about long, about to wide , and of an average height of about .Along its length, the Andes is split into several ranges, which are separated...
) of western Bolivia
Bolivia
Bolivia officially known as Plurinational State of Bolivia , is a landlocked country in central South America. It is the poorest country in South America...
. It lies just south of La Paz
La Paz
Nuestra Señora de La Paz is the administrative capital of Bolivia, as well as the departmental capital of the La Paz Department, and the second largest city in the country after Santa Cruz de la Sierra...
at the eastern edge of the Altiplano
Altiplano
The Altiplano , in west-central South America, where the Andes are at their widest, is the most extensive area of high plateau on Earth outside of Tibet...
. It is the second highest peak in Bolivia, after Nevado Sajama
Nevado Sajama
Nevado Sajama is an extinct stratovolcano and the highest peak in Bolivia. The mountain is located in the Oruro Department, Sajama Province, Curahuara de Carangas Municipality, Sajama Canton. It is situated in the Sajama National Park in the southwest area of the country some 16–24 km from...
, and the eighteenth highest peak in South America
South America
South America is a continent situated in the Western Hemisphere, mostly in the Southern Hemisphere, with a relatively small portion in the Northern Hemisphere. The continent is also considered a subcontinent of the Americas. It is bordered on the west by the Pacific Ocean and on the north and east...
. The snow line lies at about 4570 metres (14,993.4 ft) above sea level, and glaciers are found on the northern face at 4983 m (16,348.4 ft). The mountain has four main peaks; the highest is the south summit, Nevado Illimani, which is a popular ascent for mountain climbers.

Geologically, Illimani is composed primarily of granodiorite
Granodiorite
Granodiorite is an intrusive igneous rock similar to granite, but containing more plagioclase than orthoclase-type feldspar. Officially, it is defined as a phaneritic igneous rock with greater than 20% quartz by volume where at least 65% of the feldspar is plagioclase. It usually contains abundant...
, intruded during the Cenozoic era into the sedimentary rock
Sedimentary rock
Sedimentary rock are types of rock that are formed by the deposition of material at the Earth's surface and within bodies of water. Sedimentation is the collective name for processes that cause mineral and/or organic particles to settle and accumulate or minerals to precipitate from a solution....
which forms the bulk of the Cordillera Real.

Illimani is quite visible from the city of La Paz
La Paz
Nuestra Señora de La Paz is the administrative capital of Bolivia, as well as the departmental capital of the La Paz Department, and the second largest city in the country after Santa Cruz de la Sierra...
and is its major landmark. The mountain has been the subject of many local songs, most importantly "Illimani", with the following refrain: "¡Illimani, Illimani, sentinela tu eres de La Paz! ¡Illimani, Illimani, patrimonio eres de Bolivia!"

Illimani was first attempted in 1877 by the French explorator Charles Wiener
Charles Wiener
Charles Wiener was an Austrian-French scientist-explorer. Born in Vienna, he is perhaps best known as the explorer who traveled extensively in Peru, climbed the Illimani and came close to re-discovering Machu Picchu.-Biography:...
, J. de Grumkow, and J. C. Ocampo. They failed to reach the main summit, but did reach a southeastern subsummit, on 19 May 1877, Wiener named it the "Pic de Paris", and left a French flag on top of it.
In 1898, British
United Kingdom
The United Kingdom of Great Britain and Northern IrelandIn the United Kingdom and Dependencies, other languages have been officially recognised as legitimate autochthonous languages under the European Charter for Regional or Minority Languages...
climber William Martin Conway and two Swiss
Switzerland
Switzerland name of one of the Swiss cantons. ; ; ; or ), in its full name the Swiss Confederation , is a federal republic consisting of 26 cantons, with Bern as the seat of the federal authorities. The country is situated in Western Europe,Or Central Europe depending on the definition....
guides, A. Maquignaz and L. Pellissier, made the first recorded ascent of the peak, again from the southeast. (They found a piece of Aimara rope at over 6000 m (19,685 ft), so an earlier ascent cannot be completely discounted.)

The current standard route on the mountain climbs the west ridge of the main summit. It was first climbed in 1940, by the Germans
Germany
Germany , officially the Federal Republic of Germany , is a federal parliamentary republic in Europe. The country consists of 16 states while the capital and largest city is Berlin. Germany covers an area of 357,021 km2 and has a largely temperate seasonal climate...
R. Boetcher, F. Fritz, and W. Kühn, and is graded French PD+/AD-
Grade (climbing)
In rock climbing, mountaineering and other climbing disciplines, climbers give a climbing grade to a route that concisely describes the difficulty and danger of climbing the route...
. This route usually requires four days, whereas the summit is reached in the morning of the third day. 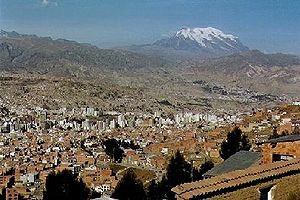