Encyclopedia
The Iguazu River is a river in Brazil
Brazil
Brazil , officially the Federative Republic of Brazil , is the largest country in South America. It is the world's fifth largest country, both by geographical area and by population with over 192 million people...
and Argentina
Argentina
Argentina , officially the Argentine Republic , is the second largest country in South America by land area, after Brazil. It is constituted as a federation of 23 provinces and an autonomous city, Buenos Aires...
. It is an important tributary of the Paraná River
Paraná River
The Paraná River is a river in south Central South America, running through Brazil, Paraguay and Argentina for some . It is second in length only to the Amazon River among South American rivers. The name Paraná is an abbreviation of the phrase "para rehe onáva", which comes from the Tupi language...
. The Iguazu River is 1320 kilometres (820.2 mi) long, with a drainage basin
Drainage basin
A drainage basin is an extent or an area of land where surface water from rain and melting snow or ice converges to a single point, usually the exit of the basin, where the waters join another waterbody, such as a river, lake, reservoir, estuary, wetland, sea, or ocean...
of 62000 square kilometres (23,938.3 sq mi). 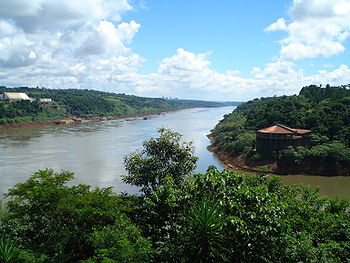 The Iguazu originates in the Serra do Mar
Serra do Mar
Serra do Mar is a 1,500 km long system of mountain ranges and escarpments in Southeastern Brazil, which runs in parallel to the Atlantic Ocean coast from the state of Espírito Santo to southern Santa Catarina, although some include Serra Geral in the Serra do Mar, in which case this range...
coastal mountains of the Brazilian state of Paraná
Paraná (state)
Paraná is one of the states of Brazil, located in the South of the country, bordered on the north by São Paulo state, on the east by the Atlantic Ocean, on the south by Santa Catarina state and the Misiones Province of Argentina, and on the west by Mato Grosso do Sul and the republic of Paraguay,...
. For 1205 kilometres (748.8 mi), to its confluence with the San Antonio River, the Iguazu flows west through Paraná State, Brazil. Downriver from the confluence the Iguazu River forms the boundary between Brazil and Argentina's Misiones Province
Misiones Province
Misiones is one of the 23 provinces of Argentina, located in the northeastern corner of the country in the Mesopotamiсa region. It is surrounded by Paraguay to the northwest, Brazil to the north, east and south, and Corrientes Province of Argentina to the southwest.- History :The province was...
. Continuing west, the river drops off a plateau, forming Iguazu Falls
Iguazu Falls
Iguazu Falls, Iguassu Falls, or Iguaçu Falls are waterfalls of the Iguazu River located on the border of the Brazilian State of Paraná and the Argentine Province of Misiones. The falls divide the river into the upper and lower Iguazu. The Iguazu River originates near the city of Curitiba. It flows...
. The falls are within national parks in both Brazil, Iguaçu National Park
Iguaçu National Park
Iguaçu National Park is a national park in Paraná State, Brazil.Created by federal decree nr. 1035 of January 10, 1939, the Park comprises a total area of 185,262.5 hectares and a length of about 420km, 300km of which are natural borders by bodies of water and the Brazilian and Argentinean sides...
, and Argentina, Iguazú National Park
Iguazú National Park
The Iguazú National Park is a national park of Argentina, located in the Iguazú Department, in the north of the province of Misiones, Argentine Mesopotamia. It has an area of . -History:...
. It empties into the Paraná River at the point where the borders of Argentina, Brazil, and Paraguay
Paraguay
Paraguay , officially the Republic of Paraguay , is a landlocked country in South America. It is bordered by Argentina to the south and southwest, Brazil to the east and northeast, and Bolivia to the northwest. Paraguay lies on both banks of the Paraguay River, which runs through the center of the...
join, and area known as the Triple Frontier
Triple Frontier
The Triple Frontier is a tri-border area along the junction of Paraguay, Argentina, and Brazil, where the Iguazú and Paraná rivers converge. Near the convergence are the cities of Ciudad del Este, Alto Paraná; Puerto Iguazú, Misiones and Foz do Iguaçu, Paraná...
.
The source of this article is wikipedia, the free encyclopedia.  The text of this article is licensed under the GFDL.