Encyclopedia
Idan is a moshav
Moshav
Moshav is a type of Israeli town or settlement, in particular a type of cooperative agricultural community of individual farms pioneered by the Labour Zionists during the second aliyah...
in Arava
Arabah
The Arabah , also known as Aravah, is a section of the Great Rift Valley running in a north-south orientation between the southern end of the Sea of Galilee down to the Dead Sea and continuing further south where it ends at the Gulf of Aqaba. It includes most of the border between Israel to the...
region of southern Israel
Israel
The State of Israel is a parliamentary republic located in the Middle East, along the eastern shore of the Mediterranean Sea...
. It belongs to the Central Arava Regional Council
Central Arava Regional Council
The Central Arava Regional Council is a Regional Council in the South District of Israel.It encompasses 7 or 8 settlements near the eastern border of Israel, south of the Dead Sea...
.

It was founded in 1980 by immigrants to Israel
Aliyah
Aliyah is the immigration of Jews to the Land of Israel . It is a basic tenet of Zionist ideology. The opposite action, emigration from Israel, is referred to as yerida . The return to the Holy Land has been a Jewish aspiration since the Babylonian exile...
from Canada
Canada
Canada is a North American country consisting of ten provinces and three territories. Located in the northern part of the continent, it extends from the Atlantic Ocean in the east to the Pacific Ocean in the west, and northward into the Arctic Ocean...
, the United States
United States
The United States of America is a federal constitutional republic comprising fifty states and a federal district...
and South Africa
South Africa
The Republic of South Africa is a country in southern Africa. Located at the southern tip of Africa, it is divided into nine provinces, with of coastline on the Atlantic and Indian oceans...
, who organized for the effort in 1976. It is named for Idan Stream, which flows near the moshav. This was in turn named after the Arab name for the stream, Wadi al-Aidan. In 2005, it had a population of 150. After the Israel–Jordan peace treaty, some of the lands of Idan were handed over to Jordan.

Between Idan and Hatzeva is a service road, called Peace Road. The Jewish National Fund
Jewish National Fund
The Jewish National Fund was founded in 1901 to buy and develop land in Ottoman Palestine for Jewish settlement. The JNF is a quasi-governmental, non-profit organisation...
paved the Peace Route, along the border between Israel and Jordan, for the benefit of central Arava inhabitants, following the Israel-Jordan Peace Treaty of 1994. The road runs along the foot of the Arava Cliffs, opposite the Edom Mountains, and is surrounded by agricultural fields and sandy expanses. A picnic area, lookouts and a trail have been built along the way. The road allows easy access to the eastern part of the Shezaf Nature Reserve. 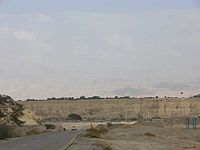 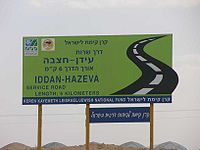