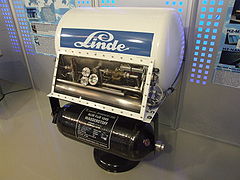 Mazda has developed Wankel engine
Wankel engine
The Wankel engine is a type of internal combustion engine using an eccentric rotary design to convert pressure into a rotating motion instead of using reciprocating pistons. Its four-stroke cycle takes place in a space between the inside of an oval-like epitrochoid-shaped housing and a rotor that...
s that burn hydrogen. The advantage of using ICE (internal combustion engine) such as wankel and piston engines is that the cost of retooling for production is much lower. Existing-technology ICE can still be used to solve those problems where fuel cells are not a viable solution as yet, for example in cold-weather applications.

Recently, BMW
BMW
Bayerische Motoren Werke AG is a German automobile, motorcycle and engine manufacturing company founded in 1916. It also owns and produces the Mini marque, and is the parent company of Rolls-Royce Motor Cars. BMW produces motorcycles under BMW Motorrad and Husqvarna brands...
tested a supercar, fueled by a hydrogen ICE, which achieved 187 mph (301 km/h) in tests. At least two of these concepts have been manufactured.

HICE forklift trucks have been demonstrated based on converted diesel internal combustion engines with direct injection.

The combustion of hydrogen with oxygen produces water as its only product:


The combustion of hydrogen with air can also produce oxides of nitrogen, though at negligibly small amounts. Tuning a hydrogen engine to create the most amount of emissions as possible results in emissions comparable with consumer operated gasoline engines from 1976.

Difference between a hydrogen ICE from a traditional gasoline engine could include hardened valves and valve seats, stronger connecting rods, non-platinum tipped spark plugs, higher voltage ignition coil, fuel injectors designed for a gas instead of a liquid, larger crankshaft damper, stronger head gasket material, modified (for supercharger) intake manifold, positive pressure supercharger, and a high temperature engine oil. All modifications would amount to about one point five times (1.5) the current cost of a gasoline engine. These hydrogen engines burn fuel in the same manner that gasoline engines do.