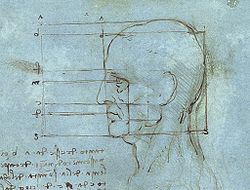 In human anatomy, the head is the upper portion of the human body
Human body
The human body is the entire structure of a human organism, and consists of a head, neck, torso, two arms and two legs.By the time the human reaches adulthood, the body consists of close to 100 trillion cells, the basic unit of life...
. It supports the face
Face
The face is a central sense organ complex, for those animals that have one, normally on the ventral surface of the head, and can, depending on the definition in the human case, include the hair, forehead, eyebrow, eyelashes, eyes, nose, ears, cheeks, mouth, lips, philtrum, temple, teeth, skin, and...
and is maintained by the skull
Human skull
The human skull is a bony structure, skeleton, that is in the human head and which supports the structures of the face and forms a cavity for the brain.In humans, the adult skull is normally made up of 22 bones...
, which itself encloses the brain
Human brain
The human brain has the same general structure as the brains of other mammals, but is over three times larger than the brain of a typical mammal with an equivalent body size. Estimates for the number of neurons in the human brain range from 80 to 120 billion...
.

For human
Human
Humans are the only living species in the Homo genus...
s, the head and particularly the face
Face
The face is a central sense organ complex, for those animals that have one, normally on the ventral surface of the head, and can, depending on the definition in the human case, include the hair, forehead, eyebrow, eyelashes, eyes, nose, ears, cheeks, mouth, lips, philtrum, temple, teeth, skin, and...
are the main distinguishing feature between different people, due to their easily discernible features such as hair and eye color, nose, eye and mouth shapes, wrinkles, etc. Human faces are easily differentiable to us due to our brains' predispositions toward discriminating human facial forms. When observing a relatively unfamiliar species, all faces seem nearly identical, and human infants are biologically programmed to recognize subtle differences in anthropic facial features.

People who are more intelligent than normal are sometimes depicted in cartoons as having bigger heads, as a way of indicating that they have a larger brain; in science fiction
Science fiction
Science fiction is a genre of fiction dealing with imaginary but more or less plausible content such as future settings, futuristic science and technology, space travel, aliens, and paranormal abilities...
, an extraterrestrial
Extraterrestrial life in popular culture
In popular cultures, "extraterrestrials" are life forms — especially intelligent life forms— that are of extraterrestrial origin .-Historical ideas:-Pre-modern:...
having a big head is often symbolic of high intelligence. Outside of this symbolic depiction, however, advances in neurobiology have shown that the functional diversity of the brain means that a difference in overall brain size is not a reliable indicator of how much, if any, difference in overall intelligence exists between two humans.

The head is a source for many metaphors and metonymies in human language, including referring to things typically near the human head ( "the head of the bed"), things physically similar to the way a head is arranged spatially to a body ("the head of the table"), metaphorically ("the head of the class/FBI"), and things that represent some characteristic we associate with the head, such as intelligence ("there are a lot of good heads in this company"). These examples are all from English, but only some are possible expressions in other languages (depending on the language). (See Lakoff and Johnson 1980, 1999)

Ancient Greeks had a method for evaluating sexual attractiveness based on the Golden Ratio
Golden ratio
In mathematics and the arts, two quantities are in the golden ratio if the ratio of the sum of the quantities to the larger quantity is equal to the ratio of the larger quantity to the smaller one. The golden ratio is an irrational mathematical constant, approximately 1.61803398874989...
, part of which included measurements of the head.

In many cultures, covering the head is seen as a sign of respect. Often, some or all of the head must be covered and veiled when entering holy places, or places of prayer. For many centuries, women in Europe, the Middle East
Middle East
The Middle East is a region that encompasses Western Asia and Northern Africa. It is often used as a synonym for Near East, in opposition to Far East...
, and South Asia
South Asia
South Asia, also known as Southern Asia, is the southern region of the Asian continent, which comprises the sub-Himalayan countries and, for some authorities , also includes the adjoining countries to the west and the east...
have covered their hair as a sign of modesty. This trend has changed drastically in Europe in the 20th century, although is still observed in other parts of the world. In addition, a number of religious paths require men to wear specific head clothing—such as the Islamic Taqiyah, Jewish yarmulke, or the Sikh turban; or Muslim women, who cover their hair, ears, and neck with a scarf.

People may cover the head for other reasons. A hat
Hat
A hat is a head covering. It can be worn for protection against the elements, for ceremonial or religious reasons, for safety, or as a fashion accessory. In the past, hats were an indicator of social status...
, is a piece of clothing covering just the top of the head. This may be part of a uniform, such as a police
Police
The police is a personification of the state designated to put in practice the enforced law, protect property and reduce civil disorder in civilian matters. Their powers include the legitimized use of force...
uniform, a protective device such as a hard hat
Hard hat
A hard hat is a type of helmet predominantly used in workplace environments, such as construction sites, to protect the head from injury by falling objects, impact with other objects, debris, bad weather and electric shock. Inside the helmet is a suspension that spreads the helmet's weight over the...
, a covering for warmth, or a fashion accessory.